“You can’t ignore Bollywood if you are in India,” exclaimed the lady playing host on stage. Soon there were glamorous artistes in glittery costumes dancing to Bollywood hit tunes. They imitated the moves of the 1960’s dancing queen Helen and actress Aishwarya Rai Bachchan. A “Journey of fifty years of Indian cinema” was showcased as the foreign delegates had their first official dinner on the opening day of CoP 11 in Hyderabad. The magic seemed to have worked on some. Many delegates couldn’t resist dancing to the songs. The wide choice of drinks and food from around the world and from the Indian states added zing to the gala event.

As the CoP 11 progresses, it seems the government and the organisers seem to be leaving no stone unturned to impress the foreign delegates who, in turn, seem to be enjoying it. “Very few CoPs have had such an electrifying opening function. It set the excitement soaring right from the beginning,” said Marie May Jermie who is part of the delegation from Seychelles Islands from Africa. The fact that CoP 11 does not have any protocol to negotiate also seems to be giving the delegates that breathing space which is generally hard to find at such high level conferences. 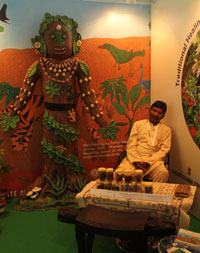 “This is my 10th CoP. Here, the discussions are going on more smoothly than in the earlier CoPs. The atmosphere is quite relaxed. There are no controversial agendas to be fought for,” said Jeffrey McNeely, senior science advisor with the International Union for Conservation of Nature (IUCN) in Switzerland. He has been associated with the team that framed the draft for the Convention on Biological Diversity.

The Indian participants are, however, not amused. The food costs are pinching them. “A burger costs Rs 250. Many Indian NGO’s can't afford this price. At times, we have to barge into the side events of others to get the food,” said an Indian NGO member. Pointing to the life-size soft toys of tigers placed in front of the food court, an Indian journalist commented: “it seems tigers and Bollywood are the USP of India. You can't do away with them, even if you have to bring dummies for them. During the inaugural dinner, where the Bollywood tamasha was happening, there were a few folk artistes who seemed lost looking for food after their performance. A few of them moved out quietly on finding no help.”

While the main negotiations seem to be going on smoothly, there seems to be utter mismanagement in the side events, haats and exhibitions. The venue of the side events and exhibition is half a kilometre away from the main venue of the conference and every time visitors have to go through elaborate security checks. “This has limited the footfall of the delegates to the exhibition. I wish they had made it a little more compact,” said Naomi Kanyugo, a delegate from Nigeria. The spread of the venue has led to many participants getting lost. Even the volunteers seem to have no idea of the venues at times. “Its so chaotic. There have been cancellations of side events at the last moment, apparently because the organisers could not arrange space for them,” said member of a Delhi-based NGO. The organisers expect the footfall to the exhibitions to rise as more delegates arrive. Only 6,000 participants have arrived so far as against the 16,000 who have registered.

As far as the negotiations of the CoP are concerned, the delegates are upbeat. Saleh Al-Saadi from Oman feels the discussions are progressing in the right direction. He is the head of the biodiversity development department of his government. “In the Nagoya Conference there were a few drastic decisions to be made. But in Hyderabad, the focus is how to implement those decisions. Delegates are serious about the issues and they are actively participating in the discussions,” said Al-Saadi.

Justino Biai from the West African nation of Guniea-Bissau says it's too early to assess the progress of the conference. “There is so much discussion on the implementation of the Strategic Plan and Aichi Targets. Now, we have to move forward from making agendas to implementing them," he says.

The 30-member team of Indian delegates, led by M F Farooqui, special secretary with the Union Ministry for Environment and Forests, seems content already with the outcome of the sixth Meeting of Parties (MoP 6) to the Cartagena Protocol. “The MoP was a success. The decision to form an ad hoc technical expert committee  to look into the socio-economic aspects of the genetically-modified organisms (GMOs) is a positive outcome.

The global overview will be developed keeping in mind the national and regional specificities,” said Sachin Chaturvedi, a delegate in the Indian team and senior research fellow at the Research and Information System for Developing Countries, a policy research Institute in New Delhi. “ It was India which suggested adding this national and regional perspective in the decision,” said Chaturvedi. This not a forum where you can push your national agenda, he said. There will be deliberations on each and every word. “Since decision has been made to formulate a ad hoc committee on socio-economic impacts, the process will go forward,” he said.