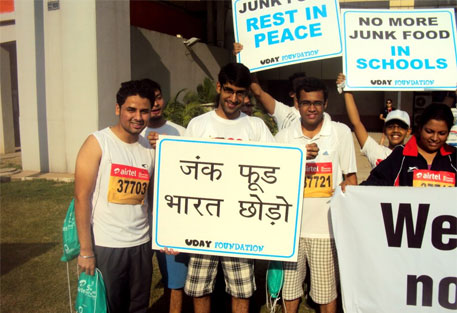 The Delhi High Court on Wednesday reserved its order on the petition seeking ban on sale of junk food in and around schools of Delhi. Chief Justice G Rohini and Justice R S Endlaw heard the concluding arguments relating to availability and exposure of school children to junk food. The case was being heard for the past five years and brought to public attention the health of school-going children, disease burden on the nation on one hand and the commercial interests of the food industry on the other. The court heard all parties, primarily over the submission filed by amicus curiae Sanyat Lodha (see pdf) before reserving the order.

The proceedings focused on two key aspects with reference to what Lodha submitted last week after having reviewed the guidelines filed by the Food Safety and Standards Authority of India (FSSAI) in March 2014, which were developed by an expert committee as directed by a court order of September 2013. The legal representatives of the industry associations argued against the inclusion of the term “junk food” and complete ban of junk food in and around schools, both of which have been strongly suggested by the amicus curiae in his submission.

That the expert committee had meetings with several stakeholders, including those holding contrary view points, and that the guidelines submitted by them did not include the term “junk food” and recommend restriction of HFSS foods (foods high in fat, salt and sugar) instead of a banning them was brought to the notice of the court several times. So, there is no point in considering what the amicus curiae suggested as expert committee members have agreed otherwise. Senior advocate Ashok Desai led the argument.

Dissent in expert committee
Is this argument correct? A closer look at the guidelines indicates a different level of consensus among the members of the expert committee. There is a clear dissent note, indicating that some members, particularly pediatricians and nutritionists believed that such foods should be banned. Considering that their dissent has been recorded, it is evident that they had a strong opinion and the group collectively agreed to disagree on this. Along with non-industry members of the expert group, Delhi non-profit Centre for Science and Environment also has been arguing that junk food should be banned from schools. It has already highlighted about the last-minute dilution made to the guidelines, thereby making them ineffective in addressing the prayers in the PIL.

The amicus curiae strongly backed his submission on these two key points and also emphasised the implementation of such guidelines. The bench assured it will consider what has been submitted. Referring to several sections of the Food Safety and Standards (FSS) Act, advocate Mehmood Pracha, who was representing FSSAI, made a point that the FSS Act can take care of implementation part.

The date of the final verdict is yet to be announced.

In the High Court of Delhi in the matter of Uday Foundation for Congenital Defects and Rare Blood Groups Vs Union of India & Others dated 18/02/2015 regarding submission on draft guidelines to ban junk food in Delhi schools, 18/02/2015