Delhi’s dream of clean air goes up in smoke

Delhi lags behind Beijing in controlling air pollution, shows an assessment of air quality data and pollution control measures in the two capital cities by non-profit Centre for Science and Environment (CSE). These cities need to clean up their air, but Delhi seems to lack Beijing’s scale, stringency and pace of action. CSE reviewed the official winter air quality data of Delhi (from October 1, 2013, to January 31, 2014) and found that the level of particulate matter less than 2.5 micron (PM2.5), the tiny particles that go deep inside the lungs, is dangerous. On two occasions during smog episodes (December 18 and January 5), PM2.5 levels had exceeded 10 and 8 times the permissible limits. Delhi could meet the standard on only three days during this period. But on 33 per cent of the days monitored this winter, daily levels were between 240 and 360 µg per cubic metre. On 14 per cent of the days, PM2.5 levels were higher than 350 µg per cubic metre. This is in sharp contrast to the official position of IITM-SAFAR, one of government’s monitoring agencies in Delhi, that claimed on February 1, 2014, that levels “hardly ever touched 350 µg per cubic metre”. In January 2014 alone, the levels had crossed 350 µg per cubic metre on nine days, shows Delhi Pollution Control Committee data. In the past four months, only one day would qualify as excellent and four days as good if Beijing’s health alert system is applied to Delhi’s winter pollution 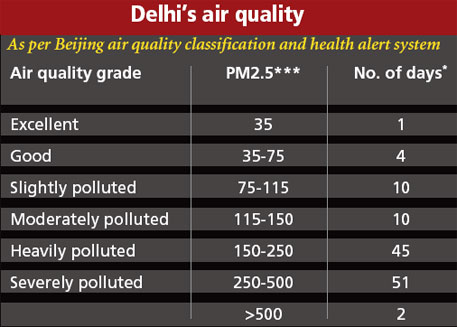 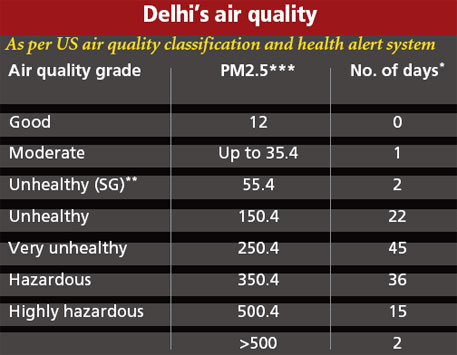