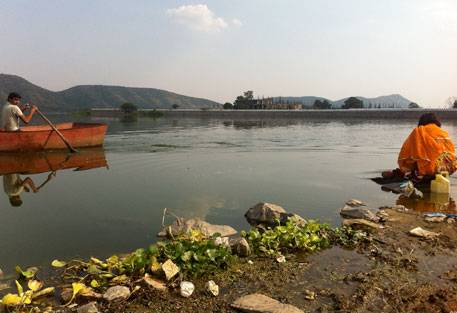 Several residents of Tila Khera village have the right to cultivate in Udaisagar Lake, 13 km east of Udaipur. The lake has an island which is located above the high flood level. When water recedes in the lean season, 18 villagers access the 8 ha land mass to cultivate vegetables. The island was, however, forcibly acquired from them in 2009-10; the builder Vardha Enterprises erected a boundary wall on the island. An approach road was built and construction work commenced. Last month, the Rajasthan High Court ordered demolition of all construction within two months on the ground that the project proponents illegally built an approach road, splitting the lake into parts; it also failed to obtain the statutory clearances for construction.

The acquisition process was dubious as well. The 18 villagers who owned rights to cultivate, say that state police officials barged into their homes, threatened them at gun point and told them that their lives would be a living hell, and that their children would be thrown under trucks if they did not sell their share. Some sold out early, accepting payment at the rate of around Rs 2 lakh per bigha (8.7 bighas make a hectare). Some held out for a year as the contractor brazenly dumped silt on standing crops. Eventually, all gave in, fearing the safety of their families. 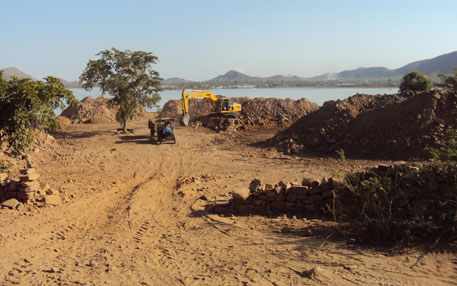 Few have spoken out about the nature of the transactions. But with assurances from the Jheel Sanrakshan Samiti (JSS), an Udaipur-based non-profit, Lalu Ram, one of the last to sell out, recalled the fear that gripped the village during the time of acquisition.

Fallout of court order to clean up lakes

The High Court, in 2007, had pronounced its final verdict on the public interest petition filed by JSS in 1997. The court ordered the city authorities to disallow construction in and around the city lakes, as well as prevent conversion of land use. Over the decade that the case was heard, the judges hauled up state officials time and again for not implementing a time-bound action plan to prevent and remove encroachments, as well as setting up a sewerage system to collect and treat sewage to clean Udaipur’s lakes. The final judgement called for the setting up of a lake development authority, responsible for implementing the order and restoring the ecological integrity of the lakes, including Udaisagar. The state government drafted a bill in 2009, but the matter did not gain traction.

All of Udaipur’s 70 million litres of untreated sewage, along with the city’s filth, finds its way to the Ahar river which ultimately discharges into the Udaisagar lake. 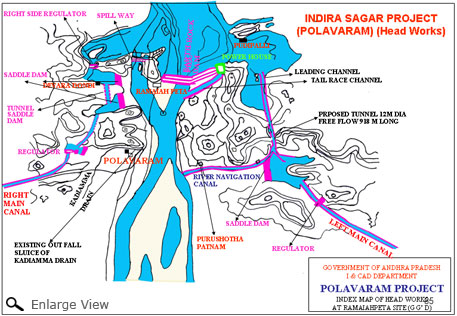 But despite the cesspool, developers saw an interest in the lake front, foreseeing a cleanup which would render the property priceless given the fact there would be no other construction around the lake. The island was bought from 18 sellers, consolidated, and then a part of it was converted for commercial use. The builder, known to be connected with the superintendent of police to ministers in Jaipur, got several administrative approvals from the Urban Improvement Trust (UIT), the city municipal corporation as well as a no objection certificate from the state pollution control board.

A Google search reveals little about the company. A website on the first search page confirms that it is a registered company operating within India and cites the Ministry of Corporate Affairs as the source of information. Nothing more; no address; personnel information; or contact details. The company neither seems to have a website, or at least none that appears on typing its registered name in a web search engine.

The high court has now fined the developer Rs 1crore, and has asked the city authorities to demolish the construction, while recovering the cost from the developer. The court has given a two month deadline. Vardha Enterprises is expected to approach the Supreme Court.

In 1997, the state government had declared a no construction zone around Pichhola and Fateh Sagar, the two lakes within the municipal confines and an important source of drinking water for the city. The order was not retrospective, but prevented any further construction within 200 metres of the high flood level. In 2000, the order was re-worded to allow “repair and plaster” based on approval from the city agencies, while construction in the catchment area was banned “except the rare exceptional case”. Submerged peta land (land cultivable in lean season) was to be identified and it was to be ensured that no activity other than agriculture is allowed.

But despite the court order of 2007, sewage was continuously discharged into the lakes and construction continued in several areas within the lake catchment areas. JSS filed a contempt petition in 2007. During the hearing of this petition, the case of Vardha Enterprise was subsumed as JSS members visited Udaisagar and learnt of the forceful conversion of peta land for a five star hotel. JSS submitted to the court that while many people had pending proposals for repair and plastering of their individual properties, UIT and municipal corporation gave permission to Vardha Enterprises to go ahead with its project to convert the island on Udaisagar into a five star hotel. “Besides, the island, although above the high flood level, is a part of the catchment and is an important part of the lake ecology, a breeding and nesting ground for birds, amphibians and reptiles,” says Tez Razdan, convener of JSS. The flouting of rules has been brazen, he adds. 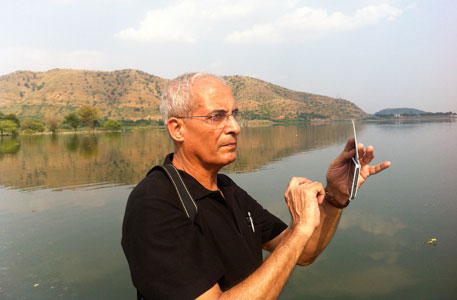 Vardha Enterprise, through an affidavit filed in the high court, claimed that construction activities were being undertaken after purchase of 8.15 ha and conversion of 16,300 sq metre for commercial purposes. This, they said, was in accordance with a state government circular in August 2010 that sought to promote hotels and tourism in and around Udaipur. UIT granted permission as did the state government. Vardha Enterprise also submitted that it had bought the land for 1.14 crore, invested 15 crore in the constructions and that due to the interim stay order passed in October last year, it was suffering losses to the tune of 2 lakh each day. The high court did not see much merit in these arguments. The court ordered an inquiry and found that a boundary wall of about two metres height had been raised illegally around the island, and using Google Earth imagery, the bench concluded that earlier there was no approach road, which had been built by “dumping boulders and soil with a view to connect the island with the main land”.

The developer falsely claimed that the project in question did not require statutory clearance as the built up area was less than 20,000 sq metres and that the Wetland Rules, 2010, which prohibits construction, did not apply as permission was accorded before the rules came into force. The courts, on perusal of the agreement, found that permission had been granted for 20,342 sq m. Nonetheless, the court ruled that since the project is within 200 metres of the high flood level, demarcated as the no-construction zone, the project is null and void. UIT officials are silent on the project. They are now saying that the court order is being complied with and that a sewage treatment plant is being constructed to prevent further pollution. “This only serves to prove that they granted illegal permissions for construction and have done precious little about either encroachment or pollution,” says Razdan.

Lula Ram and the others want their land back. Vegetables cultivated on one bigha earn them upwards of 25,000 rupees each year.