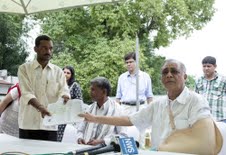 Union minister for tribal affairs V Kishore Chandra Deo has slammed the Madhya Pradesh government for denying forest rights to the Baiga tribal people of Singrauli district who would be affected by mining in Mahan coal block. Mahan reserve forest is known for its unique biodiversity; for the Baigas the 1,084 hectare mine block is a rich source of forest produce and livelihood.

The coal block situated in the Waidhan forest range in East Sidhi division was granted stage 2 forest clearance  by the Union Ministry of Environment and Forests in 2012, but with 36 conditions. One of the most important conditions for the coal block to get a final nod for mining is the implementation of settlement of rights under the Forest Rights Act of 2005. The coal block has been allotted to Mahan Coal Company, a joint venture of Essar Power and Hindalco. The coal mined from Mahan forest would be used to fire two thermal power plants (See Mahan at all costs)

During his tenure as environment minister, Union minister Jairam Ramesh, had opposed allocation of Mahan coal block to the private companies, fearing extensive damage to the environment of the area. His successor Jayanthi Natarajan had also initially opposed clearance, but was overruled by a group of ministers.

Deo called a press conference on Friday to express his anger over the way the tribal people in the region are being treated. He accused the coal mining companies of subverting democratic institutions such as gram panchayats, and said the so called villagers’ consent to mining of forest comprised of more than 11,000 forged signatures.

He said he had written to governor Ram Naresh Yadav and the chief minister of Madhya Pradesh Shivraj Singh Chouhan last June, asking them not to ignore the plight of the tribals residing in the region.

“There is not a single community forest right granted in the Singrauli district where a large number of forestland diversions for non-forest use are proposed. In spite of this, the state government and the local administration has turned a deaf ear to the pleas of the tribal and non-tribal communities living in the region and are using coercion and fraud to achieve its end,” the minister said in his letters. 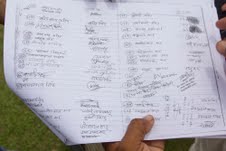 “There is a strong nexus between the company and the local authorities in the region which is leading to large scale violation of the forest rights,” the letters state.

The minister further stated that during a special gram sabha on FRA held on March 6, 2013 in Amelia village, a tehsildar, Vivek Gupta, along with police personnel made rounds of the village with the gram sabha (village council) register, forcing people to sign on the register. The minister said that this was done to garner support for a resolution approving diverting forestland to the mining project.

When the villagers complained to the district collector, he said he would conduct an enquiry but nothing came out it. Later, Lal and others, who are also a part of the Mahan Sangharsh Samity, a people’s front, filed a Right To Information application to get the copies of the resolution passed by the Gram Panchayat. “It was in these resolutions followed by the forged signature, we found that 11,074 signatures were forged,” added Lal.

According to Greenpeace policy officer, Priya Pillai, who is working closely with the forest dwellers and residents of over 60 villages in Mahan forests, said allowing mines in the region would open other coal blocks. “Chhatrasal, Amelia North and several other blocks in the Mahan forests are awaiting approvals, which will further fragment the entire forests in the region,” said Pillai.