Halophytes - plants growing on saline soil - could be India's Answer to the problems of salt desert and wasteland reclamation, besides Being an economic boon 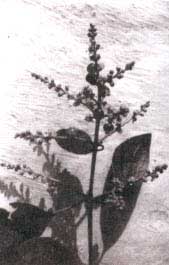 FROM the state of Gujarat comes one of the more recent examples of innovation in desert reclamation. A private industrial house (the Benzer group) has successfully reclaimed a large chunk of saline wasteland in Bhachau district of Kutch using halophytes, flora which grow in saline habitats.

,The word 'Indian desert' usually conjures up the much publicised image of the Thar in Rajasthan. However, large areas of Kutch and Saurashtra in the neighbouring state of Gujarat harbour equally and zones, like the Great and the Little Rann of Kutch (rann in Gujarati means a desert). These diverse, xeric environs with varying degrees of salinity and soil structure have given rise to a multitude of halophytic plants. Systematic cultivation of halophytes can not only help green wastelands to a great extent, but also provide us with food, fuel, fodder, fibre, resins, essential oils and medicines.

The Benzer group has used the Salvadom species (locally known as pilu) for its reclamation exercise. Salvadom can grow in highly saline wasteland as well as along the coast. After the seedlings are two years old, the plant can be irrigated with eight-nine degrees of saline water.

In terms of halophytic vegetation, Kutch and Saurashtra together harbour greater biodiversity than Rajasthan. Only a single species of a halophyte, the Suaeda fruticosa, has been reported from Rajasthan, whereas three species of the Suaeda -the Sfruticosa, S nudiflora and S maritima - are found in Saurashtra and Kutch. These arc locally called Iuno and morus and are used as food, fodder and medicine.

In Gujarat, large areas suffer from soil salinity and salt infiltration into groundwater aquifers. While prime agricultural lands are being overexploi ted, large areas of saline wastelands and coastal belts remain unutilised. Under these circumstances, instead of using costly remedial measures to reclaim these wastelands, the local halophytic species which can grow in moderate to highly saline soils can be cultivated.

While the seeds of Sadvadora oleodies (mitho pilu) are eaten by humans, birds and livestock, S persica (kharo pilu) holds greater commercial value; its seeds contain 30-40 per cent nonedible oil which is used in soaps and detergent, its leaves are eaten by camels and its root bark has medicinal value. Urochondra sendosa arid Juncus maritim us can be used as sources of fibre and paper Pulp respectively. The Suaeda maritinur can be used for fixing seashore sand dunes. A creeper, the Citrullus colocynthis (Indravarna), which grows com- monly along the sandy coastline of Gujarat, can be cultivated for its fruits which contain colocynth, a drug used as a cathartic.

Unfortunately, no comprehensive survey of the halophytic vegetation of Gujarat has been done. A few isolated studies of the coastal halopbytic flora were conducted in the '60s. According to a floristic survey conducred by the botany department of M S University, Baroda, in eastern and western Kutch in 1986, 12 plant species were listed as being endangered. However, the study failed to include the eco- logical and ethnobotanical aspects. Since then, the and habitats of Gujarat along with their vegetation have undergone considerable change and with the current wave of inclustrialisation sweeping over the state, these species are under threat.

The economic and environmental potential of a large number of our indigenous halophytic species remain undiscovered and untapped. While the government is squandering money on importing expensive desalination technologies from the Netherlands and Israel, the most feasible solution probably exists in our backyards.