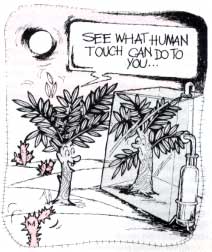 SAND dunes extending till the land meets the sky. That is what we expect a desert scene to be like, right? Wrong. Give geneticists and plant biologists some more time and they promise to make the deserts green. Researchers in Japan have found ways to help plants beat the desert heat. This, they say, can be done by neutralising the active oxygen species (such as hydrogen peroxide) that kill off plant cells. The researchers hope that their technique will make it easier to grow food and fruit in the arid desert plains.

In strong sunlight, plants close their stomata to prevent water from evaporating. But this also slows down photosynthesis, since less carbon dioxide gets into its leaves. And cells die because the energy that would have been used in photosynthesis is used to create active oxygen. Scientists at the Research Institute for Innovative Technology of the Earth (RITE) and the agricultural department at Kinki University in Osaka, Japan, have found a way to dissolve this active oxygen. They injected an enzyme-producing gene from bacteria which live in the human colon into the chloroplast of a tobacco plant. The enzyme, called catalase, turns the active oxygen into water. The researchers tested their altered plant by putting it side-by-side with an unaltered plant under light from six 450-watt sodium lamps. The result? While the altered plant survived, the other one withered within two days. Although tobacco is not an appropriate plant for greening deserts, it was easy to work on since the plant has been widely studied and genetically manipulated, says chief researcher Ken'ichi Tomizawa.

"We have been using tobacco just for the basic research. In the next step, we need to think about which plant would be best suited for field experiments," Tomizawa says local standards of living will dictate the type of plants they will use. "Developing countries need food plants, but countries like Israel need other types of plants, such as fruits or cash crops," he said.