They claim their proposals on the new climate agreement in the works are not reflected in the revised text, tilted heavily in favour of rich nations 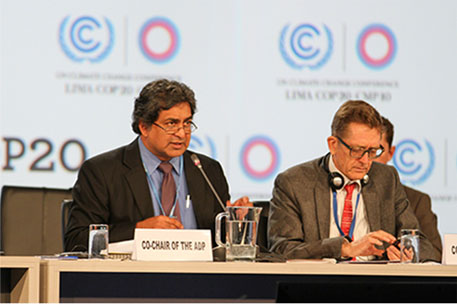 Two new documents released by co-chairs of the Ad-hoc Working Group on the Durban Platform for Enhanced Action (ADP),  Kishan Kumar Singh and Artur Runge-Metzer, at the ongoing climate talks in Lima left developing countries fuming. The co-chairs insisted that these documents—a draft text on elements of new climate agreement scheduled to be signed in Paris next year and a “non-paper text on elements for a draft negotiating text—are based on Parties’ proposals. But they currently have no legal status and would be the basis for detailed textual negotiations. Developing countries held that the documents were unfair and incomprehensive. (Parties have a mandate to finalise the draft text at the ongoing Lima summit.)

With regard to the draft text, countries, including Bolivia, China, India, Venezuela, Equador, Saudi Arabia and Egypt, expressed disappointment over the fact that it was a “clear text” with no space for divergent views that have characterised climate negotiations over the past one week. They said the text is clearly biased in favour of the rich countries’ perspectives and that the developing countries proposals were not reflected properly in the text. For example, the draft text speaks of economy-wide emissions for developed countries but that all Parties should move towards this goal over time. Clearly, developing countries have never endorsed this view and have always stressed on differentiation between countries over effort-sharing for climate mitigation action.

Parties also demanded to know the criteria on the basis of which some proposals found mention in the text while some others were conveniently sidelined. Issues which are held pivotal to the developing countries, like financing climate change mitigation actions, technology transfer, adaptation, capacity building and means of implementation, did not find the required space in the draft text. Bolivia expressed surprised that the new carbon budget approach, a highlight of the latest IPCC report, has also failed to get attention in the text content. Countries like Norway, though, expressed satisfaction and congratulated the co-chairs for their “hard work”.

On the same lines, the other document, the “non-paper”, also did not find favour with the developing countries. Three sections were discussed on Monday in the negotiations. While Section A dealt with the “Preamble”, Section B and Section C were titled “Definitions” and “General” respectively. Again, there was a stark divide between developed and developing countries over the language of the text. Mention of “evolving responsibilities” in the text drew sharp criticism from countries like China, Brazil, Saudi Arabia, Jordan and Argentina while developed countries, including Switzerland, the EU bloc, the US and Japan, welcomed it. Brazil put forth the proposal of “adequacy, responsibility and development” in the preamble of the text. Developed countries focused on intensive mitigation ambition for cutting greenhouse gases while developing countries advocated a more balanced approach involving other elements like adaptation, finance, technology transfer, capacity building and that these should also be included in the actions countries would take towards curbing climate change. Developed countries like Switzerland proposed that all countries should aim for “economy-wide reduction targets” as this would amount to big ambitions and preserve “environmental integrity”.

On a general note, developing countries are clear about sticking to the original principles of the UN Framework Convention on Climate Change while developed countries are flexible and support new language terms like “evolving responsibility”, “dynamic differentiation” and “dilution of differentiation” to signify the current emission trends, a proposal vehemently opposed by the developing countries which focus more on historical responsibility of rich nations and development needs of the poor.