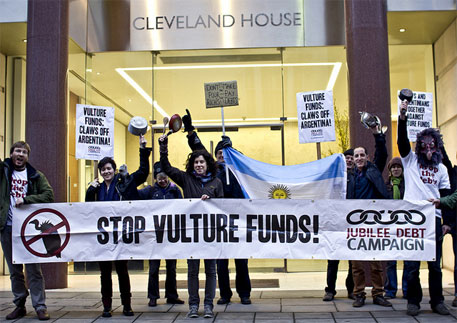 Over 130 developing countries have urged the United Nations to create a legal and regulatory framework to stop vulture funds from undermining sovereign debt restructuring deals as happened in the case of Argentina. The proposal is likely to be voted on at the UN general assembly next week. Argentina's case has become a major concern for developing countries after it lost a legal battle in the US courts against financial speculators who had purchased the country's debt at very low prices when the country was in severe financial crisis in 2001-2002. The speculators then rejected the terms of debt restructuring and got the backing of US courts to recover the hedge funds with interest. On June 16, this year, the US Supreme Court rejected Argentina's appeal against a lower New York Court decision that had ordered the Latin American country to pay suing hedge funds of $ 1.33 billion (principal plus interest) for holdout bonds.

Another order of the US Supreme Court ordered certain financial institutions of the US to disclose information to these hedge funds about assets that Argentina holds worldwide, including accounts held by entities of the government of and by individual officials. The US court decision has driven the country into its second debt default in 13 years.

If the developing countries, G-77 plus China, succeed in pushing through their proposal to create a multilateral convention, it could prove to be a major step in dealing with sovereign debt crisis and send out a signal that lenders will not get bailed out, says a news release by Jubilee Debt Campaign, which is part of a global movement demanding a new and fair financial system that puts people first.

Sarah-Jayne Clifton, director of Jubilee Debt Campaign, has been quoted by The Guardian, saying, “Countries across the world would benefit from the existence of a fair, independent and transparent way to arbitrate on debts when governments cannot afford to pay.”

It is however doubtful if the UK and US would allow such a proposal of developing countries to be passed. the UK joined France, Australia and Japan last month in blocking a UN group of experts from proposing the creation of a debt arbitration mechanism as part of the policies needed to meet new Sustainable Development Goals, which will be replacing the Millennium Development Goals next year, the Jubilee Debt Campaign news release.