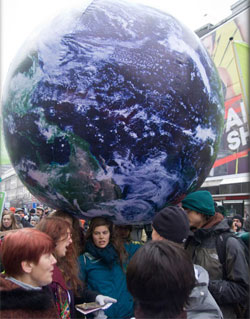 Ahead of the UN’s Secretary-General Ban Ki-moon’s Climate Summit in New York on September 23, the world’s six multilateral development banks have reaffirmed their commitment to reinforce and further develop climate financing.

“As the EU bank we share the commitment of other multilateral development banks to enabling climate related investment in developing countries and continually seek to share experience from across all our areas of operation,” said Jonathan Taylor, European Investment Bank Vice President responsible for climate action.

Since 2011, the multilateral development banks have released nearly US $75 billion in financing to help developing countries and emerging economies mitigate and adapt to climate change impacts.

“By seizing opportunities for investment and attracting finance at scale for low-carbon and resilient development, we encourage others to join us in catalysing the necessary increase in climate finance,” reads the statement. The reaffirmation of the multilateral development banks is expected to enable greater cooperation and shared experience between the banks and other financial bodies involved in climate action.

Country heads and industry leaders who will participate in the summit are expected to deliver “bold pledges” on how they intend to tackle climate change and commit to pushing ahead with plans to establish a robust price on CO2.

Industry braces for carbon price rollout
Ahead of Ban Ki-moon’s Climate Summit, Carbon Disclosure Project (CDP) has released a report that says at least 150 major companies worldwide—including ExxonMobil, Google, Microsoft and 26 others in the US—are already making business plans for a robust international carbon market, assuming they will be taxed on their carbon pollution.

CDP is a non-profit that asks the world’s big firms to disclose their carbon dioxide emissions and reveal how they are dealing with climate risks.

The report shows that businesses are ready for legislation on carbon pricing, and, in some cases, are way ahead of governments in planning for climate change risks and opportunities. For instance, 29 major publicly listed companies in the US already incorporate an internal price on carbon into their business strategies despite a lack of legislation in the country. Nearly 30 companies in the UK told CDP that they used an internal carbon price, including the National Grid, which values carbon at £55 per tonne—significantly higher than the £18 per tonne carbon floor price set by the UK government for 2016. More than 200 companies said they are already working with governments to help roll out cap and trade or carbon taxes.