Devil is in the details

A WTO meeting of ministers is hailed as a success 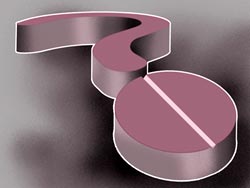 an informal round of World Trade Organisation (wto) talks was held in Sydney, Australia on November 14 and 15, 2002. A select group of 25 countries including Brazil, China, India, Senegal, the eu and the us attended the talks. The issue of developing countries' access to inexpensive medicines, enabling them to tackle public health problems, pushed aside every other item on the agenda. At the meeting trade ministers agreed that poor countries, which didn't have the capacity to manufacture expensive drugs, had the right to import generic drugs. (Generic drugs are copies of branded ones whose patent has expired; they are cheaper and hence more accessible.)

But important details were left unresolved. Which diseases qualified as 'public health problems -- malaria, tuberculosis and hiv/aids? What about diseases such as cancer and diabetes? Which countries could import drugs and which could export them? What assurance was there that cheaper drugs meant for poor countries will not end up in wealthy markets? Who would monitor this phenomenon? "The fact that countries have shown willingness to negotiate is a very good sign. But this was a mini-ministerial meeting and not an official ministerial meeting. Nothing has been formalised yet," said T S Vishwanath, of the Confederation of Indian Industry.

The agenda of the meeting was to accelerate implementation of decisions arrived at during the last round of trade talks, held in 2001 at Doha. It was agreed at Doha that countries could go for compulsory licensing (whereby governments issue a licence to a company to manufacture generic versions of patented medicines in the interest of public health).

But what if a country did not have manufacturing capacity? A conflicting provision (article 31 f) under wto's agreement on trade-related aspects of intellectual property rights (trips) rules that manufacturing generic copies under compulsory licensing should be predominantly for the domestic market. The provision prevents exports to other countries. In effect, countries without manufacturing capacity have no alternative but to import medicines at great cost. Most developing countries do not have such a capacity, apart from India, China, Brazil and Argentina.

Doha set 2002-end as the deadline to resolve this problem. This led to the issue hotly debated in Australia: could countries without any significant manufacturing capacity be allowed to import generic drugs from other countries? Such a solution was potentially available, also under wto rules. As James Love of the us-based research organisation Consumer Project on Technology points out, a provision already exists under trips to allow such imports and exports. The provision (article 31 k) allows countries to override patents to remedy a practice considered to be anti-competitive.

The agreement reached in Australia was hailed as a success. But none of the contentious issues have been resolved.

After the Sydney meeting ended, the trips council held a meeting of its own on November 18-19, 2002. There, Ambassador Eduardo Perez Motta of Mexico, chairperson, trips council, tabled a proposal for negotiation on the second day of the council's meeting. The proposal listed hiv/aids, tuberculosis, malaria and other epidemics as public health problems. It further said that besides drugs, import of diagnostic kits should also be allowed, as demanded by the Africa group in particular.

The compulsory licence issued would be subject to conditions. The amount of medicine a country produced would be strictly limited to that required by the importing country. Products had to be clearly identified and importing countries would have to notify the wto. Some suggested that the notification rules could prove to be burdensome especially for the small countries of the world.

The proposal also suggested certain safeguards like packaging and labelling aimed at preventing the diversion of drugs into markets in industrialised countries. A final decision on this would hopefully be taken at the general council meeting of the wto before the end of this year.