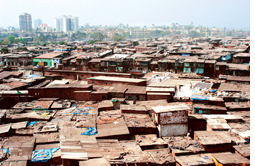 the stage is set for protests against the Dharavi Redevelopment Project (drp), which envisages transforming Dharavi into an integrated township without people's consent. On June 18, residents will march to the Maharashtra Housing and Area Development Authority's office to voice their protests. Raju Korde, president of Dharavi Bachao Committee is firm: "We will not take things lying down."

On June 1, the Maharashtra government issued an advertisement inviting expression of interest (eoi) for the Rs 9,300-crore drp-- published in newspapers of over 20 countries. The figures: Rs 1 lakh for an eoi form; a minimum opening bid of Rs 1,000 crore; 57,000 families to be rehabilitated; and over Rs 4,000 crore to be made. And in the forthcoming seven years, five select developers will convert Dharavi into a "posh locality" with five self-sufficient sectors, each with basic amenities.

Announcing the beginning of bidding process, I S Chahal, officer on special duty, drp, said eoi forms will be available through June and developers would need to submit them by July-end. eois will then be scrutinised by a committee headed by the chief secretary. Five successful bidders will be declared by September 1. To pre-qualify, bidders must have completed at least one 40-hectare township with a minimum built-up area of 7 million square feet (sq ft); have a gross net worth that's 30 per cent of the project cost for one sector (about Rs 1,800 crore) and have an average annual turnover for the past three years, which is at least 25 per cent of the sector's project cost. For every 100 sq ft used to rehabilitate slum dwellers, the developer can sell another 133 sq ft in the free market.

drp was conceptualised in the late 1990s but could never get underway due to various problems (see 'Simmering', November 30, 2004). Maharashtra claims to have fine-tuned drp by scaling down the project area from 213 ha to 144 ha, constructing five new roads, increasing land reserved for parks, gardens, schools and hospitals. But people are not pleased.

"The initial mandatory 70 per cent consent of Dharavi residents was cut down to 60 per cent in 2004. When the government failed to gather even 60 per cent support, it altogether dropped the consent clause last year," says Korde. "Our suggestions to the chief minister and bodies concerned have been ignored," alleges Sheela Patel, director of Mumbai-based Society for the Promotion of Area Resource Centers. Besides, there are also questions being raised on the 'eligibility' criteria for the selection of 57,000 families for rehabilitation.