WHO agency says there is compelling evidence to classify diesel fumes as deadly carcinogen along with tobacco, asbestos 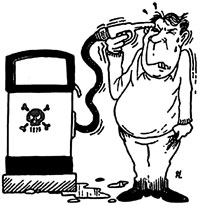 The International Agency for Research on Cancer (IARC), a part of the World Health Organization, gives its scientific verdict that diesel engine exhaust can cause lung cancer in humans. In its report released on June 12, IARC has reclassified diesel exhaust from its group 2A list of probable carcinogens to its group 1 list of substances that have definite links to cancer. IARC-WHO has now changed the status of diesel exhaust from “probable carcinogen” to “carcinogen”.

This means now diesel exhaust belongs to the same class of deadly carcinogens as asbestos, arsenic and tobacco among others. The decision on reclassification of diesel exhaust emerged from a rigorous review of the latest scientific evidence on the cancer-causing potential of diesel and petrol exhausts. In its release, IARC-WHO has said that this decision is unanimous and is based on compelling scientific evidence. The health agency has urged for worldwide efforts to reduce exposure to diesel fumes as much as possible.

Evidence on diesel's toxicity has been mounting over the past 20 years, which has compelled stringent regulatory action on diesel quality and emissions standards in different regions of the world. Although diesel exhaust was defined by IARC as probable carcinogen to humans and was put in group 2A in 1989, its advisory group has been repeatedly calling for a re-evaluation since 1998.

The most clinching evidence came recently from one of the largest US study that was published in March this year by the US National Cancer Institute. This study has analysed 12,300 miners for several decades, starting from1947. Researchers found that miners heavily exposed to diesel exhaust had a higher risk of dying of lung cancer.

This is certainly a wake up call to India which is in the grip of rapid dieselization. While immediate measures are needed to reduce diesel consumption, urgent steps will have to be taken simultaneously to clean up diesel.

The rise in number of diesel vehicles is very disturbing because deadly facts about diesel toxicity and evidence of the acute cancer-causing potential of diesel pollutants are now pouring in from around the world. In India, rigorous emissions inventories have not been prepared to understand the impact of increasing diesel use on ambient air. A collage of small pieces of evidence, however, bears out its impact on air quality.

A World Bank-supported study on source apportionment of PM2.5 (particulate matter less than 2.5 micron in size) in selected Indian cities, released in 2004, shows that, depending on the season, the contribution of diesel fuel to the total PM2.5 ambient concentration can be as high as 61 per cent in Kolkata, 23 per cent in Delhi and 25 per cent in Mumbai. The fine particulates have serious health consequences as per the health studies conducted in other countries. There are additional health impacts of diesel-related pollutants in Indian cities. These are caused by both particulate matter and nitrogen oxides.

When the Indian auto industry makes claims of modern diesel engines, it omits to say that health concerns have driven governments in Europe and the US to leapfrog to clean diesel. Diesel is considered relatively cleaner when advanced emissions control systems are used with diesel fuel with 10 ppm sulphur content. But in India, diesel sulphur level is as high as 350 ppm. Only a few cities have 50 ppm sulphur diesel – five times higher than the global best. The diesel vehicle technology in India is more than 10 years behind Europe.  By the end of the 12th plan, the so called modern diesel technology will be 17 years behind Europe.

People are exposed to not only to motor vehicle exhausts but also to exhausts from other diesel engines. But diesel cars pose a special concern as they release emissions within the breathing zone of people. In a city like Delhi more than 55 per cent of its 17 million people live within 500 metre of major roads and are directly affected by traffic emissions.

The new report sends a strong signal that public health action warrants urgent and stringent action. In India, dieselization of the car segment has taken off at a maniacal pace with state subsidies. Despite recession, diesel cars have clocked 34 per cent growth last year. But the cost of supporting their profits, though crippling and killing, is being generously borne by the government and oil marketing companies. Public health costs do not even figure in diesel’s balance sheet. This must stop. Cancer cannot be traded for profit.