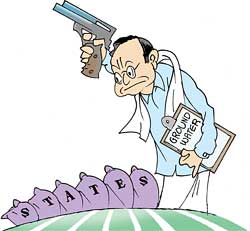 A Rs 1,800 crore national programme for artificial recharge of groundwater through dug-wells was announced by finance minister P Chidambaram, in February 2007. It was to provide proper irrigation facilities to millions of farmers. But thanks to the delays on part of the state governments, the scheme is yet to take off.

With about 80 per cent of the groundwater stressed areas concentrated in Rajasthan, Andhra Pradesh, Madhya Pradesh, Maharashtra, Karnataka, Gujarat and Tamil Nadu, the scheme envisages recharging 4.45 million irrigation dug-wells in these seven states.

But due to inaction by respective state governments, Rs 1,537 crore sanctioned under the scheme is still lying unused. The money has also been transferred to national bank for agricultural and rural development (nabard) for disbursement by the ministry of finance.D Elangovan, general manager, nabard, says, "As soon as the states submit their list of beneficiaries to ministry of water resources (mowr), this amount will be released to the farmers."

The scheme offers a 100 per cent subsidy to small farmers with 1-2 hectares (ha) of land and to marginal farmers (upto 1 ha). Other farmers get 50 per cent subsidy. The amount for the construction of the recharge structure is to be deposited in the savings bank accounts of the farmers. But as Elangovan points out, only about 70 per cent of farmers in the country have bank accounts. State governments must, therefore, find a way to reach the money to farmers who don't have a bank account.


Going by the guidelines circulated by mowr, the entire subsidy amount was to be released to the farmers by March 31 and installation of structures was to be completed by June this year. All these deadlines have already been missed.

In fact, none of the states could even come up with concrete proposals on the scheme at the May 16, meeting convened by the joint secretary, mowr. While Maharashtra and Gujarat proposed to submit their lists of beneficiaries by the end of July, Andhra Pradesh, Tamil Nadu, Madhya Pradesh and Rajasthan plan to finalize the details by September.

According to minor irrigation census report (2000-01), there are a total of 9.39 million irrigation dug-wells in the country which are owned by small and marginal farmers. Of this, 6.4 million fall in states where the scheme is to be implemented. There is no limit on the number of dug-wells to be recharged per farmer, Elangovan points out.

Going by the initial estimates, Tamil Nadu, with highest number of dug-wells at 1.2 million, will receive 29 per cent of the cost where as Andhra Pradesh will get 20 per cent. As for other states, Rajasthan with 1.07 million dug-wells has been allotted 19 per cent of the total funds (see graph Who gets how much).

According to Elangovan, the total cost of implementation of the scheme comes to Rs 1871.10 crore whereas only Rs 1,800 crore has been sanctioned for the scheme. "The difference will be borne by other farmers who get only a 50 per cent subsidy," says he.


Many well conceived government schemes have failed to deliver for lack of post-implemention monitoring. A Gurunathan, chief executive of Dhan Foundation, an ngo working in the area, believes there is a desperate need to involve local bodies in order to secure the future of the schemes. "Grassroots organizations should be involved in the monitoring process, making sure they gain exposure to well recharge programmes already existing in different parts of the country, like Gujarat and Tamil Nadu," says he.

Experts feel, though putting the farmers, the panchayat and ngos at the helm of implementation of recharge structures might be a good idea, the institutional structure proposed to plan (including identification of beneficiaries) and monitor the scheme is too bureaucratic. What needs to be seen is whether the subsidies will be rightly targeted or not.