Discussions on HFCs at Montreal Protocol: one step forward, two steps back 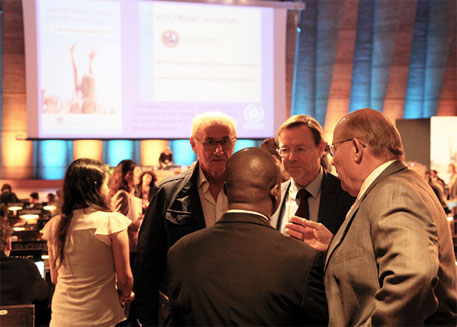 There was little progress on discussions on hydrofluorocarbons (HFCs) at the 26th Meeting of Parties (MOP) to the Montreal Protocol under way in Paris. Some countries continue to stall discussions on the group of gases used as substitutes to ozone depleting gases in refrigerators and air-conditioners. They insist that since the gases have high global warming potential they should be discussed under UN Convention on Climate Change and not Montreal Protocol that deals with ozone depleting substances.

The plenary had decided to set up an “informal group” (as opposed to a formal “contact group”, the proceedings of which are recorded) to discuss HFCs. This small achievement was, however, negated by the fact that there was no fruitful debate on HFCs even in this informal group. Parties discussed what should and should not be discussed and then ultimately went in and did not discuss any of it.

Key states such as the United States, Kuwait, Saudi Arabia and India made statements that added nothing new to help progress in discussions. After a logjam on discussions on what to discuss and a potential way ahead for phasing out HFCs, St Lucia suggested that Parties must at least go ahead and form a contact group that would only discuss contact group formation.

After much word-jugglery, the plenary managed to agree on the following text for convening informal discussions: mechanisms for ensuring a sustainable phase-out of HCFCs in Article 5 parties, as well as all issues in relation to HFCs management for all Parties; and how to address HFCs management in 2015.

It was also agreed that two facilitators will report on the outcome of the discussions in the plenary.
Informal discussions took place in the evening. After an initial awkward silence and passing of the buck by countries to open the dialogue- EU kicked off the discussion by starting to address some points of concerns.

India made two interventions: one stating that instead of two proposed chairs for the informal group there was only one chair from a developed nation and that such a move was not a considered equal representation.

Parties kept on hitting the same discordant notes and accused each other of not addressing their concerns. The resultant text was non-committal about ways to address HFCs and the way forward.