The Union government goes for another field trial of Bt cotton, and another round of confusion 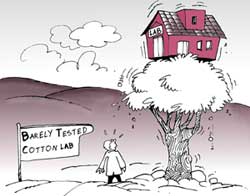 PRABHANJAN VERMA
It is a battle half-won by both the warring parties. The government has decided to go for another round of field trial of the controversial genetically modified (gm) cotton, known as Bt cotton before deciding in favour of its commercialisation. The commercialisation is being pursued by the Maharashtra Hybrid Seeds Company Ltd (mahyco). The company is partially owned by biotech giant Monsanto.

The decision comes as a respite for both the pro-and anti- gm crops lobbies. This is India's first application of license for commercial gm crops. For the government, which was speculated to have almost decided in its favour, it is a 'politically correct' decision in face of growing pressures from environmentalists and activists opposing the gm crops.For the anti-gm groups however it is a decision that stamps their apprehensions on the scientific validity of the company's field trials of the gm cotton.

On June 19 2001 the Genetic Engineering Approval Committee (geac) the nodal committee that gives license for gm crops in India decided for extension of the field trial. "(Earlier) trials could not be conducted in time and dates of planting were late in some cases by as much as three months. It was therefore felt that the trials (must) be repeated on a large-scale and such trials should be done under direct supervision of the Indian Council of Agricultural Research (icar)," read its official statement. Interestingly it was for the first time that the icar has been involved in the gm cotton trial. Till now, the government was under criticism for not involving the icar. The decision came after a long close-door meeting of the geac that has also recommended further research on the impact of gm organisms on human food, animal feed and soil fertility (see The next cotton trial).

"Some members were not convinced with the test results of the previous trials. So we did not want to take a chance," says A M Gokhle, chairperson of the geac. Anti-gm crops groups have welcomed the decision albeit with apprehensions. Suman Sahai, convenor of Delhi-based non-governmental organisation Gene Campaign, says, "To defer the approval is a good decision." However, the industry has strongly criticised the decision. Sandhya Tewari, deputy director (biotechnology) at the Confederation of Indian Industry (cii) says, " It's a very unfortunate decision." For her the decision is a 'classic example of bureaucratic delay'.

In a surprising change in strategy just before the crucial meeting, geac called for an open dialogue with anti-gm crop activists, members from non-governmental organisations (ngos), farmers, representatives of the government and mahyco. Michelle Chawla of Greenpeace, which has been running an international campaign against gm crops, said, "We appreciate the holding of the open dialogue session, but are shocked to see the government's eagerness to introduce Bt cotton." This turnaround was a result of hectic lobbying by ngos and activists against the way mahyco conducted its trials and tests to apply for the license.

Controversy has trailed mahyco since its formation, and Bt cotton has become the symbol for the movement against gmos in India. ngos and activists have been opposing gm crops for its environmental effects and legal uncertainties. The ngos were averse to the proposal on the grounds that proper tests had not been conducted for its environmental impacts, health hazards and other fallouts. Moreover, insufficient data was available to assess its impact on Indian agriculture. The only scientific information available to the government authorities came from a study by mahyco-Monsanto. For over a year now, activists have been questioning the scientific soundness of the biosafety studies on Bt cotton conducted by mahyco-Monsanto in India. At the 'open dialogue', activists attacked the government for its lack of transparency in the decision-making process. What gives credibility to this allegation is the fact that the complete data of the company's field trials -- conducted over four years -- have not been made public. Before the study could be commissioned, India gave permission for large-scale field trials of Bt cotton. According to Vandana Shiva, director, Research Foundation for Science Technology and Ecology, "Since the outcome of this manipulation cannot be predicted as completely as that of conventional breeding, there is tremendous uncertainty associated with gm crops both in terms of environmental impacts and food safety."

Though the government has not yet formed a committee to monitor the fresh field trails, it has stated that it will comprise representatives from government agencies only. Activists are unhappy with this. Says Sahai: "The committee constituted to supervise the trials does not include any independent experts or ngo activists. I think the composition of the committee should be changed to include independent agencies to ensure complete transparency." The committee will comprise of representatives from the Union ministries of environment and forests, biotechnology, agriculture and health. Groups opposing Bt cotton fear that as the company has got access to government departments, there is a likelihood of field trial results getting fudged. Devinder Sharma, an agricultural scientist and campaigner against gm crops, alleges: "The whole exercise is a scientific fraud. There is a big lobbying out there." Judging by the reactions of government officials, it seems that neither ngos nor activists will be involved in the trials at any point of time. "Calling them ( ngos and activists) for an open dialogue doesn't mean that they can influence our decision. We firmly believe in our pro-gm stand," says a senior official of the department of science and technology (dbt), who is also a key player in the decision-making process of the geac.