How biodiversity helps clean pollutants in water and soil 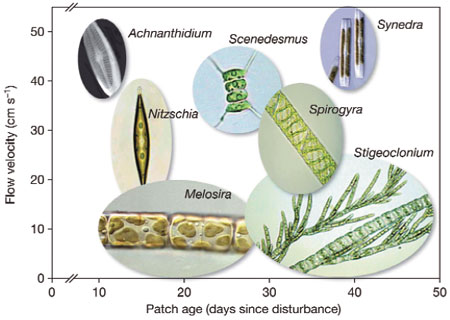 ELEMENTS like nitrogen and phosphorous are required in small quantities by both plants and animals. With increasing agriculture the levels of these fertilisers being released into water bodies has increased. This has led to pollution and depletion of oxygen in water bodies due to excessive growth of some plants. This changes river biodiversity and distribution of species.

Nutrient over-enrichment is a significant problem for countries with coasts. Removing excessive nutrients would cost enormously; US $44 billion for nitrogen alone, according to an estimate by the Envir­onment Protection Agency in the US in 2009.

Now a study by Bradley Cardinale, professor at the University of Michigan, published in the April 7 issue of Nature claims to have solved the mystery. Cardinale found that streams with a high biodiversity of algae were 4.5 times more efficient at removing nitrate—a comm­on pollutant found in fertilisers and sewage—than streams with a single alga species. This is because each alga species occupies a different “mini-habitat”, or niche, in the stream, for example fast-flowing water or calm pools. As biodiversity increases, each niche is fill­ed by a different species, biomass incr­eases, and the stream is cleaned more.

When these mini-habitats were removed, the nitrogen uptake was reduced despite having the same number of algal species, he adds. After some time only one species dominated the habitat.

Cardinale set up 150 miniature model streams and simulated environments found in real strea­ms. To each stream, he added, one to eight species including diat­oms and green algae. An interesting feature was creation of different flow ve­locities at different timings so that by the end of the experiment the niches had varied ages ranging from five to 50 days. He then added nitrate to the systems and measured how quickly it was removed. On average, the streams with eight species of algae removed the nitrate 4.5 times faster than those with one. It was also observed that high-velo­city regions were dominated by single-celled diatoms of algae while low-velocity regions had more of large, filamentous species. The study was published in April 7 issue of Nature.

“This is the first study that shows how biodiversity promotes water quality,” says Cardinale. He warns that loss of biodiversity through species extinction could be compromising the ability of the planet to clean up. Assessing the merits of the work, T G Japtap, a scientist at the National Institute of Ocean­ography, Goa, said, “it will help in sequestration of excessive nutrients to maintain or rehabilitate the quality of aquatic environment.”