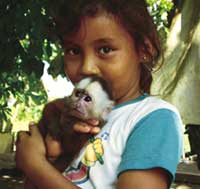 A team of researchers and filmmakers will travel through the Colombian Caribbean from January 2007 to produce documentaries about endangered species and ecosystems. This television project includes the participation of the private channel rcn and Eco Films, Colombia. The team will spend a year in the area collecting material for the documentaries.

Luis Gutirrez de Pieres, executive director of Eco Films, said that during the research they will produce four mass media campaigns to encourage conservation schemes and to halt trafficking, possession and marketing of wild species.