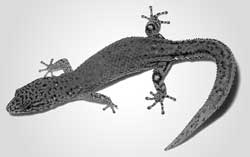 A 16-millimetre lizard, Jaragua Sphaero or dwarf gecko--the world's smallest vertebrate-- has been discovered on Beata Island, off the southern coast of Hispaniola, the island shared by the Dominican Republic and Haiti. The lizard is also the smallest of the Earth's 23,000 species of reptiles, birds and mammals, according to a paper in the Caribbean Journal of Science.

The lizard exists only on Beata Island and nearby areas in the Republic's Jaragua National Park. It was discovered by Pennsylvania State University evolutionary biologist Blair Hedges and University of Puerto Rico biologist Richard Thomas.

However, it is feared that the lizard's habitat is vanishing fast. "In the Caribbean, forests that used to cover all of the land now typically cover less than five per cent - and they are being cut down at an increasing rate, mainly for subsistence farming and fuel," warned Hedges, adding, "people are cutting down trees even within the national parks and if they take the forest away, these lizards and other species will disappear."