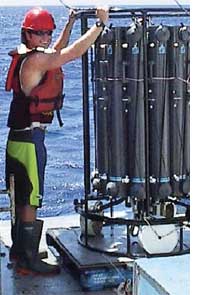 amongst the chemicals that poison fish, methyl mercury is one. An environmental pollutant, it makes its way into the ocean where it enters the food chain and is consumed by fish which are eaten by humans. In the US, 40 per cent of all human exposure to mercury is from tuna harvested in the Pacific Ocean, the northern part of which was the study area for a research team from the Unites States Geological Survey.

Methyl mercury is an organic, and also the most toxic, form of mercury. Once in humans it can readily enter the brain via blood and even pass through the placenta, endangering the health of a developing foetus. Methyl mercury was known to enter freshwater ecosystems through direct discharge of industrial effluents. But its entry into the oceans was not clear.

The researchers found that total mercury levels in the North Pacific Ocean waters rose 30 per cent in the last 20 years. To explain the find, the team quantified total methyl mercury in samples taken from 16 stations around the eastern North Pacific Ocean, along with various water samples upto a depth of 1,000 metres into the ocean.

They found that mercury emitted from thermal power plants settled in the ocean to a depth of 200-700 metres. At this depth, naturally occurring bacteria decompose organic matter. When algae that are found in the upper reaches of the ocean die, they fall to greater depths and start settling down. Methyl mercury is formed when bacteria decompose these dead algae in the presence of mercury. This organic debris is eaten by small fish. Higher up in the food chain, these fish are, in turn, consumed by predators like tuna.

"The study traces the recent mercury enrichment of the sampled Pacific Ocean waters to emissions originating from a fallout near the Asian coasts. These waters then enter a long-range eastward transport by large ocean circulation currents," said David Krabbenhoft, a US Geological Survey scientist and co-author of the study.

If mercury emissions continue at this rate, there will be an additional 50 per cent increase in the Pacific by 2050, predicts the study published in the May 1 issue of Global Biochemical Cycles.