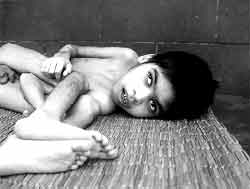 After Kerala, it is now the turn of neighbouring Karnataka as the clouds of endosulphan continue to blow -- spreading disease and hazarding the lives of many more even as the insecticide industry has stepped up its counter campaign reiterating that the chemical is "a safe pesticide". While scientific community in the two states, rudely shaken out of its certitude, is now resorting to double-speak, the political leadership in both has been persuaded to order at least a partial, temporary ban on aerial spraying of the dreaded insecticide on cashew after several cases of deformity were brought to light.

Nevertheless, the contours of the tragedy are unfolding further as villages in Karnataka begin the ordeal of marshalling experiential evidence of health damages caused by endosulphan, a pesticide that left much toxic residue on agriculture in the country when it began its scourge in Kerala's Kasaragod district. Exposure to the insecticide, banned in many countries, has been linked to several unusual diseases particularly among children since the state-owned Plantation Corporation of Kerala (PCK) undertook aerial spraying of endosulphan in over 4,715 hectares (ha) spread over the Kasaragod, Rajapuram, and Cheemeni plantations in mid-1970's.

The accusing finger is raised this time again towards a public sector undertaking, the Karnataka Cashew Development Corporation (KCDC), which had been spraying the pesticide over its cashew plantations in Dakshina Kannada (DK) and Udupi districts since 1987.

Assisted by local doctors and school teachers, a few progressive agriculturists in Kokkada and Patrame villages in Belthangady taluk have started a house-to-house survey to enlist the diseases that many people have been suffering silently for long. What had so far been looked upon as a curse of the gods or a natural misfortune is now being portrayed in a different light. The telltale images of the misery that have come out so far from the villages are that of children with deformed or lifeless limbs, bulging heads, blurred vision, physical and mental retardation.

One and half year old Rakshitha, daughter of Jayalakshmi and Boragowda in Patrame, has been vaguely diagnosed by local doctors as having an incurable nervous system disorder. She can't stand up or sit on her own. Just a few houses apart, agricultural labourers Kushalappa and Kusumavathi are finding it difficult to provide medicines to their 18-month old son Shobith, suffering from "developmental delay." The young boy was taken once to the Chetana Hospital in Puttur and has been advised prolonged treatment. Eleven-year old Udaya, son of Monappa Gowda, is mentally and physically retarded and has to be carried by his mother Lolakshi. Within half a kilometer off the Kokkada-Patrame mud road, there are at least four children with severe growth retardation and physical deformities, all attributed to problems in the central nervous system.

The search for the "children of endosulphan" in Dakshina Kannada began soon after Hari Rao Marlaje, an agriculturist in Kokkada, gathered details of the tragedy reported widely from villages such as Padre, Bovikkanam and Periya in bordering Kasaragod district in Kerala. A Peoples' Committee has now been formed for carrying out a health survey in Kokkada and Patrame villages. In the area, kcdc owns nearly 500 ha of old cashew plants, partly wild growth and partly planted after denuding thick natural forests under a World Bank aided scheme in the 80's. Almost all the plants have by now become senile, requiring uprooting instead of repeated aerial sprays of pesticides.

KCDC has control over around 5,000 ha of cashew plantations in Karnataka. The official version of the kcdc Managing Director C Krishna is that "only selected cashew gardens giving an income of more than Rs.10,000 per ha and not interspersed with dwelling houses are covered by the prophylactic aerial spraying." Local activists disagree, pointing out that drifts from the aerial spraying covers many villages and hits a large number of hamlets (Gundile, Southadka, Mallige and Majlu among others) within Kokkada and Patrame villages in Belthangady taluk and many more in Puttur taluk. The plantations spread over five taluks (Belthangady, Puttur, Sullya, Bantwal and Mangalore) in Dakshina Kannada district and Kundapura taluk in Udupi district.

Muralidhar, a doctor running the Ashwini hospital and clinic at Nellyadi, says that in recent years he has been getting several cases of congenital abnormalities. One baby delivered by a woman from Kokkada had the brain completely exposed. Another child that lived for a few minutes did not have the abdominal walls and the internal organs remained exposed. There was also a case of hydrocephalus -- unusual enlargement of the head. Muralidhar saw all these cases in the last one year.

Sudha, his wife, has attended to more than 10 cases of repeated abortions, sometimes even four abortions in a single woman. Infertility, both male and female, are on the rise, the doctors say. A few months ago a 22-year old girl died of breast cancer, a disease which has not been reported so far in young girls in these areas. "People in Kokkada and Patrame are reluctant to go for specialised treatment. They and their doctors seem to be convinced that the diseases are incurable," says Muralidhar. Many families in these villages can't also afford prolonged treatments.

Unlike in Periya in neighbouring Kerala, where local activists had succeeded somewhat in collecting information on reproductive system disorders possibly caused by endosulphan, the reproductive health status of women in dk remains to be probed. The survey teams that are now at work have so far focussed only on children. The information they have gathered so far remains largely anecdotal.

At Mallige Majlu, where nearly 50 families have many miseries to narrate, 44-year old Usman says his neighbour Isubu had been behaving strangely for the last few years since going into the cashew plantations on a day of spraying. Usman's son has been bed-ridden for the past 14 years. The family has spent much money on treating him, but to no avail. He says many diseases -- mental aberrations, suicidal tendencies etc. in the grownups and growth retardation in children, are being seen in the area in the last 4-5 years. Usman's younger brother was also treated for mental illness at a hospital in Shimoga.

In Kokkada and Patrame, even now there is not much awareness or concern on precautions that should have been adopted during and after the spraying of endosulphan. Hariprasada, a farmer and secretary of the local endosulphan protest committee, says the kcdc never cared to give the people prior notice of spraying. A few coloured flags hoisted on treetops, as markers for the helicopter, have often been the only signs of the spraying. The stipulation of expert committees that aerial spraying should not be adopted in locations with open sources of water had always been ignored by kcdc. Wells and other sources of drinking water were never given protective covering.

Ivan D' Souza in Mangalore, former chairperson of kcdc, admits that the corporation's mode of giving prior notice on spraying was limited to letters addressed to the panchayats and advertisements in local newspapers. D' Souza, who had boarded the helicopter on a couple of occasions for "jolly rides," says the vehicle often sprayed the chemical from heights of 100-200 metres above the canopy of trees.

Used-up bottles of endosulphan are often the toys with which the children play. Hari Rao says that five years ago, 10-15 cows and buffaloes in Kokkada had died one after the other after drinking water from open ditches used for cleaning endosulphan bottles. Fish-kills have been a regular feature in the Sishila and Kapila rivers. Lolakshi, a resident of Kokkada village, says she and others used to pick up and eat the dead fish from the rivers. Her 14-year daughter Susheela started walking at the age of seven. She is mentally retarded and gets terrified of strangers. Her husband Kittagowda was a well-to-do farmer but he committed suicide three years ago, cutting his throat with a sickle. He had been exhibiting suicidal impulses and had once consumed a large quantity of endosulphan. Another child in the family, daughter of Lolakshi's sister, is now undergoing "oil massage treatment" at a traditional medicine centre for "weakness of the backbone".

In the higher primary school in Kokkada, there are six children with various developmental anomalies -- twisted legs, mental retardation, inability to speak and behave with coherence, poor eyesight: Balakrishna (15), Kavya (11); Thulasi (11), Albin (10) Saritha (9) and Rakshit (6). Shantha, the head teacher of the school, has information that six other children studying in other schools in the area have also applied for the assistance the government gives to "handicapped" children. "All such cases are in young boys and girls below 18 or 20 years of age. I do not know whether all these are due to endosulphan or not, or whether all these children come from cashew areas. But I am sure this problem has become more visible in the last 5-6 years."

Cashew is not the only crop for which endosulphan is applied now, ever since KCDC introduced its large-scale usage in the area. According to Hariprasada, the secretary of the endosulphan protest committee, cashew is not the primary breadwinner for any individual farmer in the area. They find no need for even hand spraying of endosulphan on cashew. During his tenure as chairperson of kcdc, Ivan D'Souza had called for reports on the efficiency of aerial spraying in controlling tmb. "We were wasting Rs. 60-70 lakhs annually in the name of pesticide spraying. Besides being ineffective, aerial spraying was also destroying beneficial predators, affecting local agriculture," D' Souza said. His suggestion of stopping the aerial spraying was shot down by the KCDC board under pressure from the cashew contractors.

"There are several farmers who argue in favour of endosulphan, because it gives them good yields," points out Somanath Naik of Nagarika Seva Trust, an ngo active in the area. As the government machinery has already stepped in to carry out a health survey in Patrame and Kokkada, nst has shifted its focus to educating the people on minimising the use of pesticides and adopting precautions. "The cashew plantations were established after cutting down more than 10,000 acres of natural forests, destroying biodiversity and bringing in its wake diseases such as Monkey Fever. Even after so much spraying, the plantations yield just around five kg of cashew per tree per year. The cashew plantations should be converted back to jointly managed agro-forests," says Nayak.

The only silver lining in an unfolding canopy of darkness is that the health department in Karnataka has moved rather quickly to make its own assessment of the ground reality, in sharp contrast to the scene in Kerala even 10 months after the media expos since last December. The taluk medical officer has ordered the doctors and three anms (Auxiliary Nursing Matrons) attached to the phcs to visit each and every household in Patrame and Kokkada and identify all the diseases tormenting the people. "We have to cover a population of 4,750 people in Kokkada, another 2,800 in Patrame. We have been asked to look for all diseases, including chronic and uncommon ones," says Prakash, a medical officer at Kokkada phc. He is hopeful that they will be able to come with a comprehensive health profile, be it limited to two villages, by end November. Such initiatives should jolt our leadership and the pesticide industry into joining hands for some concrete action plan to save innocent lives from further misery.