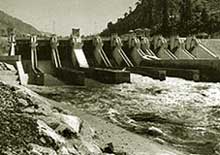 battle-lines have been drawn over the 330-megawatt (mw) Kishanganga hydel power project being set up in the border town of Gurez in Jammu and Kashmir (j&k). Leader of National Conference, the main opposition party in the state assembly, Nazir Ahmad Gurezi, who represents Gurez, recently threatened to resign from the assembly and launch a protest against the project. He claims nearly 25 villages, housing 25,000 people, will be affected. Pointing out that the dam will submerge the entire Dawar area of Gurez, he says people of the Dard tribe will be the worst hit. "A conspiracy is being hatched to knock over the Dard tribe, which resides in the villages surrounding the Kishanganga project...We will never allow the dam to be constructed...," Gurezi announced. He alleged that the government has not taken into confidence the people who would be displaced by the project. They were given a notice regarding the project about 15 years ago, but the matter was shelved later, he adds. The ruling Congress party says Gurezi is opposing the project for mere political mileage.
The project is also opposed by Pakistan on the ground that it violates the Indus Water Treaty (iwt) by diverting the water of River Jhelum. Though experts from both the countries have now agreed for a three-month timeframe to iron-out the differences on the issue, the internal opposition is making things difficult for the state government.

"We do not violate any of the clauses of iwt as far as Kishanganga project is concerned. Pakistan...has no respect for the people...it wants to grab the land and natural resources of Kashmir. That is why it is raising objection to Kishanganga and Baglihar," says Mohammed Sharief Niaz, j&k power minister. "The funds stand sanctioned and the project will be completed on schedule," he stresses.

Chief minister Mufti Mohammed Sayeed has promised incentives: "I have spoken to the affected people and they would be adequately rehabilitated. Plus, the project site would emerge as a tourist attraction."