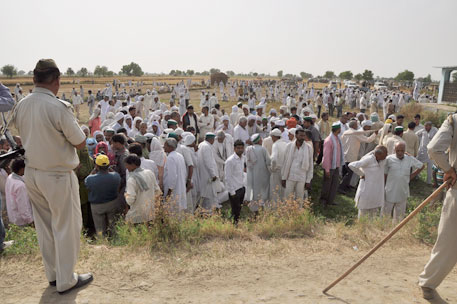 The parliamentary standing committee on rural development has recommended limiting the government's exclusive powers to acquire land in its report on the Land Acquisition, Rehabilitation and Resettlement Bill of 2010. The report, tabled in Parliament on May 17, has also recommended a change in the definition of “public purpose” in the Bill. The clause in the proposed law confers greater powers to the government over private land than the existing land acquisition Act.

Given widespread opposition across the country to land acquisitions for industrial and infrastructure development, these recommendations are critical (see 'Road to disaster'). Since the early 1950s, communities and civil society groups have been demanding review of the government's power to acquire land and also the definition of “public purpose” under the Land Acquisition Act.

The committee, headed by BJP member of Parliament Sumitra Mahajan, has recommended two radical changes: one is to limit the “eminent domain power” of the state and the other is to redefine “public purpose”. Eminent domain refers to the powers of the state over all property within the state, and specifically the power to take over private property for a public purpose (see 'Bias is in the law').  As for tribal areas, land acquisition should be conditional to the village council's permission, the report says. In fact, the panel has asked the government to redraft the proposed Bill to factor in constitutional powers and protection for tribal people.

The parliamentary panel is severely critical of the Bill. “Instead of restricting land acquisition by the State to defined public purposes and infrastructure projects, the Bill throws the doors wide open for any kind of land acquisition by the State for companies, whether these be State enterprises, private enterprises or public-private partnerships. Such a wide ambit for discretionary  action by the executive amounting to arbitrariness can hardly be reconciled to the high objectives proclaimed in the Preamble to the LARR Bill, 2011,” observes the committee.

Thus, the committee asks: “The three principal factors of production are land, labour and capital. Since there is no question of the State acquisition of labour or capital, even at the margin, why should the State at all be involved in acquiring land, which is the most precious and scarce of the three factors for production, for private enterprises, PPP enterprises or even public enterprises?”

The report has recommended limiting the “public purpose” clause in the draft Bill to linear infrastructure and irrigation, including multipurpose dams, and social sector infrastructure, such as schools, hospitals and drinking water/sanitation projects constructed at State expense.

The committee has suggested that consent of the gram sabha should be mandatory in general for all land acquistions. It has asked for a separate schedule in the Bill on this. “Beyond merely 'consulting' Gram Sabhas, consensus or, at least, consent by the majority of Gram Sabha members (or equivalent body in urban areas where these have been constituted) should be obtained in all matters pertaining to LARR.” The suggested schedule should have detailed activity mapping for all the three tier of Panchayats on land acquisition, resettlement and rehabilitation, the panel says.

For the Scheduled V and VI areas, the panel members have virtually recommended a ban on land acquisition. “The Bill should stress that as far as possible there should be no alienation of land or any land acquisition in Scheduled Areas. Where public purpose projects are unavoidable, special provision should be made for increased compensation and resettlement and rehabilitation provisions that enforce stricter conditions such as relocation in a similar ecological location, with communities being mandatorily relocated together so as to preserve the economic opportunities, language, culture and community life of the tribal communities.” Here also the consent of the Gram Sabha should be made mandatory, the report says. Independent observers are recommended for ensuring this.

The standing committee has recommended scrapping the Bill's fourth schedule that contains a list of 16 Central Acts exempted from the new Act. Arguably, these exceptions keep around 95 percent of total current land acquisitions out of the Bill's purview. “There is no need to exempt any of these Central Acts from the purview of LARR Bill and the Fourth Schedule and Clause 98 be deleted. To bring these 16 Central Acts at par with LARR Bill, these Acts will require amendments. The Committee, therefore, recommends that along with the passage of LARR Bill, necessary amendments should also be made in these 16 Central Acts, particularly for the purpose of land compensation, provisions of R&R entitlements and provisions of infrastructural facilities to the land owners/affected families,” the report says.