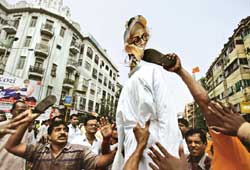 the furore over Tata's proposed Rs 1,000 crore small car plant in Singur, Hooghly may be creating rifts among longtime Left partners, it's also helping bring old foes together. But the fear of being labelled anti-industry has the new allies still hedging their bets.

The latest installment of this drama began around 1230 am on September 26, less than 24 hours after Mamata Banerjee began her hunger strike protesting acquisition of farmland for the proposed 426-hectare (ha) plant site. The state police and Rapid Action Force personnel physically lifted the Trinamul Congress leader and supporters of the Singur Krishi Jami Bachao committee from their dharna in Singur and transported them back to Kolkata. A distraught didi shifted her sit-in to Mayo Road in the heart of the city.

Later in the afternoon, Trinamul and Congress top brass shared a dais, after many years, at a rally to protest "police atrocities" on Mamata. Talk was in the air of a "turning point" in Bengal's politics. The very next day, the honeymoon was over. Trinamul's new ally scrambled to set right its "anti-industry" image as Tata spoke out for the first time. Tata Motors's managing director Ravi Kant said the company was under great pressure to meet the deadline to bring the Rs 1 lakh-car to the market by 2008 and would be forced to look elsewhere if the land acquisition wasn't completed within a year.

Congress leaders hastened to assure that they wouldn't oppose the Singur location if no viable alternative could be found. Congress legislature party leader Manas Bhuniya shot off a letter to the chief minister calling for an all-party meeting to put an end to the controversy. "We are not anti-industry. We want Tata to stay in the state, but we don't wish to compromise on the basic interests of the farmers, Bhuniya told Down To Earth. He said the state could look for alternative land in Singur itself that wasn't multi-crop -- a change in stance from earlier suggestions that Tata use barren land in far off districts like Purulia and Bankura. (Trinamul too had recently suggested that the plant site be shifted to Dankuni, not far from Singur, where around 300 hectares acquired by the state for a food park was lying vacant. But the state ruled it out saying the land was marshy and it didn't want to endanger water bodies).

Bowing to pressure, Buddhadeb called an all party meeting on October 4 to discuss the state's industrialisation plans. Trinamul refused to participate. Congress leaders attended the meeting, albeit to suggest that the state first set up a land commission to identify land for industry. Bhuniya denied his party's tie up with Left in New Delhi had anything to do with the decision.

Meanwhile, Mamata's party too, is at pains to assure that Trinamul isn't against industry and development, or even Tata per se. Earlier last month, Mamata addressed the Bengal Chamber of Commerce and Industry and tried to convince the business community about her support for industrialisation, though not on prime agricultural land. There weren't too many takers for her views. And with the Congress now trying to sidestep Singur and more farmers handing over their land every day, the protest movement is losing its emotive appeal. The bandh happened. The Congress kept its promise, though one of its factions was against it. The strike was shortened by half-a-day.

The government is unperturbed. When told of Kant's warning of looking elsewhere, Buddha Babu calmly assured "Shob theek achhe (everything is fine)."