In the Vidarbha region which is facing 30 per cent rainfall deficit in the first half the monsoon, the situation is very grim 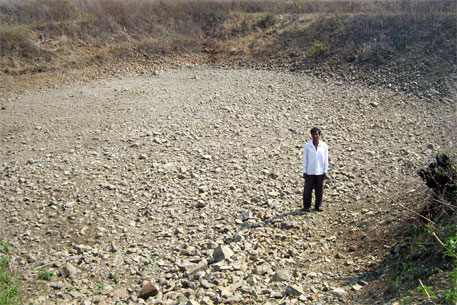 The drought in Maharashtra is worsening. With 15 talukas just declared drought-hit, 136 out of a total 355 talukas in the state are now officially reeling under drought. They have received rainfall that is less than 50 per cent of average in the state.

Moreover, 15 districts in the state, including the entire Marathwada region, are facing severe rainfall deficit. The state government has announced a 33 per cent waiver on electricity bills for water pumps and 100 per cent waiver of examination fee for school-going students as relief measures in the affected areas.

Farmers, however, say that these measures are paltry if compared to the losses they are facing. We have lost crop after crop to drought, excessive rain, hailstorms and again drought,” says Hanumant Katkar, a farmer in village Narwane in Satara district. “The biggest worry for us now is fodder for our animals. Whatever dry fodder we had saved is gone, and with no rain, there is no fresh fodder.  Government should compensate us for crop loss and provide fodder,” he adds.

A few farmers groups also say that soyabean crop in the state is poised for a total collapse.

Water crisis in the offing?
The state appears poised for a grave water crisis in the coming months unless it rains, say sources from the irrigation department. At present, the live storage in dams is just 64 per cent, compared to 78 per cent same time last year.  In the Vidarbha region which is facing 30 per cent rainfall deficit in the first half the monsoon, the situation is very grim. Water storage in dams is at mere 60 per cent, compared to last year’s 90 per cent. Also it is not clear at all if more rain can be expected, say a few sources.

With no rain, villages in most of the drought hit areas are still depending on tanker water for drinking. According to a few sources in the water supply department, as of August 25, 2014, as many as 1,290 villages and 3,321 hamlets in the state are being supplied water by 1,525 tankers. Last year, the figure was 1,108 tankers for 859 villages and 4,515 hamlets. If rain continues to play truant, the state is likely to witness a severe drinking water crisis in the coming months.