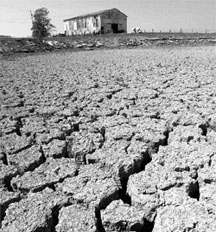 THE drought which hit the us recently may extend to the next year, John Kelly, director, National Weather Service has said. Dan Glickman, agriculture secretary, has declared Connecticut "a farm disaster area" and has issued similar declarations for 19 counties in Maryland, six additional counties in Virginia and one in New Mexico. He added that still more counties in several other states could qualify for assistance. According to experts, this drought is the worst since the 1930s.

After the declaration, the disaster-hit counties will be eligible for emergency low-interest loans for agriculture-dependent businesses. Kelly said it would be a long time, possibly into next year, before enough rain falls to make up for what has been lost. "We expect the drought to get worse in the southeast in the winters. May be the situation will improve a little in the western parts of the country," Kelly told reporters during a briefing at the White House. "For the northeast we expect the drought to persist through Autumn and into the winter," he added. According to official estimates, till now, at least 50 people have succumbed to the continuing heatwave conditions.