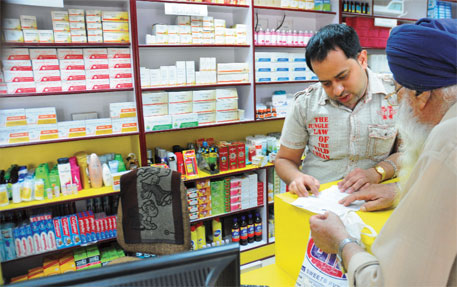 DRUG manufacturers’ associations in the country have written letters to the governments of Gujarat, Karnataka, Tamil Nadu and West Bengal, informing them that a shortage of essential drugs is imminent because wholesalers and retail chemists in the states are refusing to stock essential drugs saying these are not profitable to them. The associations are now planning to inform four more states, Assam, Uttarakhand, Uttar Pradesh and Jharkhand, about the chemists’ alleged move.

The drug associations, All India Pharmaceutical Alliances (AIPA), Indian Drug Manufacturers Association and Organisation of Pharma Producers of India, say that retailers are taking the action in response to the Drug Price Control Order, 2013. D G Shah, secretary general, AIPA, says that the retailers have indicated that they would not sell medicines which come under the list of essential drugs. He says the letter has been written by various associations of pharma companies to avoid any blame game later when the crisis intensifies.

However, wholesalers and retailers claim they are being made scapegoats. “As an association, we have not conveyed any decision about not storing essential drugs to the manufactures or the government,” says Pradeep Trivedi, honorary general secretary of the Federation of Gujarat State Chemists and Druggists.

The secretary of Tamil Nadu Chemist and Druggist Association, N Anandan, says that by cutting down the profits for retailers and wholesalers, manufacturers are saving their own profits. “Even on items which are under price control, such as those in the essential drug list, these companies are getting a profit margin of around 100 per cent, but they are not willing to share it with chemists. On other medicines, which do not come under the price control category, the companies are keeping a profit margin of around 400 to 500 per cent. It is unfortunate that they have sliced our profits,” he says. But Anandan adds that they will continue selling these medicines and will not let patients suffer. He says the organisation is exploring legal options to work out profits with pharma companies. Trivedi says there is nothing in DPCO which prohibits manufactures from sharing profits.

S Srinivasan, managing trustee of LOCOST, a Vadodara-based manufacturing company, says such letters are blackmailing tactics. He says only 14 per cent of the drug market comes under the pricing policy.

DPCO 2013 has been fraught with problems since it was notified by the National Pharmaceutical Pricing Authority (NPPA). The order regulated the prices of the first set of 151 essential drugs on June 14 and gave 45 days to drug companies to start selling the medicines at revised prices. The 45-day-period ended on July 29. A few companies went to court arguing that recalling medicines from the market was not feasible and NPPA should allow the existing stocks to be sold at current market prices. The court ordered a stay on the NPPA order.

The pricing policy of essential drugs has always been controversial. In 2003, the All India Drugs Action Network, agroup of non-profits to improve access to essential drugs, filed a public interest petition and said that the prices of medicines were too high. Eight years later, in 2011, the ministry of chemicals and fertilisers put out the first draft of the National Pharmaceutical Pricing Policy. It was widely criticised by health experts for proposing a drug pricing formula that would make drugs unaffordable.

About a month ago, the apex court of the country agreed to examine the new pricing policy framed by the government. The court, while admitting a petition, observed that even after the lowering of drug prices by the government, the margin of profit for manufacturers and dealers ranges from 100 per cent to 1,300 per cent of the manufacturing cost.

India: access to affordable drugs and the right to health