With just two days left for the Bonn climate meet to conclude, parties are yet to agree on the agenda for the coming year under the Durban Platform—an agreement that will bind all parties for the first time to climate targets. 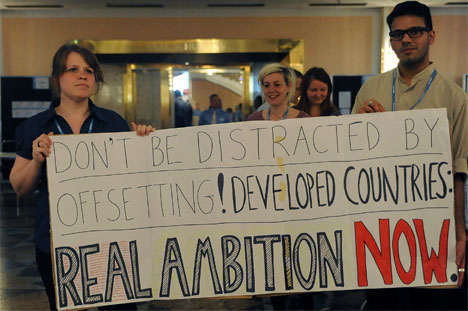 At the latest ADP session, the track on which the Durban Platform is being deliberated, developed countries wanted to move forward with the provisional agenda which proposed deliberation on two issues: a work plan in accordance with the text adopted last year in Durban and a work plan on enhancing ambition. The key outcomes of the Durban Conference of Parties (CoP) was to agree to a post-2020 framework for all to be agreed to by 2015 and the continuation of the Kyoto Protocol through a second commitment period.

Developed countries felt that adopting the agenda was only a "procedural issue", but developing countries were keen on discussing the substance and scope of the agenda. Although this agenda would be only for the first year, it would set the tone and content for the next three years of negotiations.

Will ADP derail discussions along other tracks?
While it is well recognised that all countries need to step up efforts to address climate change, the main point of contention at the meeting was  whether actions from now up till 2020 (pre-2020 ambition) needed discussion under the ADP forum. Broadly speaking, the developed countries (along with the least developed countries) said yes; the developing countries (many under the G77 banner and China) said no.

The developing countries, for their part were mainly concerned that discussing pre-2020 ambition under the ADP track could undermine the negotiations already going on under the other two tracks—AWG-KP and LCA; one discusses the targets of countries under the Kyoto Protocol and the other deals with the ambition level of those outside the Kyoto Protocol. Ongoing discussions under both these tracks differentiate between the level of effort needed by developed countries on one hand and developing countries on the other; developed countries are required to take the lead. The delegate from Philippines captures this sense of fear: "deliberately pigeon-holing ambition in a single area will pull the plug on the Kyoto Protocol.”

China reiterated this concern further by pointing to the fact that some developed countries had failed to meet deadlines in turning in their targets for the second commitment period under the Kyoto Protocol. The second commitment period will be in effect from 2013 till either 2018 or 2020, under which only the developed countries will reduce emissions.

Some countries, like the EU member states, cautioned the developing countries against reopening elements of the delicately balanced package that was recently concluded at the at the Durban CoP.

Another concern was that of climate action ambition being reduced to just mitigation (reducing carbon emissions) as is presently being discussed at Bonn. Those familiar with climate negotiations know that the Bali Action Plan mandated the LCA track to address all areas of ambition, not just mitigation, and technology, finance and adaptation were all part of the package. Philippines requested the chairperson of the session to amend the agenda to reflect the inclusion of all these elements under ambition. These concepts appear in paragraph 5 under the CoP text. He insisted that this would be a more inclusive way of addressing all the elements instead of singling out ambition as a separate item in the two-track approach. This was opposed by the US, the EU and Australia.

In an attempt to explain their position, the EU stepped in to add that the inclusion of ambition was negotiated at the last minute in Durban to ensure that the demand of the least developed countries was met. Their concern was that of lack of enough ambition in the interim period between 2012 and 2020, which is too long a time frame for countries that are the most vulnerable to the impacts of climate change.

China clarified that the work on “enhancing mitigation ambition” must take place. Its concern was that the issue should be discussed under the appropriate forum. The delegate expounded:  “decision 1/CP17 addressed many elements but that did not mean that all elements belonged to the mandate of the ADP.”