Only five per cent want to stay in their work places, according to the organisation’s latest mapping exercise of migrants 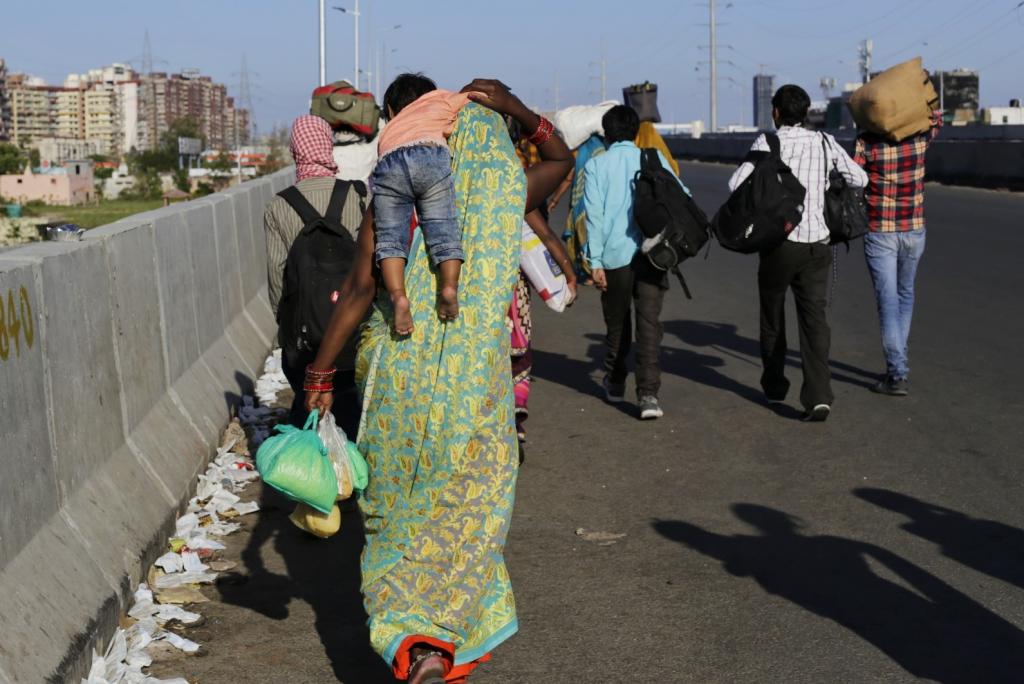 Migrants trudging on a flyover in Delhi during lockdown. Photo: Vikas Choudhary / CSE

As high as 95 per cent migrant workers would like to go back to their place of residence in spite of the insecurity of financial loss or unemployment thereafter, according to an ongoing mapping exercise undertaken by land and forest rights organisation, Ekta Parishad.

Out of the total 31,423 migrants (who are stuck outside at their city of work) interviewed till May 20, 2020, only five per cent said they would like to stay back in their respective workplaces.

Moreover, the average availability of food in the absence of any relief measures was around four to five days per family and 86 per cent of them are uncertain of their livelihood and life.

The top five states with the highest number of migrated workers, who are stuck, were Madhya Pradesh, Manipur, Bihar, Odisha and Assam.

Even after two months of lockdown and government efforts in arranging transport for them, around 65 per cent migrant workers are still completely uncertain about their means of travel and money for tickets after lockdown.

Migrant labourers are the worst sufferers of the pandemic and the subsequent lockdown and a large part of the problem is that the state governments don’t have an idea of the number of migrants and of their intra- or inter-state movement.

Ideally, each state government’s labour department should maintain a proper record of this. But such records are either not available or are incomplete and insufficient in giving a correct picture, Ramesh Sharma, national coordinator, Ekta Parishad, said.

Due to this, they have been left out of the government relief measures of food relief and cash transfer, he added.

Ekta Parishad has been trying to map the migration pattern, both inter- and intra-state for the past month and reaching out to those who are stuck away from their place of residence.

Through a primary survey of 24 questions, started on April 11, its volunteers are collecting information to create an online database of migrants.

They are doing this by tracking them down through field visits in at least 15 states where the organisation has a strong volunteer base and through local grassroots organisations in others.

It is also getting information with the help of some state governments that have put up contact details of the organisation on their websites as helpline numbers.

The organisation is also making a migration atlas in which it is drawing larger migration patterns like the availability of average food in a family, gender profile of migrants, inter- or intra-state and average income.

“The state’s labour officer should keep a database of how many migrants are there and where they are migrating to. That is how we have an exact idea of their movement,” Sharma said.

“But this granular data is not available. So, when it comes to ration or DBT (Direct Benefit Transfer) percolating down, the government is randomly distributing without a proper database. States are clueless how many of their labourers are stuck where. It is gross ad hocism,” he added.

According to the survey results, it was visible that migration was prevalent across 22 states in India, he said.

“Another migration pattern that we were able to see was the gender component. For example, in the tribal areas of Madhya Pradesh, 60-70 per cent families travelled with their families but in areas like Odisha and Assam, only males travelled,” he added.

The Ekta Parishad also prepared an inventory of such poor families and drew up a calendar for ensuring food supplies to them.

“We are giving a ration for 10-14 days, depending on the need of the household. It includes rice or wheat, pulses, oil, potato, and salt,” Sharma said.