In a bid to give more fiscal autonomy to states, the Centre in the last budget gave them a higher share in Union tax receipts. Has this helped the states? 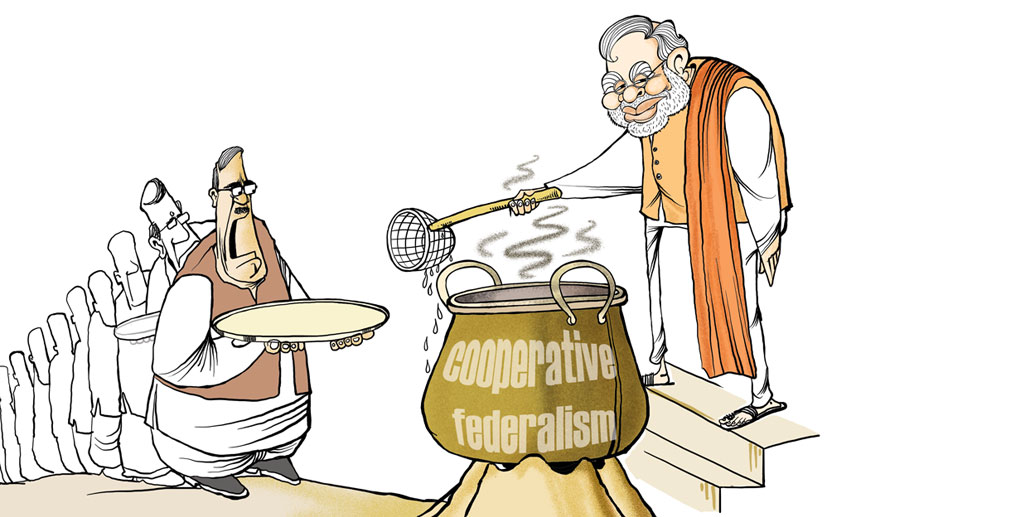 On February 29, Union Minister of Finance Arun Jaitley will present the third budget of the National Democratic Alliance (NDA) government. And the highlight this year will be the performance of Prime Minister Narendra Modi’s bold fiscal decentralisation that was rolled out in the last budget.

Accepting the recommendation of the 14th Finance Commission, the Union government in the last budget devolved 42 per cent of the Central tax pool to the states. Before this, the share was 32 per cent. In plain monetary terms, the percentage increase translated to Rs 5.2 lakh crore in 2015-16. This is the money states can spend as per their wishes. The prime minister called the decision his first step towards realising his popular and desirable slogan of “cooperative federalism”.

The success of the move is extremely important to the Centre, especially now when it faces limited options to raise revenue because of the overall economic slowdown. Besides, the Central government has to spend on the 7th Pay Commission recommendation and the One Rank One Pension commitments, which will collectively cost close to Rs 100,000 crore to the exchequer.

From the beginning, many states have raised objections over the inadequate financial transfer under the move. Civil society groups have also raised concerns over the fear that states might reduce the spending on crucial social sectors such as health and rural development. Their fear stems from the fact that the Centre massively slashed budget allocation for most of the centrally assisted schemes and completely stopped assistance to 24 schemes. The Centre has also slashed its assistance to state and Union territory plans from Rs 329,712 crore in the budget estimate of 2014-15 to Rs 195,778 crore in 2015-16. Consequently, Central-tied grants, which accoun-ted for 46 per cent of the total transfers to states in 2010-11, came down to just 25 per cent of the total fund transfer in 2015-16.

Down To Earth correspondents spoke to state finance ministers and government officials, and analysed budget documents to understand how this historic decentralisation has progressed. While most say that it is too early to judge, there is an increasing belief that the roll-out has not been well-thought-out. Many states have gained money-wise, but have failed to channelise the funds in the right direction. This, at a time when the country is witnessing an economic slowdown that warrants enhanced public spending. There is also confusion over the amount of money that will be transferred and over the fate of the ongoing Centrally sponsored schemes. Many think that the fiscal decentralisation was rolled out at an inappropriate time. “The 14th Finance Commission report was ready by December 2014. But it could not come into public domain until it was placed before Parliament. By that time many state governments had formulated their budgets for 2015-16. So they did not factor in the recommendations,” says Bibek Debroy, economist and a member of the NITI Aayog.

The net resources transferred to states and Union territories in the 2015-16 budget was Rs 842,963 crore, which was 23.2 per cent more than the previous fiscal’s transfer of Rs 6,83,966 crore (in the revised estimate). “It will be only in the budget of 2017-18 that the recommendations will reflect. The current year would be the process and 2017-18 perhaps the year when actual institutional change would take place,” says Debroy.

Many states, particularly the ones with large poor population and heavy social spending, have complained that the sharing of Central pool of taxes will not be adequate. Data shows that BIMARU states like Bihar and Rajasthan have not benefited from fiscal decentralisation. Though their share in tax pool has increased, the slash in Central grant-in-aid to states meant the actual funds available with poor states like Bihar and Rajasthan remains largely unchanged. These states are also not known to spend on development on their own.

For example, Bihar’s share in central tax pool has increased by 21 per cent, but the central grants that the state received dipped by 42 per cent. As a result, there is a net loss of around Rs 4,000 crore in the state’s budget. For Rajasthan, the share in tax pool went up by 27 per cent while it saw a dip of 28 per cent in Central grant-in-aid. “From the point of view of states, there has not been much increase. However, the composition of money share has changed. Now states have the autonomy to manage a significant share of the central tax pool,” says Sudipto Mundle, a member of the 14th Finance Commission.

As per the information received from Sikkim’s finance department, the 14th Finance Commission has overestimated the state’s revenue receipt and underestimated its expenditure. As a result, the state will incur an estimated shortfall of over Rs 5,800 crore between 2015-16 and 2019-20 in respect to state’s own revenue. It was further added that the state is not eligible for the post devolution revenue deficit grant. Under the commission report, the Centre will give the grant only to “states having post devolution revenue deficit”. But calculations done by the commission suggests that Sikkim will have a post devolution surplus of Rs 6,181 crore, which the state government says is unachievable.

Similarly, the Kerala government feels the autonomy will be of little use because states will have little additional funds to invest. “The last Union Budget came as a sore disappointment for Kerala as it gave a short shrift to the state in more than one way. Cloaking the truth, the Union budget last year tried to justify the cuts in expenditure on the grounds that more funds have been transferred to the states,” says Kerala finance minister K M Mani. He adds that even the percentage increase is not sufficient to carry out development. “What has now happened is that there is more autonomy for the states without any worthwhile increase in the funds that will flow into the states. Kerala had sought an increase in the devolution from 32 per cent to 50 per cent, but the 14th Finance Commission increased it to 42 per cent, which is only a modest increase in the share of central taxes. This leaves us with little money for new developmental initiatives,” Mani says.

But NDA-ruled states Maharashtra and Gujarat have openly supported the decision. Maharashtra finance minister Sudhir Mungantiwar says, “The devolution has allowed for more funds. Due to this our capital expenditure has increased by Rs 4,000 crore. This has been beneficial to the state.” He admits that there have been some problems to begin with. “Lack of clarity on the sharing of costs between the Centre and state for several schemes and projects delayed planning and allocation of funds. But the situation was clarified in October and everything has been smooth since.” Gujarat finance minister Saurabh Patel says, “There were no hiccups during the transition. We are a revenue surplus state. We do not need to worry much.”

Sonal Varma, an economist with consulting firm Nomura, thinks the basic idea behind the move has been achieved because states will have more funds to spend. “Whether states spend that money in revenue expenditure or channelise that money in social sectors depends on them,” says Varma. It has been the trend that states spend more on revenue expenditure such as salary and pensions at the cost of assets creation (capital expenditure).

“Fiscal decentralisation is a new framework and the states might take time to develop a mechanism or a structure to channelise the money in a better way,” says Varma.

Nagesh Kumar, head, South and South-West Asia Office, United Nations Economic and Social Commission for Asia and the Pacific, thinks it is early to comment whether decentralisation has pushed states to spend more on the social sector. He, however, adds that the country’s overall spending on the sector has increased. “It is a very recent step. So, hopefully in the future we will see more social spending because states will have more resources,” he says. On being asked if the states lack the mechanism to channelise the funds properly, he says, “I think there is a variation among states. Some are very efficiently organised like the southern states and some are getting there.”