The importance and necessity of a circular economy, which means cheaper products and services and reduced congestion and pollution, cannot be overemphasised

At the industrial estate road in Vapi, the hub of paper mills in south Gujarat, there is feverish activity. Lorries carrying imported wastepaper make a beeline. Mountains of trash can be seen heaped inside the mills, ready to be recycled. In what can be considered a golden example of the circular economy model, paper recycling is booming in India, with a surge in the import of wastepaper.

Worldwide, countries are refusing to be dumping grounds of trash, forcing developed economies, which are huge waste generators, to look for alternatives. In 2017, China announced a ban on the import of 24 types of scraps, including paper, applicable from January 1, 2018.

The announcement sent shock waves in the UK, the US and the European Union, which are still trying to find ways to manage their waste. What came as a shocker to the West gave a new lease of life to paper manufacturers in India, many of whom had been struggling due to the shortage of raw materials.

Paper already accounts 50 per cent of all dry waste generated in urban India, followed by plastic (14 per cent), glass (6 per cent), textile (5 per cent), wood (3 per cent), metal (1.5 per cent) and residue (20 per cent), as per a 2011 working paper prepared by the Department of Industrial Policy and Promotion under the Union Ministry of Commerce and Industry. After the Chinese ban, India’s import of wastepaper spiked.

“The waste dumped by Western countries in India is fibre-rich. Here, we have plenty of labour for recycling paper and the cost of production is also low. So, it is a win-win situation,” says Akhilesh Kumar Sharma, a paper technologist and the chief executive officer of Rama Pulp and Papers Ltd based in Vapi.

Recycled paper is used as a raw material in India for manufacturing newsprint, paperboard, duplex kraft paper, note-books, packaging materials and tissue papers. It is also exported to the US and the UK as finished products.

Apart from Vapi, Muzaffarnagar in Uttar Pradesh, Baleswar in Odisha, Amritsar in Punjab, Nagpur in Madhya Pradesh, Rajahmundry and Visakhapatnam in Andhra Pradesh, and Sathyamanglam in Tamil Nadu are the major wastepaper recycling hubs of the country.

Though things look good right now, the circular economy model of paper recycling poses a risk of importing contaminants and India runs the risk of becoming a dumpyard like China was. “European countries do not conduct any formal sorting due to the lack of cheap labour.

So, paper waste mixed with contaminants like plastic, glass and aluminium gets imported here. Also, while some mills have a proper system to dispose plastic mixed with paper, most just dump it in the surrounding areas, says Sharma.

Import and export of paper, paperboard, and paper product wastes is regulated as per the Hazardous Wastes (Management, Handling and Transboundary Movement) Rules, 2008. The rules do not permit contaminants for 31 of the 48 graded of imported wastepaper and up to two per cent contaminants for the remaining. The consignment has to be sent back to the exporting country in case of any violation of the rules. Though there are consignment checks at major ports, the procedures are lax and sometimes the rate of contamination is as high as 10 per cent, say paper manufacturers.

“During custom examination we present documents for clearance. A pre-inspection certification agency should check how much contamination a consignment has. But mostly the cargo is passed without checks,” says Gagan Ahluwalia, founder of Paper Fiber Impex, a Delhi-based wastepaper importing firm. “In China, these consignments go through efficient scanners that check for contamination. Such scanners are hardly available in any Indian port,” he says. 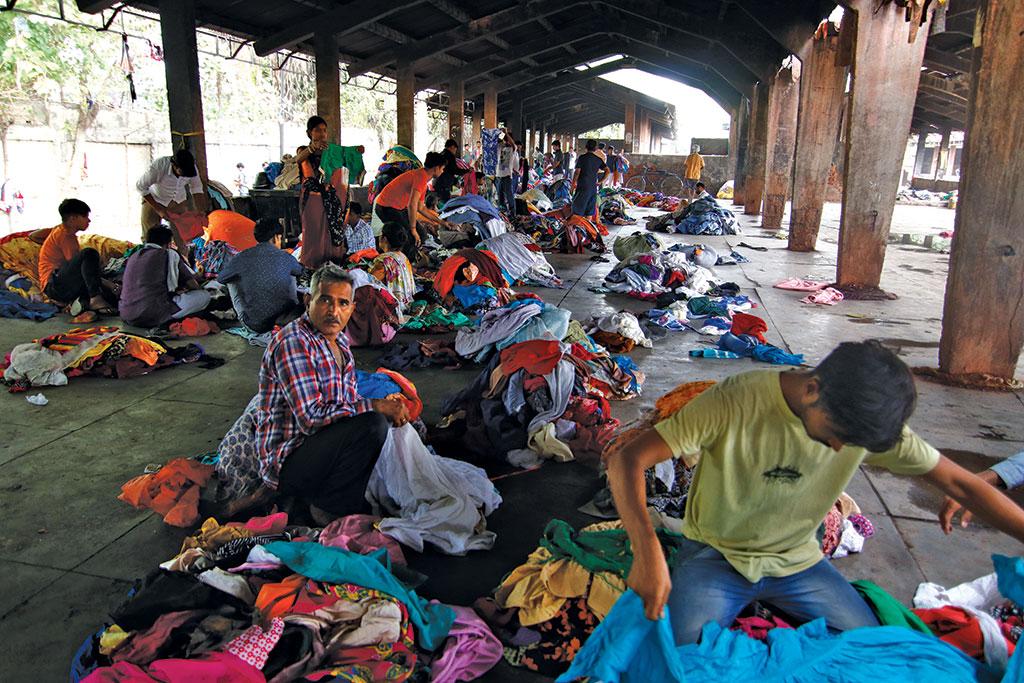 THE CONCEPT OF reuse is not new to India. The practice of younger siblings wearing clothes worn by elders, and babies being clothed in used garments is common across cultures. Exchanging used cloths for steel utensils when door-to-door vendors come knocking too is quite prevalent. What do these venders do with the clothes they collect? Raghubir Nagar in Delhi houses a market where such clothes are sold.

Considered to be one of Asia’s largest markets for second-hand garments, the day here breaks as early as 3 am for street vendor Karamdas Prakash and his wife Rekha, who sell 50 to 100 clothes daily. The market has some 5,000 vendors engaged in this ancestral business. By 11 am, stillness descends and the market is closed. Post 11 am, Prakash and other vendors sell steel utensils door-to-door in exchange for clothes in different parts of the National Capital Region.

“A considerable number of people cannot afford new clothes. Here, they can get a pair of good jeans in less than Rs 50. It is good that longevity of clothes is being extended this way,” says Prakash.

Mostly, imported clothes are used as raw material for manufacturing new items. In Panipat, Haryana, there are many industries where yarn extracted from woollens and hosiery is used to make blankets, shawls, curtains and bedsheets. Bulk of these items are bought by international humanitarian agencies and sent to Africa and other countries.

Pritam Singh Sachdeva, president of Northern India Roller Spinners’ Association, says that the turnover of Panipat’s recycling industry stands at Rs 7,000- Rs 8,000 crore from exports and 80 per cent of the business is based on recycled yarn.

Apart from Delhi and Panipat, Kandla in Gujarat is another major hub of used textiles. The Kandla Special Economic Zone is one of India’s largest centres for sorting and grading textile waste.

There are a few sectors of circular economy in India that are yet to pick up pace but have tremendous scope for growth. A 2018 report by the Federation of Indian Chambers of Commerce & Industry (FICCI) says that “half-a-trillion dollars worth of economic value can be unlocked” through circular economy business models by 2030 in India. One such sector is e-waste. The FICCI report says that just extracting gold from e-waste in India can yield $1 billion.

However, informal recycling operations have been in place for a long time, with over 1 million poor people in India involved in manual recycling operations, says the “Global E-waste Monitor 2017”. They, in fact, recycle about 95 per cent of the country’s e-waste, says a 2007 study by Manufacturers’ Association for Information Technology, an association of informationtechnology companies, based in Delhi. Bringing them to the mainstream will not only streamline the way they recycle the hazardous waste, but also help the country realise its e-waste recovery potential.

One of the prerequisites for harnessing the business and economic potential of e-waste is proper inventorisation. This will attract investors to the e-waste recycling industry as they can clearly evaluate the resource recovery potential of materials contained in e-waste.

Scrap plastics and end-of-life-vehicles (ELVs) are the other sectors that can grow massively. The FICCI report says that 40 per cent of plastic waste in India is uncollected and, if properly managed, represents a $2 billion opportunity. The report also says that over 8 million tonnes of steel can be recovered from ELVs in India by 2025, representing a $2.7 billion opportunity.

“A circular economy development path could significantly mitigate negative environmental externalities. For example, greenhouse gas emissions could be 23 per cent lower in 2030 and 44 per cent lower in 2050 compared with the current development scenario, helping India deliver on its targets promised in the recently ratified Paris Agreement,” says a 2016 report by the Ellen MacArthur Foundation.

A circular economy also means cheaper products and services, and reduced congestion and pollution. As such, its importance and necessity cannot be overemphasised.