Migrant workers cover their belongings in sacks and carry it on their heads Photo: Arindam Ghosh

Thousands of migrant labourers from the Bundelkhand region — who worked in the National Capital Region — were forced to return home in the last week of March 2020, facing long-term loss of their livelihoods, amid the nationwide lockdown to curb the spread of the novel coronavirus disease (COVID-19).

Families of migrants from the region — covering areas across southern Uttar Pradesh and northern Madhya Pradesh — reached their villages with no land to cultivate or any other sources of employment.

This was compounded by the fact that scores of workers were forced to forego social distancing norms and return to their villages on foot, at great risk of being exposed to the disease.

Several workers — many of them accompanied by families, including women, children and the elderly — walked day and night and were seen sitting in groups at several areas around Gwalior and Kanpur.

They were left to fend for themselves after the announcement of the lockdown, with no public transport at their disposal and little to no savings left.

Workers whose villages were far off, covered 400-500 kilometres on foot, while carrying their belongings in sacks on their heads and attempting to hitch-hike.

Several workers with families carried children on their shoulders on their journey home.

Dinesh Ahirwar, 45 — with his family of two brothers, their wives and children — reached Palval in Haryana on March 17 from their hometown of Tikamgarh in Madhya Pradesh, just to be let go from work after a few days.

The family first walked to Jhansi and then undertook the rest of their journey to their home town from there. 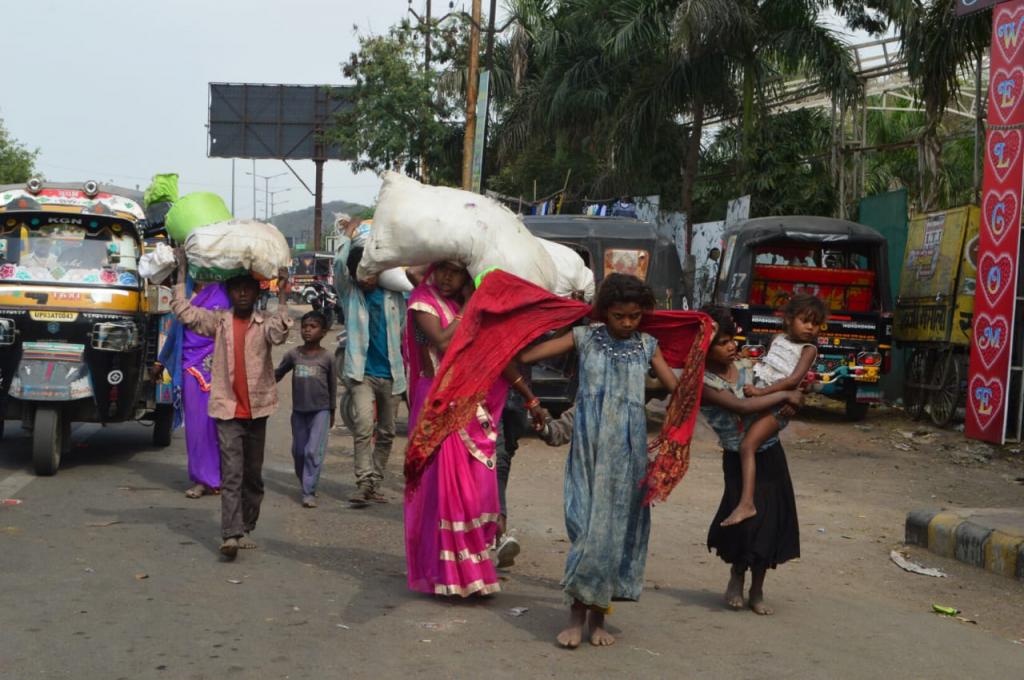 “Our factory owner gave us food that lasted for a few days and let us off,” said Dinesh, a migrant labourer.

Chaturbhuj, 35, a labourer in Gurgaon, undertook an ardous five-day journey with his 65-year-old mother on foot to Jhansi.

Volunteers and other citizens tried to provide the migrants with food and water. The local administration attempted to make necessary arrangements to provide food and medical aid to migrants.

Transport, through buses, was also provided.

Reverse migration — such as this — may lead to economic problems because of sudden accumulation of several people in rural areas, according to experts.

Bundelkhand has always been infamous for mass migration to bigger cities because of lack of employment opportunities there.

The region’s geographical limitations have a part to play in this. Farmers in this region were unable to properly cultivate land in this region because of prolonged drought and erratic weather conditions.

Rabi and kharif crops were both affected because of this. People had no other option, but to migrate to other places, as a result of successive crop failures. Migration from the region had reached its peak about five years ago.

Migrant workers earlier earned enough to send a small part of their savings to their old parents and other family members in their villages.

Livelihood will become a burning issue for several who had to return to their villages, according to Shiv Narayan Singh Parihar, a farmer and activist.

“Those who returned will be back to square number one, with no ways and means to earn,” said Parihar.