The novel coronavirus disease (COVID-19) pandemic and ensuing lockdowns in several parts of the world have led to a recession unmatched in eight decades. It will hit emerging market and developing economies (EMDEs) the most, according to the World Bank.

EMDEs could suffer output losses of three to eight per cent in the short term, the World Bank’s Global Economic Prospects analysis, released on June 2, 2020, said.

The average EMDE is less well placed to respond to a global downturn now than before the 2009 global recession, the analysis pointed out.

When the pandemic struck, many EMDEs were already vulnerable from record debt levels and much weaker growth.

A steep growth slowdown expected in 2020 among advanced economies, including China, will generate considerable adverse spillovers for EMDEs, the analysis said.

The slowdown is expected in EMDEs that are open to global trade and are commodity exporters along with those that have less resilient policy frameworks, according to the analysis.

The world’s largest economies — in the United States, the Euro area (a monetary union of 19 of the 27 European Union member states) and China — together account for almost half of the global gross domestic product. 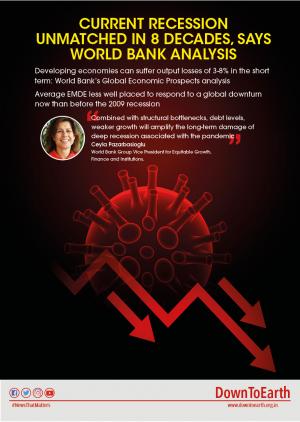 A one-percentage-point growth slowdown in the United States or the Euro Area alone was estimated to reduce growth in EMDEs (excluding China) by 0.8 and 0.7 percentage points respectively in the following year.

A similarly sized growth slowdown in China alone could lower growth in other EMDEs by a 0.7 percentage point in the following year.

Current estimates show 60 million may be pushed to extreme poverty in 2020.

These estimates are likely to rise further, with the reopening of advanced economies being the primary determinant.

The current global recession was accompanied by tighter financing conditions and a record oil price collapse, according to the analysis.

“These two key features of the current global recession — the higher likelihood of financial crisis and a severe terms-of-trade shock to energy exporters — increase the risk of lasting damage to potential output in many EMDEs,” it said.

EMDEs highly open to international trade or deeply integrated to global supply chains will be hit hard by the collapse in global trade, the analysis pointed out.

Talking about long-term effects, it said the pandemic may be “particularly damaging” to long-term growth prospects.

Disruptions caused by measures to contain the pandemic “call into question the viability of global supply chains that have been a foundation of growth over the past two decades”, the analysis said.

In addition to devastating short-term health and macro-economic effects, the pandemic may have significant long-term effects.

The impact of the pandemic may be as large as the impacts from severe climate disasters that result in mortality rates of over 100 per million of the population, the analysis said.

“In less than half a year, COVID-19 already ranks as a major disaster,” the analysis said.

The greater global spread and death toll of COVID-19 than previous epidemics suggest it may have costlier long-term consequences for productivity, it added.

The financing and building of productive infrastructure are the hardest-to-solve development challenges in post-pandemic recovery, he said.

“We need to see measures to speed litigation and resolution of bankruptcies and reform costly subsidies, monopolies and protected state-owned enterprises that slowed development,” said Malpass.