The Punjab government generated employment of 1,052,524 man-days under the MGNREGA since May 12

The project was started on May 12, 2020 to provide work to those who had lost jobs due to the novel coronavirus disease (COVID-19) pandemic as well to the locals.

“Fewer machines are being used to cut expenditure,” Jain told Down to Earth.

“Generally workers charge Rs 400-500 for per person per day. Under MNREGA, however, the wages have been fixed at Rs 263 per person a day,” said Sukhchain Singh, block and panchayat development officer, Derabassi in Mohali district.

In 2019, most work was carried out mechanically and required less manual labour, he added.

The Punjab government began the drive to conserve water for irrigation as well as to recharge ground water by reviving traditional ponds in critical condition.

The extraction of underground water according to the Central Ground Water Board (CGWB) report, 2013, was 149 per cent; the 2019 report pegged it at 165 per cent. Around 14.31 lakh tube wells in the state extract ground water indiscriminately.

CGWB has also warned that if ground water continued to be exploited at the current levels, Punjab would become a desert within 25 years. 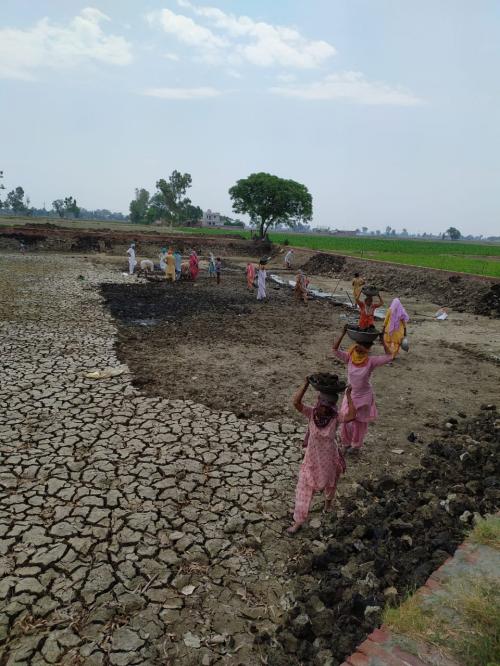 “Gram panchayats have been motivated to keep their ponds and villages clean. They have been asked to show the same spirit which they exhibited in following norms and fostering a sense of brotherhood during the outbreak,” said Kahan Singh Pannu, director, Mission Tandrust Punjab.

The filthy standing water from ponds would overflow during monsoon and go inside houses and lanes, making life miserable for residents, said Bhupender Singh, resident of Faridkot district.

“Women are not encouraged to work in fields in Punjab. We mobilise support through SHGs. Women participate in activities related to pond rejuvenation,” Asif Zaidi, executive director, SST, said.

Water treatment technology for ponds, devised by Thapar Institute of Engineering and Technology, Patiala, is also being set up in over 250 villages, according to Jain.

Amit Dhir, head, School of Energy and Environment of Thapar Institute, told Down to Earth, “We have prepared a model to treat domestic water before using it to fill up the community pond.”

He added that the institute has provided standard structural design to treat water by a village of 1,000 residents with prescribed Biological Oxygen Demand, Chemical Oxygen Demand and PH level.