WTO has buried the development mandate of the Doha round, with India failing to pull its weight at the ministerial meeting 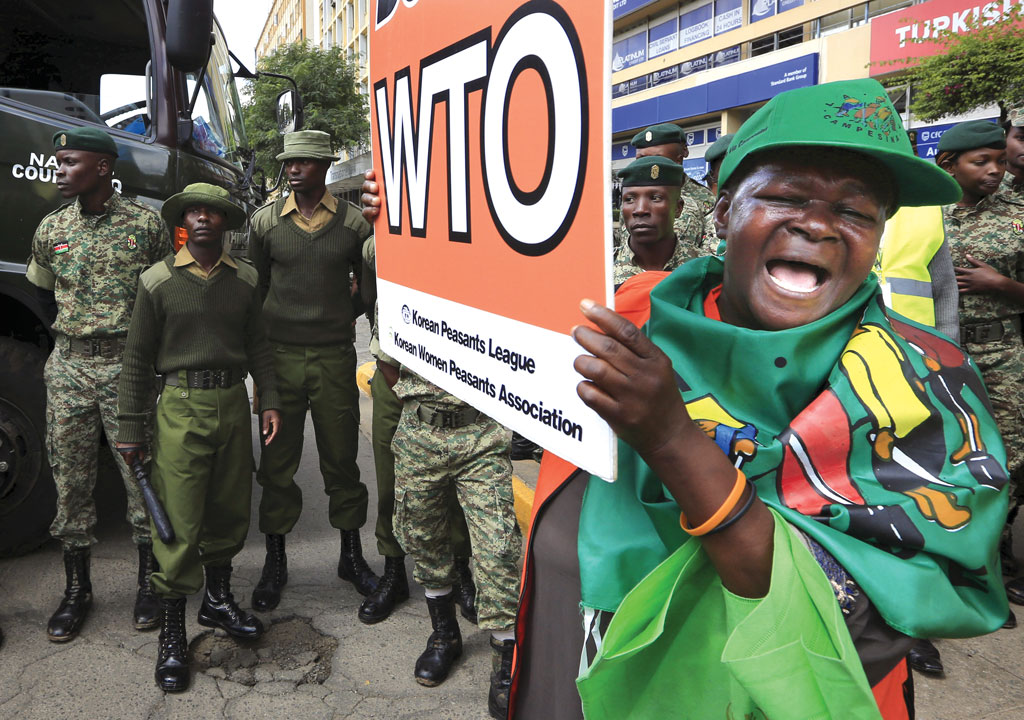 Farmers from developing countries protest opening up of local markets to foreign imports at the WTO meet (Photo: Reuters)

The Nairobi ministerial meeting of the World Trade Organization (WTO) in Kenya last month was the chronicle of a disaster foretold. In the run-up to the 10th ministerial meeting in the Kenyan capital, it was clear that the long-running and hugely contested development agenda of the Doha round of negotiations would be given a quiet burial. And so it has transpired. Almost all the issues that would have benefited the world’s poorer and least developed countries have been shelved or ignored. Instead, new issues­—investment, government procurement and competition policy­­­­­­­—that will open up their markets further to the onslaught of the powerful economies, have been edged in.

“Yes, I did tell you that the Doha round issues are almost dead in water on the eve of the Nairobi ministerial,” admits Biswajit Dhar, professor at Jawaharlal Nehru University’s Centre for Economic Studies and Planning in a conversation with this writer. “But even so I did not expect such a disastrous outcome,” adds the economist and a respected trade analyst. Dhar warns that “the emerging trade regime is far more unjust and disempowering of the poor than at present.” Developed countries are determined to fast track pending libera-lisation measures while brushing aside the development dimension of trade. For India in particular, the outlook is far from reassuring. Not only did it fail to get any work plan on a permanent solution to the contested public stockholding of grains for food security (see ‘Fighting a flawed WTO regime’, Down to Earth, November 15-30, 2013) but it also conceded ground in several areas. One such is the agreement on eliminating export subsidies. This will “further aggravate the crisis in our sugar sector. As it is the entire sugar economy is in distress and the end of subsidies means it will go into a tailspin,” says Dhar.

Another area of concern is the lack of movement on the demands made by developing countries on the Special Safeguard Mechanism (SSM) which gives them some flexibility to act in case of sudden import surges and price dips on products that are critical to their economy. But WTO analysts say the bland reiteration of this right reveals that developing countries are trapped in a dangerous status quo. The warning bells on SSM had been sounded in 2008 when talks broke down in Geneva on their implementation. At that meeting, the US had said SSM should come into force on a volume trigger, that is when imports surge more than 40 per cent over normal levels. “It means SSM is useless,” points out Dhar.

Why did Nairobi end so dismally? Civil society organisations squarely blame India for not showing enough spunk in the Kenyan capital. Although Commerce Minister Nirmala Sitharaman went in with all guns blazing by insisting that the development agenda had to be implemented before the 162-member WTO moved on to new issues, she failed to keep her powder dry when the actual negotiations got under way. The notorious green room negotiations— this is how the backroom deals cut by a few countries are described—appear to have been at play once again. The four-day ministerial scheduled from December 15 was extended by a day but to no avail for India or other developing countries. These negotiations took place between the world’s largest trading blocs, the US and the European Union (EU), along with China, Brazil and India.

Reports from Nairobi show that Sitharaman’s initial strong position—just grandstanding, insist critics like Dinesh Abrol who heads the National Working Group on Patent Laws and WTO—gave way to an ominous silence on key issues and a virtual withdrawal from the arena ultimately. At the open session on agriculture, the minister was categorical that the farmer’s interests would be protected by invoking SSM. Yet what happened at the committee meetings tells a different story.

The most intriguing is Sitharaman’s failure to bring up India’s demand for a permanent solution for public stockholding programme at a meeting convened by the facilitator, Lesotho’s Trade Minister Joshua Setipa. More baffling to WTO watchers is her failure to show up for a meeting that Setipa had convened at her request to discuss SSM. That left in question India’s firmness of purpose in pushing its stated agenda. As a result, the draft put together by the facilitator had nothing concrete on these two critical issues: no timetable for resolving the public stockholding programme or anything new on SSM. This is reflected in the unremarkable ministerial declarations rele-ased on December 19. 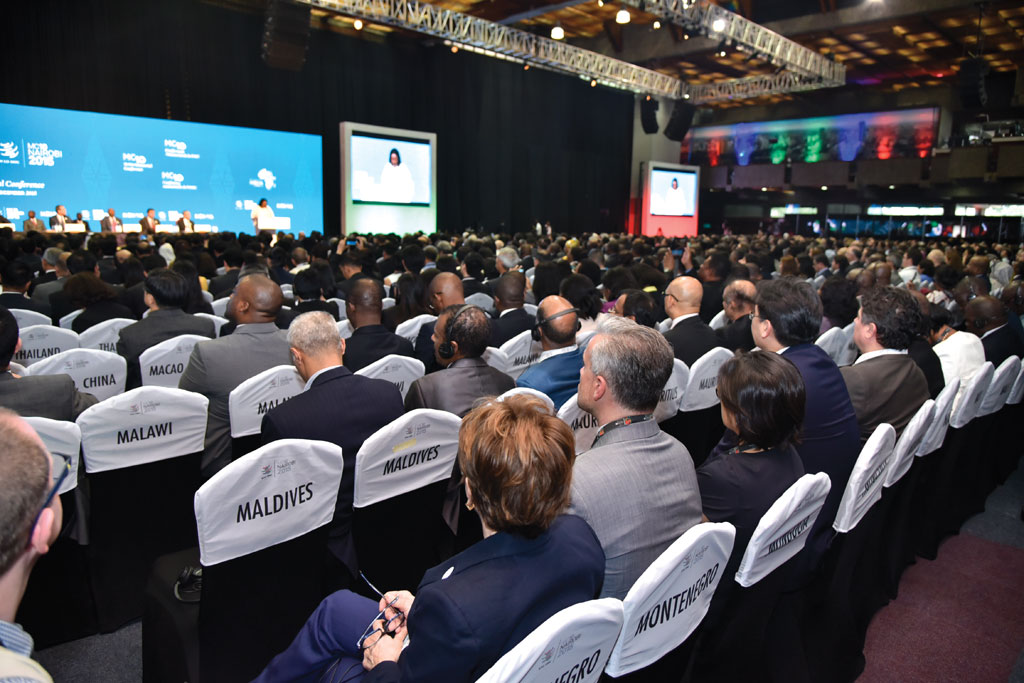 It would appear that in the backroom talks, India was unable to stand up to the might of the trading giants and the loss of an ally. Brazil, once the spearhead for developing country battles, has distanced itself rather markedly from such concerns after its nominee Roberto Azevêdo became the WTO director general two years ago. As for China, it did provide strong support but the country has its own problems as a newer member of the WTO and its priorities could have been divided.

Some reports have hinted at some dramatic backroom developments on the scheduled final day of the Nairobi meeting when Sitharaman called off a press confe-rence and the ministers agreed to extend their meeting by a day to cobble together an agreement. A host of civil society organisations and trade experts have characterised the agreement as a sellout by the BJP government of Narendra Modi.

To understand what could have resulted in India’s abject surrender, as many analysts have described it, one should look at the emerging geopolitics and changing strategic interests in South Asia. Foreign policy analysts have been pointing out that the Modi government’s equation with the US is a key to understanding the sudden shifts and turns in regional politics and policies.

One pointer to the sudden change in India’s stance from aggressive to compliant in Nairobi is that Modi was preparing for his Lahore stopover just a week down the line. Although the spin doctors have called it an “impromptu” decision by the prime minister to end the standoff with Pakistan, diplomatic analysts have said the trip was decided earlier and apparently at the behest of Washington. A leading commentator on India’s foreign policy moves, ambassador M K Bhadrakumar, has written that “the Modi government is proving to be far more willing than any previous government in Delhi” to hitch India’s wagon to America’s regional strategies.

Besides, the new regime in Delhi seems to believe it can do better for itself in bilateral deals with Washington than in multilateral negotiations. For instance, the peace clause that it secured on the public stockholding issue was one such, according to former US deputy assistant secretary of state Teresita Schaffer.

After the Modi government came to power, Delhi had said it would not allow the Trade Facilitation Agreement reached in the Bali ministerial of WTO in December 2013 unless sufficient progress was made towards a permanent solution on its contested public stockholding programme.

Schaffer says the agreement on ending their four-month standoff in the WTO was reached by the US and India “on the margins of a meeting of two East Asia-centred organisations in Myanmar, attended by both President Obama and Prime Minister Modi”. Although the agreement largely restated the original Bali agreement, the important change was that instead of a four-year “peace clause” on agricultural stock-piling, the agreement not to challenge India’s subsidies would last until a perma-nent solution was found. Such calculations on cutting deals with the US could explain why Sitharaman chose to support the Nairobi declaration even if it erodes India’s credibility further with other developing countries.

There are few takers for Azevêdo’s claims on the outcome of the Nairobi ministerial, much of it hyperbolic. “The decision on export competition is truly historic” and “it is the WTO’s most significant outcome on agriculture,” claims the WTO chief who also states that the elimination of agricultural export subsidies is “particularly significant”. That an agreement which was supposed to come into effect two years ago gets a fresh lease of life till 2018 can hardly be termed a significant breakthrough, since the task has been hanging for more than half a century after export subsidies were banned on industrial goods. To use Azevêdo’s own words, the domestic subsidies on farm products have had an “enormous distorting” effect on the market.

It is not as if India alone is to blame for the Nairobi outcome. Developing countries did not make a stand or stick together to exercise their legal rights. “And India chose not to mobilise developing countries,” laments S P Shukla, who was the country’s top negotiator to GATT, the predecessor to WTO. “Worse still, India did not show the courage that a small country like Nicaragua did in the Paris Climate Conference in raising its flag in questioning the arbitrary, stealthy and undemocratic change introduced in the final draft at the last moment.” Shukla contends that it would have been impossible to ignore India in Nairobi if it had stood firm on the Doha agenda.

That is debatable. As it stands, what the developing countries are left with are the remains of the day. The multilateral system of trade, too, is hanging by a thread, with the Nairobi declaration noting that “WTO members have also successfully worked and reached agreements in plurilateral formats”. The reference is to pacts such as the TPP or the Trans Pacific Partnership which will override WTO agreements. That is the menacing shadow looming over the world.