Get ready for post-globalisation era 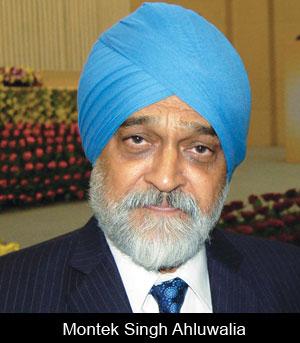 The election of Donald Trump as US President, coming after the Brexit vote, is widely seen as a thumbs down for globalisation. Herewith some comments on implications for trade policy, climate change and the role of multilateral development banks.

The most immediate worry relates to global trade. A slowdown is already under way and pessimists worry that if the threat to raise tariffs, which was mentioned in the campaign, is implemented, it may trigger a Smoot-Hawley-type process, precipitating a severe downturn as happened in the inter-war years of the last century. Things may not turn out as bad, but a fresh protectionist turn in the US will have a negative effect on the global economy which will affect us as well.

Industrialised countries have turned against globalisation because of the perception that it has hollowed out manufacturing and shifted jobs to developing countries. The perception is exaggerated: some jobs may have been offshored, but other jobs have been created, and more could be created if industrialised countries were to undertake the reforms to restart growth and re-skill their labour. From our perspective, the key issue is whether we should remain open or respond by turning inward.

There are good reasons for us not to turn inward. The US, Europe and Japan are likely to have a continuing comparative advantage in the development of new technology, but to sell the products embodying these technologies in world markets, each industrialised country has to be as competitive as possible and it helps them to exploit the lower manufacturing costs in developing countries. There is much talk of robotification and 3D printing reducing labour costs in industrialised countries and thereby shrinking global value chains (GVCs). The technology has indeed advanced impressively, but it is not clear that it would be sufficiently cost- effective to offset the lower costs of skilled labour in developing countries. 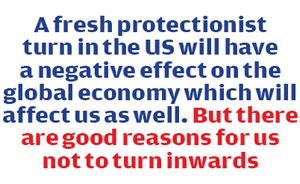 If GVCs are here to stay, even if they expand less aggressively, it follows that we need to position ourselves to derive full benefit from them. Sceptics will be quick to point out that we have not benefited as much as other developing countries from the growth of GVCs in the previous decade, but this is largely because we have not implemented policies that would make us competitive. The policy lesson for us is to focus on overcoming these disadvantages rather than turning our back to continued openness. This is strengthened by the fact that Asia is the part of the world most likely to experience rapid growth, and this region is likely to remain open and pursue trade integration. We should plan to be part of the Asian growth story and encourage deeper trade integration with the other fast-growing Asian countries, including China.

Early conclusion of the Regional Comprehensive Economic Partnership (RCEP) agreement would send the right signal at this time. Unfortunately, the Indian industry has been lukewarm about our regional integration efforts, and some parts of it have even opposed the steps taken. Industry needs to reconsider its position in terms of what is in its longer term interest. They should work harder to persuade the government to remove impediments to our competitiveness, rather than argue for higher tariffs on the assumption that these impediments are here to stay.

We also need to rethink our strategy in the WTO. Trade negotiators have to fight hard to protect national interests, but successful negotiations are also a matter of give and take. Unless industrialised countries can present the outcomes to their domestic constituencies as providing a gain from their perspective, they will marginalise the WTO and push for plurilateral negotiations outside it. This is what led to the Trans-Pacific Partnership and the Transatlantic Trade and Investment Partnership, but as these agreements appear to be stalled, there is a window for showing progress in the WTO. We should review our position on ongoing WTO matters, such as trade facilitation, government procurement, the Information Technology Agreement II and the Trade in Services Agreement. We often act in the WTO on the assumption that we should resist any narrowing in our “policy space” but there may be a good case to change domestic policy where it has become the source of competitive disadvantage. 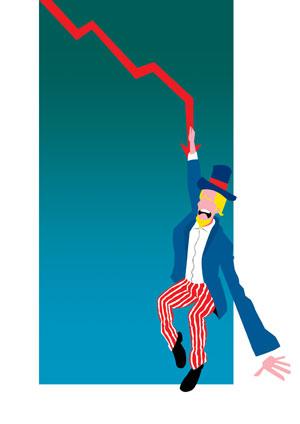 The Paris Agreement has many shortcomings. Nevertheless, it is important because it broke the earlier impasse in the UN Framework Convention on Climate Change and got all the countries on board. It was hoped that as momentum developed it would be possible to improve the agreement in subsequent reviews. A US withdrawal will undoubtedly interrupt the momentum of global cooperation on climate change. It will also create uncertainty about policy in industrialised countries, slowing down investment in the development of green energy technology. It would also put paid to hopes of mobilising financial resources to help developing countries make the transition.

There is not much India can do to counter this development other than urge our point of view in bilateral discussions and use the G20 forum, now chaired by Germany, to persuade the new US administration to stay the course.

A major problem facing developing countries today is the need to invest massively in building sustainable infrastructure that will moderate the energy requirement and therefore the GHG consequences of future growth. The additional investment needed in developing countries on this count is estimated to be between US $1 trillion and $3 trillion per year between now and 2030. This covers investment in new green energy sources (solar, hydro and wind) plus the associated balancing investments. It includes investment in energy-saving urban infrastructure and transport systems.

Multilateral development banks (MDBs), such as the World Bank and the Regional Development Banks, and also the New Development Bank (BRICS Bank) and the China-sponsored AIIB, can all play a critical role in supporting investments in these areas. They can provide technical support in project design and also in devising the policy framework needed to incentivise the shift. They can contribute directly to financing a part of the project. Given the scale of the challenge, private investment in the form of public-private partnerships will be necessary. This calls for an assurance to the private investor that the policy framework is conducive to private investment and that policy will be stable over the life of the project. The involvement of MDBs in financing these projects even in a limited way will help reduce risk perception in the private sector and be an assurance against whimsical policy changes.

The G20 had, in the past, called upon the World Bank to prepare specific proposals on how MDBs can help in this area. No credible proposal has emerged thus far, but with the World Bank President having just been elected to a second term, it is opportune to push for concrete action.

A recent report by the Center for Global Development has recommended that of the $3 trillion additional investment that may be needed annually in developing countries, $200-250 billion should come from all MDBs taken together. The current flow from these institutions for infrastructure is about $50 billion per year. The biggest contributor is the World Bank and it must play its part in meeting the enhanced target for MDBs. Indeed, it must give a lead. An increase of the order required will only be possible if the major member countries agree to a large increase in the World Bank’s capital, along with a clear mandate to develop a work programme for action in this area.

Industrialised countries have been reluctant to expand the capital of the World Bank. They say there is no shortage of funds from the capital market and the real constraint is the absence of well-prepared projects and a credible policy framework that would attract private funds. The case for greater involvement of the World Bank arises precisely because its involvement can help in both the areas. World Bank lending would not substitute for private flows—it would, in fact, leverage them. The need to push in this area is all the greater if climate change negotiations run into difficulties, especially in the area of mobilising finance. Once again, the G20, under the German presidency, is the logical forum to push these ideas.