For all the noise around cow protection, NDA's cow mission, the very first it announced on assuming power, has nearly died 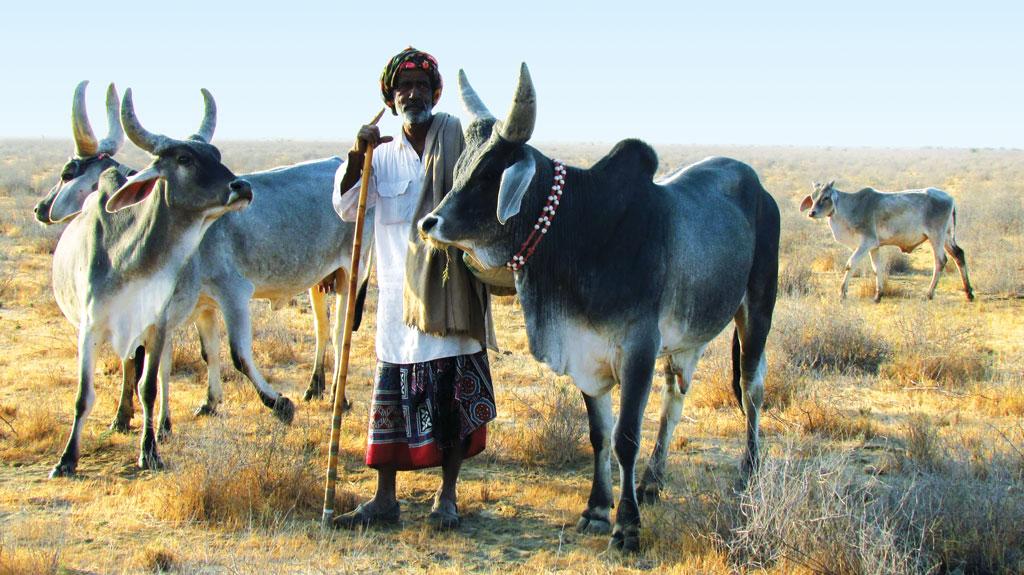 The Kankrej breed of cattle from Gujarat is valued for both milk and draught power (Courtesy: landscapes.org)

This is bewildering. More than two years have passed but the Bharatiya Janata Party (BJP)-led government at the Centre, whose leaders sing the virtues of cow and do not shirk from using the animal as an instrument of political warfare, has failed to implement a scheme for the conservation of native cattle breeds.

The programme was originally launched in 2013 during the regime of the United Progressive Alliance II government and was named the National Programme for Bovine Breeding and Dairy Development. In 2014, after the BJP came to power, it renamed the programme Rashtriya Gokul Mission (RGM) and sanctioned Rs 150 crore for setting up 15 gokul grams (cattle centres) across the country. But not a single centre can be seen on the ground. Worse, several states have shown disinterest in the programme, while Goa and Rajasthan, two BJP-ruled states, have bluntly refused to implement it (see ‘No love for cow’). Though 10 states have agreed to set up gokul gram, they are dragging their feet over it, citing inadequate funds and resources.

At gokul gram, the state livestock depar tment is expected to improve the stock and productivity of indigenous cattle breeds, whose population is rapidly decreasing. Between 2007 and 2012, their number declined by 9 per cent, while the number of exotic breeds increased by 20 per cent, shows an analysis of livestock census by Down To Earth. Today, these indigenous breeds constitute almost 80 per cent of the total cattle population in the country, but account for only 40 per cent of the total milk production. RGM also aims to improve the genetic makeup of ordinary indigenous cattle by using semen from bulls of elite breeds, such as Gir, Sahiwal, Rathi, Deoni, Tharparkar and Red Sindhi. For efficient implementation of the scheme, each gokul gram would be spread over 209 hectares (ha) and have 1,000 head of cattle.

But states say setting up such a farm is impossible with the kind of funds allocated under RGM as it involves acquiring land, producing fodder, procuring cattle, ensu ring veterinary services and conducting breed improvement programme.

Admitting shortage of funds, V K Arora, joint commissioner, Department of Animal Husbandry, Dairying and Fisheries under the Union Ministry of Agriculture and Farmers’ Welfare, says, “The programme requires at least Rs 300 crore to start. Unfortunately, we have only Rs 50 crore for this year.”

BJP-ruled Rajasthan, the only state which has dedicated a department and a minister for the welfare of cows, refused to implement the scheme after it received Rs 2 crore against its demand of Rs 18 crore for gokul gram. “It is impossible to start a farm with this amount,” says P S Nagar, additional director of Gopalan, livestock board of the state. Goa has also refused to implement RGM, saying it has similar schemes in place.

Although Uttar Pradesh has agreed to set up two gokul grams, it is yet to begin work on them. “We had asked for Rs 10 crore for the conservation of 250 cows over 40 hectares (ha),” says Atul Kumar Saxena, Director (research), Uttar Pradesh Veterinary University in Mathura, who is also in-charge of the gokul gram. But the Centre reduced the amount to Rs 1.25 crore. “We can conserve 20-25 animals with this money, that too on the free land available in the university campus,” he adds. But Saxena’s real worry is how to maintain the farm. As per RGM, the Centre will provide only the capital cost for gokul gram and maintenance expenses will be borne by the state government. But so far, the state is silent about it. 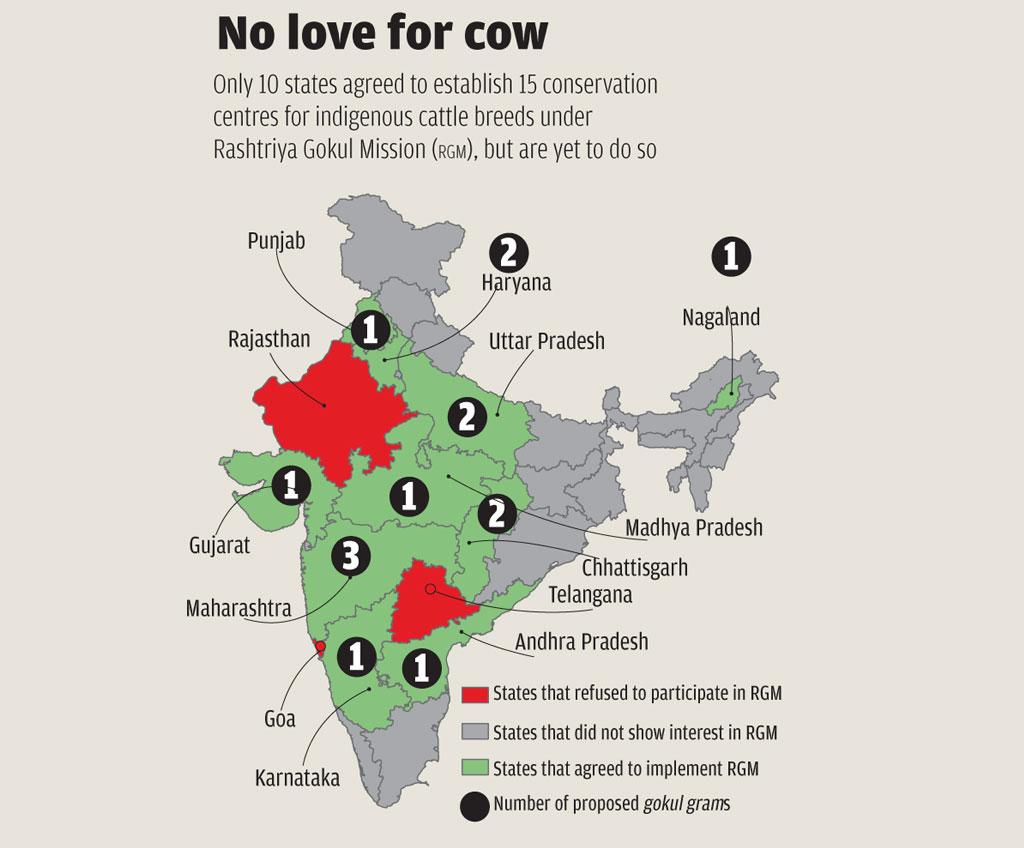 In Gujarat, touted as the model state for cattle conservation, the government has allotted 350 ha for RGM. Yet it is struggling to set up a gokul gram.

Other states are not as lucky, and are grappling with land acquisition. Consider Telangana. “A non-profit has been asked to set up gokul gram without any consulta tion with the department,” says Suresh Chand, principal secretary, animal husbandry department of the state. “The non-profit now asks us to provide 20 ha, but we do not have guidelines for this.”

At the risk of getting derailed

Agricultural scientists say the scheme has long been overdue. The first such initiative was started in the 1960s. “It failed in the absence of technology,” says N K Khurana, secretary, Haryana Livestock Board. So the country adopted the path of crossbreeding with foreign breeds. While the crossbred cattle yield more milk, they are not as robust and resilient to diseases and extreme climate stress as native breeds, says Khurana, who is hopeful of RGM’s success.

“The conservation process should have started 30 years ago. We have lost many indigenous cattle because of the inordinate delay,” says M T Manjunath, additional director, animal health, Karnataka.

But experts are wary of some provisions of the scheme. One such provision requires gokul grams to keep 60 per cent of productive cattle along with 40 per cent of stray cattle. “This is risky as the productive animals could contract diseases from stray cattle,” says Nagar, who suggests that bio-security measures should be considered while planning gokul grams.

J P Singh, deputy director, Uttar Pradesh (UP) Livestock Development Board, cites another problem. He says the centres have not been planned keeping native tracts of the breeds in mind. UP, for instance has four breeds—Haryana, native to western UP, Sahiwal, native to Barabanki, Tharparker, native to Bundelkhand, and Ganga Tiri, native to eastern UP. But the state has been allotted only two centres, one each in Mathura and Varanasi. Singh says the state government should urgently plan a centre for Tharparker variety as people in Bundelkhand are abandoning their cattle following consecutive droughts.

In UP, officials who are procuring cattle of a high genetic merit face a stumbling block: owners are unwilling to part with their elite cattle. In other places, officials are looking for ways to reclaim community grazing land in villages as the scheme is silent about it.

Kamal Kishore, a livestock expert based in Himachal Pradesh, has a different fear. He says in the absence of proper guidelines, officials may crossbreed indigenous varieties, for instance Ganga Tiri, indigenous to Varanasi, with Gir from Gujarat, instead of improving the genetic makeup of a particular breed. “By doing this, they will create nothing but a zoo,” says Kishore, adding the government should ensure the gokul grams are established in the native breeding tracts.

Unless the Centre addresses these issues, merely renaming a scheme will not solve the purpose.

The article has been taken from the 1-15 September, 2016 edition of Down To Earth