What's forcing the weaver community of Varanasi to abandon their profession, end their lives? 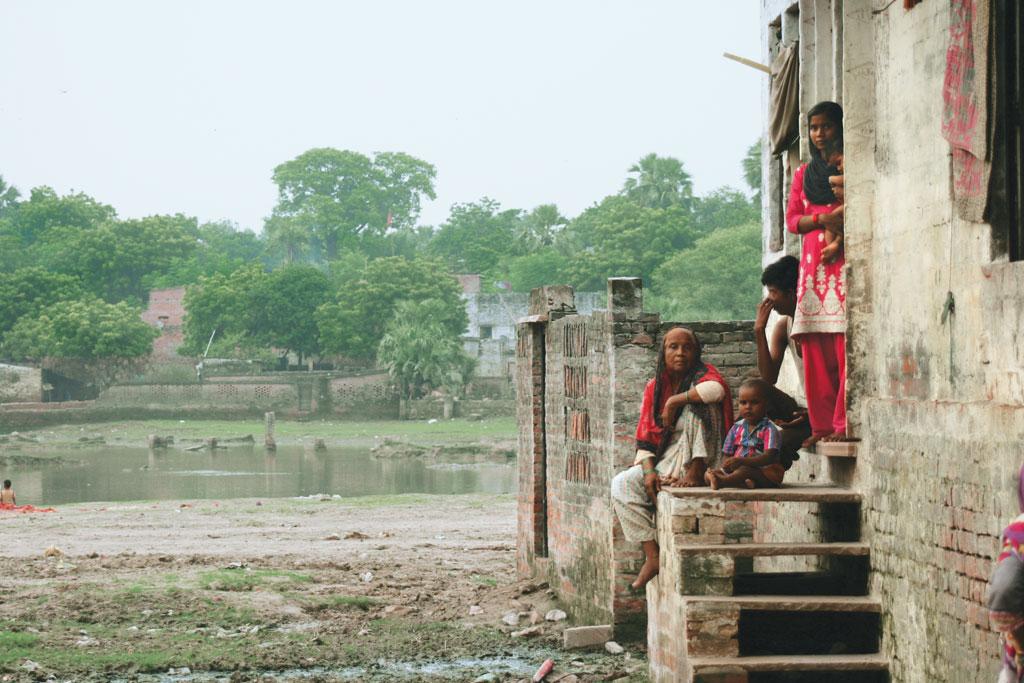 Saima Bibi (left) has mastered the art of weaving a Banarasi silk sari in handloom. These days she works as a cleaner at a madrasa to earn a living

Saima Bibi, a resident of Varanasi’s Nakki Ghat, has mastered the 500- year-old craft of making intricate motifs and fine zari works on silk saris using a handloom. But these days the 60-year-old works as a cleaner at the nearby madrasa to earn a living. “I abandoned my handloom 12 years ago,” she says. Her neighbour Miraz Ahmed owns a power loom. Yet, he struggles to make ends meet. When this reporter asked Ahmed what can be done to improve the lives of Banarasi silk sari weavers, he said in a huff, “What good will your article and pictures bring?” Ahmed’s anguish stems from the fact that even though several government bodies have in the past acknowledged the problems faced by Varanasi’s weavers, they have done little to safeguard their interests. And today, the world famous sari is losing patronage among its own weavers.

Artisans are migrating to other cities to do menial jobs at textile factories. Some have even quit the trade. The situation has particularly aggravated in the past 10-15 years since the influx of Chinese silk products, which have reduced the demand for Indian silk. In the absence of latest data, weavers associations say the district is now left with just 200,000-odd Banarasi silk sari weavers, compared to 500,000 a decade ago; handloom weavers form only five per cent of the community.

“The condition of the weaving community is no different from that of marginal farmers in the country,” says M Mohana Rao of Rashtra Cheneta Jana Samakhya (RCJS), a trade union that works for weavers’ rights. “Since 2010, at least 50 weavers have committed suicide in Varanasi,” adds Rao. Weavers’ unions allege that abject poverty and lack of government support are driving the custodians of this rich tradition to take such extreme steps.

“The condition of most weavers in Varanasi has deteriorated due to the lowering of wages and increasing health problems,” says Lenin Raghuvanshi, who heads Peoples’ Vigilance Committee on Human Rights (PVCHR), a non-profit.

For instance, weavers who work at power loom factories earn about Rs 125 a day—this is Rs 225 less than the daily wage rate fixed by the Union Ministry of Labour and Employment, but the highest amount a weaver can earn in Varanasi. The wages are meagre even for those engaged in the highly-specialised handloom weaving. The last Handloom Census released in 2009-2010 shows that an average handloom weaver household of five persons earns Rs 36,498 a year. Given that almost all the members of a weaver’s family work on a sari, each artisan earns Rs 22 a day, shows a calculation by RCJS. 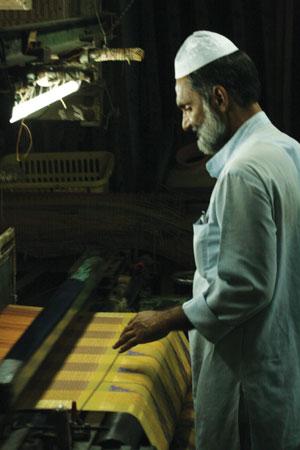 “Women’s contribution in a Banarasi silk sari remains highly unrecognised,” says Mohammad Ahmed Ansari, a power loom owner. “They play a major role in cutting the yarns and in making the bead (naka tiki) and embroidery (zardozi) works, but hardly get paid as the task is considered a household chore done during free time,” he adds.

The intricate designs, which require the artisans to sit for long hours and work in a dimlit atmosphere filled with dust from fabrics, have taken a toll on their health. An October 2014 draft consultation paper on handlooms of the earstwhile Planning Commission acknowledges this. “Body pain, pulmonary problems, chronic bronchitis, decrease in hand-grip strength are observed in weavers. About 94 per cent of weavers with 10-30 years of work experience report pain in the knee, back and neck. Poor eyesight is also a serious problem among them,” notes the consultation paper. But such observations have not helped to raise their living standards.

The weavers allege that Prime Minister Narendra Modi, who won from Varanasi in the last Lok Sabha elections, has done little to alleviate their plight. For instance, in 2012 weavers in Varanasi started receiving insurance benefits for ill health and untimely death or disability. But the benefit amounts have reduced over the past years, say weavers associations. This is evident from the reducing budgetary allocation for the Health Insurance Scheme and the Mahatma Gandhi Bunkar Bima Yojana (MGBBY) despite a substantial increase in the number of beneficiaries under them. The budget for the Health Insurance Scheme has reduced from Rs 109.64 crore in 2012-13 to Rs 25.87 crore in 2014-15, and that for MGBBY from Rs 17.16 crore to Rs 16.39 crore during the period.

Worse, most weavers in Varanasi remain outside the ambit of these schemes. The insurance schemes and welfare progra mmes of the Union government’s Depart ment of Handloom are meant for those weavers who have formed a cooperative. Only five per cent of the district’s weaver community fall in this category. While weavers outside the cooperative can avail the benefits, they have to obtain recognition certificates from the State Directorate of Handloom in Lucknow. Travelling to the capital city to obtain a certificate is an impossible task for most weavers who toil to make ends meet.

The government apathy towards the weavers can also be gauged from the fact that the Department of Handloom spends little money on their welfare. RTI replies received by RCJS shows that the department received Rs 1.93 crore in 2015-16 for the welfare programmes of weaver, but spent only 0.23 per cent of the funds under the head of “professional services”. The remaining was spent on salaries, dearness allowances, travel and medical allowances for the staff.

To worsen their condition, every year about 15,000 weavers, living in the low-lying areas of Nakki Ghat and Chauka Ghat, get affected by the floods in the Varuna, a tributary of the Ganga. Ahmed says he had to spend Rs 50,000 on the repairing of his power loom that got inundated during the flood this year.

The influx of Chinese silk products into the Indian market was the last straw.

“The government provides subsidies for imported Chinese silk products, which is eating the market share of Indian silk,” says Ansari. He adds that there is a demand for the raw silk imported from China as it is better to work with. “Currently, we have to pay 15 per cent import duty on the raw materials and just 10 per cent duty on silk products from China,” says Ansari. The share of Chinese silk products in Indian market today is $450 million. At the same time, India’s silk exports reached a record low in 2016 at $16.99 million, from $392.43 million in 2005.

Of late, Varanasi has been witnessing a new culture: the widening influence of gaddidar or broker. Idris Ansari, a weaver from Lallapura area, says Varanasi had four markets—Chowk, Lohta, Peeli Kothi and Bajardiha. While Peeli Kothi dealt mainly with pure silk saris, the others traded in silk as well as synthetic and cotton saris. “We had direct access to these markets where we would meet the buyers, get a sense of the designs they like weave, and sell our products,” says Idris. But these days the gaddidar coordinates with the buyers, decides the design and thereby controls the market. They also provide capital to poor weavers for buying yarns and other raw materials, he says, adding that 500-600 gaddidars control the entire trade in Varanasi. Last year, Idris had to sell off his handloom machine after he failed to repay his loan to a gaddidar.

Mohammad Azmal Ansari, probably one of the last handloom weavers in Lallapura, explains how a weaver gets exploited at the hands of a gaddidar. Making a sari costs about Rs 3,400 and takes 10-15 days. “I will earn Rs 250 per sari as I am working on a design provided by a gaddidar. Had I used my own design and yarn, I would have earned three-four times more,” he says.

Weavers get exploited because they depend on the gaddidar for the sale and marketing silk fabrics, says Raghuvanshi. To help them gain a foothold in the market, the government-run Indian Institute of Handloom Technology (IIHT) has a centre at Chauka Ghat in Varanasi. The centre can train 500 weavers a year in marketing and product promotion. But the training programme was attended by just 340 weavers in 2014-15, and by 200 weavers this year, says S K Malik, chief manager (commerce), IIHT.

Historically, says Raghuvanshi, sari making as a craft flourished in Varanasi due to the humid weather on the banks of the Ganga, considered ideal for working on silk. “The trade prospered as a result of the syncretic tradition between the Hindus and Muslims. Hindus traded the saris, while Muslims weaved them,” he adds. Post Independence, the trade shifted from the rich to poorer communities, such as the Dalits, and the scope of the exploitation increased.

While activists like Rao and Raghuvanshi still believe a positive intervention by the Union textiles ministry can help save the sector, most weavers say they will be obliterated if they have to depend on the gaddidars. “I am educating my grandchildren so that they can negotiate well for our community with the brokers. For years, they took advantage of our illiteracy and that needs to be fixed urgently,” says Bibi.

The story has been published in the November 1-15, 2016 issue of Down To Earth magazine.