Landholding can affect marital prospects. It can also affect sex ratios and lead to polyandry. A village in Alwar provides a snapshot 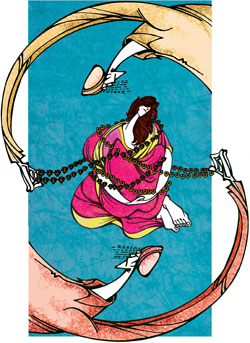 Mankhera is a small village located about 66 km from Alwar, Rajasthan. Its population comprises mainly the jat community with only a handful of brahmin and dalit (mainly chamar and balmiki) households. We were in Mankhera to study the agrarian crisis that has gripped India, and conducted two surveys-in June 2007 and in June 2013. But we stumbled upon unusual social patterns during our surveys-female infanticide and polyandry. However, what was most striking was the link between land-holding and marriage.

One may find it difficult to connect these two dots, but as the story of Mankhera village unfolds, the relationship becomes clear and alarming. Mankhera has a falling sex ratio. The sex ratios of dalits, brahmins and OBCs were 876, 865 and 813 (females per 1000 males) respectively in 2013. The jat community, comprising 60 per cent of the population, is mostly involved in agricultural activity on ancestral property. Besides the jats, the brahmins, too, own land, though they are not solely dependent on agriculture despite having the highest average landholding. Most dalits are completely landless. The average landholdings, too, are small and highly fragmented: brahmins own 1.4 hectares (ha) of land, dalits 2 ha and OBCs, mostly jats, about 1 ha. Division of land through many generations is cited as the reason behind falling per capita landholding and high fragmentation.

Owing to small landholdings, many males are unmarried. In 2013, there were about 8.1 per cent households with at least one unmarried male member, up from 5.7 per cent such households in 2007. Emerging trends show that if there are two brothers in the family with very small landholding, then the family voluntarily does not marry one child. In other words, one child “sacrifices” his marital life to stop further division of the family land, paving the way for the other brother to get married in wealthy families and with dowry. Surprisingly, no female more than 19 years of age was unmarried.

The “sacrificial” theory does not hold water if confessions of a bold household are to be believed. In reality, it is the informal arrangement of sharing the wife between the two brothers. The household further disclosed that this has become the accepted norm, unofficially, and is now an “open secret” in the village. As polyandry doesn’t have any legal backing, reliable data cannot be obtained as is the case in female foeticide, female infanticide and early marriage. This trend was most prevalent among those agricultural communities for whom land is the only means of production. However, the trend was comparatively less prevalent among dalits and brahmins.

During our survey in 2013, six years after the first one, we found that the number of unmarried males above the age of 28 had increased to 12. Unmarried males counted in 2007 were still unmarried. Additionally, five new unmarried males had entered the loop. The division of land has had a cumulative effect.

On the one hand, it has become an uneconomic proposition, and on the other, it signalled poverty or incapacity to run a family. Empirical data on polyandry was not possible to obtain from households as it was a matter of family pride and because of the illegality it carries. We realised the issue of polyandry was not just related to small landholding, but also related to the pride of the community. For instance, members of the landlord caste never work as labourers, and the belief is that a small family with consolidated landholding is a better option. Members of the agricultural communities, too, neither want to work as labourers nor are they educated, like brahmins, to get alternative work. It is the high dependence on land and the pride associated with it, along with falling sex ratio, that have encouraged the practice of polyandry. This harsh reality of Mankhera is becoming more pronounced by the day.

While surveying in a very cooperative jat household, we filled the details of a baby girl (just 17 days old) along with other family members. Few minutes later, her grandmother requested us very politely to delete the information related to the girl. Initially, we could not understand the reason. We do not wish to speculate without hard evidence on female infanticide in this case.

The survey also found that land inequality had increased, both inter-caste and intra-caste. The unpredictable monsoon, depleting water levels, unproductive landholding and uncertainty, especially in the prices of guar crop, had shifted the tenancy pattern from fixed rent to shared crop. The purpose of our survey was to understand the agrarian crisis, but we learnt about polyandry and female infanticide.