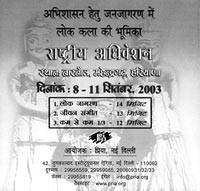 This cd-rom released by New Delhi-based Participatory Research In Asia comprises three short-length Hindi films: Lok Jagran, Jeevan Sangeet, Kam se Kam 1/3. The first two films are based on a national convention held in Narnol, Mahendragarh in Haryana from September 8-11, 2003, while the third one is about women's role in panchayats. The national convention brought together over 200 folk artists from 12 states all over the country.

Information is the first step towards people's empowerment but there are different ways to convey it. The films tell you that folk art can be effectively used to disseminate information in native language. A popular form, it can ensure people's participation to a greater degree than any other method. Another advantage is that songs, dances, theatre and puppet shows can take social and political messages to places where other communication means cannot.