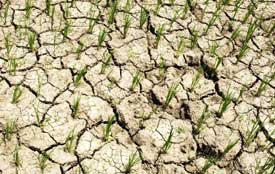 scientists claim to have solved the mystery of links between El Nino and monsoons in India, a development that can lead to more accurate weather forecasts. This was published online in Science's portal on September 7, 2006. El Nino, which means 'the little boy' in Spanish, is an abnormal warming of the Pacific Ocean. Normally, the temperature of surface water in the western Pacific Ocean is 6-8 c higher than in the eastern Pacific Ocean. But during El Nino, this reverses, changing the atmospheric pressure on either side of the ocean.

An analysis of rainfall records of the past 132 years has revealed that severe droughts in the country have always been accompanied by El Nino events, but not all such weather conditions have led to the failure of monsoons (see table: Definite link). The El Nino events in 1965, 1972, 1982 and 1987 were bad for India but the 1997 El Nino, despite being the strongest in the century, did not affect monsoons. This led many experts to conclude that the link between monsoons and global weather event was wearing off. But the India Meteorological Department still takes into account El Nino for forecasts. 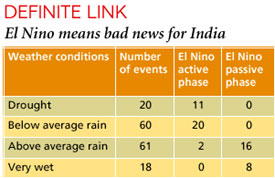 According to the scientists, India gets affected when warm Pacific temperatures typical of El Nino extend westwards into the central Pacific Ocean "We show that El Nino events with warmest sea surface temperature anomalies in central equatorial Pacific are more effective in focusing drought-producing subsidence over India than events with warmest sea surface temperature in eastern equatorial Pacific," says K Krishna Kumar of the Pune-based Indian Institute of Tropical Meteorology.

For their research, the authors examined 23 strong El Nino years for atmosphere and ocean conditions that distinguish 10 Indian monsoon droughts from the 13 drought-free years. They found that whenever monsoons failed, the sea surface temperature was high in the central Pacific Ocean The authors also noted that the question of whether this connection will change as a consequence of global warming will continue to be investigated. According to them, the results of this study indicate that human-induced ocean awarming could have material consequences for the monsoon intensity over India.