El Nino may lead to rainfall deficit, drought in 2014

Chances of the ocean warming phenomenon getting stronger are 30 per cent, suggests forecasting company 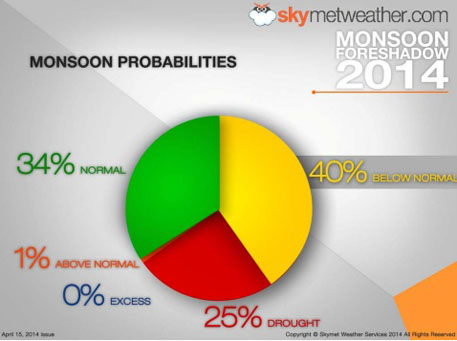 India will receive 94 per cent of normal rains and all four months of the rainy season (June to September) will individually also receive less rain.

The “little child” at work again

The agency has blamed the El-Nino effect or the warm ocean water temperatures that develop every three to five years off the Pacific Coast in South America for the deficit in rainfall. "Among all the parameters, El-Nino has maximum correlation with rainfall in India. We use data made available by various international agencies to foresee pattern of rainfall in a year. But El-Nino is an important part of our method," said D R Sikka, former director, Indian Institute of Tropical Meteorology, Pune, who is with Skymet now.

According to the predictions made for the June-September rainy season, June and September will receive 90 per cent of the long period average rainfall, which is considered normal, July will get 94 per cent of the normal and August will get 98 per cent of it. In terms of geographical risk, Skymet suggests that northwest and west-central India will receive least rains. These regions include Rajasthan, Gujarat, Punjab, Haryana, Madhya Pradesh, Chhattisgarh, Vidarbha, Goa, parts of Karnataka and the new state of Telangana. Peninsular India will be at less risk in the rainy season. 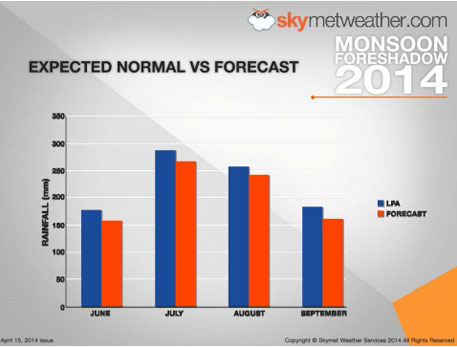 ‘Foreshadow, not a forecast’

Experts at Skymet prefer to call this foreshadow, rather than forecast.  "There is an amount of certainty attached with forecast. But foreshadow is more uncertain. At this juncture, the actual amount of rainfall that India will receive is very uncertain to predict," said Jatin Singh, CEO, Skymet. Sikka said it is difficult to predict whether El-Nino will amplify or decrease the rainfall and that for this reason the level of uncertainty is high. The chances of El-Nino getting stronger are 30 per cent, according to the data.

The data shows that monsoon may halt, or move slower than normal, twice in the month of June. "This means there can be heavy showers at some places, but monsoon can slow down in covering the entire country," added Sikka.