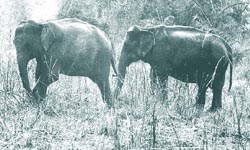 a survey conducted by the ministry of environment and forests has identified major elephant corridors in the country.

The survey was the need of the hour because elephants were not being able to move from one area to another for food and mating due to lack of corridors. S C Sharma, additional inspector-general of forests (wildlife), says, "For instance, the elephants cannot cross over from east to west of the Ganges near Hardwar and Rishikesh as elephant corridors are disappearing fast."

The animals cannot move to Ram Ganga as hotels separate one area of the forest from the other. A similar situation exists in the northeastern states where there are 7,000-8,000 elephants.

The situation is worse in Orissa. The Simplipal corridor is threatened by the Boula chromite mines whereas the national highway has affected elephant movement in the Satsokia corridor.

Meanwhile, the Union government is also working with the Bhutanese government to reestablish a corridor linking the forests in the two countries.