Proposals have been mooted to save endangered species by curbing their culling and trade. But the fate of African elephants still hangs by the nose 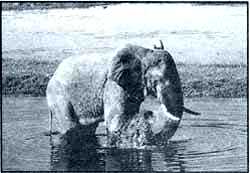 CONSERVATION authorities from 126 nations are sorting out differences over which endangered flora and fauna need protection, and the modus operandi at the ninth meeting of the Convention of International Trade in Endangered Species (cites), in Fort Lauderdale, Florida.

The conference, attended by officials, representatives of conservation organisations and traders, has been framing international trade laws for endangered species since 1976. This year's meet, which began on November 7, would decide the future of mahogany, whales, pangolins, hippos, antelopes, kiwis and crocodiles among other species. But downlisting African elephants from Appendix i, which bans trade in elephant products, to Appendix ii, which allows controlled trade, would be heatedly debated.
Trade in elephant products was banned when a resolution of the Seventh meeting of the Conference of Parties to the cites in Laussane, Switzerland, in 1989, placed African elephants in Appendix i. But at the 1992 cites meeting in Kyoto, Japan, some Western industrialised nations insisted that ivory ban had reduced elephant poaching, while some African wildlife managers demanded controlled culling.

South Africa came this year with a controversial proposal, which it later withdrew. It wanted to be allowed to trade in elephant meat and hide, although agreeing to implement the ivory ban. Vivek Menon of Trade Record Analysis of Flora and Fauna in Commerce (TRAFFIC), regarded this a move to win the international community's goodwill. The us, sceptical of the proposal, said there would be no markets for meat and hide. The us interior secretary Bruce Babbitt, affirming that the Clinton administration would oppose relaxation of ivory ban, observed, "The real question in the mind of the us is, whether it is in fact possible to open trade in hide and meat without compromising the ivory ban." In the face of this opposition, the proposal was withdrawn. Earlier, 4 African countries -- Botswana, Malawi, Namibia and Zimbabwe -- had threatened "to defy the cites altogether and sell their ivory to their elephant parks" if the South African proposal was cold shouldered. The United Nations Environment Programme (unep) agreed to be an intermediary for developing a unified approach to the elephant conservation issue.

CITES had recieved 120 proposals this year to include 200 species in its appendices. India's ministry of environment and forests delegation is representing the cause of 17 endangered plant species. At the meeting, a cites study recommended numerical criteria for listing species, which was dismissed. It said: for a specie to be listed in Appendix i, its population should be less than 5,000, distributed over less than 1579.5 sq km; or a declining population rate of 50 per cent over 5 years, or 2 generations of any specie. But, applying numerical guidelines to all species equally would not generate adequate data.

However, better enforcement with an emphasis on border checks, undercover operations and enforcement officers would be demanded. Ghana has proposed a law enforcement network encouraging accords similar to the September 1994 Lusaka Agreement on Cooperative Wildlife Enforcement.

More national legislation to implement the cites would also be emphasised upon. A recent cites study revealed that of the 81 countries with "high levels" of endangered species, only 15 have adequate legislation to support the cites. Said World Wildlife Fund director general, Claude Martin, "The cites cannot work to protect species in trade without the political will and backing of its members."

The convention could be the deciding ground of future strategy -- sustainable use or total protection. Elizabeth Dowdeswell, executive director of the unep, sounded a note of caution at the conference: "Local communities need to be more involved in the management of biological resources and to benefit from their sustenance. If this point is missed or weakened, I am afraid we are going to lose support of the majority of people who inhabit the poor and developing countries,... also the home of the cites-listed species."