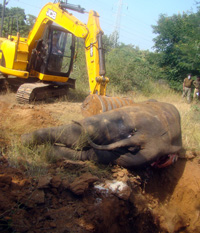 Five elephants, including a calf, were mowed down by a speeding Howrah-Chennai Coromandel Express near Rambha railway station in Ganjam district of Odisha soon after midnight of Saturday. The accident is a grim reminder of how unsafe the animal is in Odisha. In a five-year span, more than 300 elephants have perished in the state, and the majority died unnatural deaths because of poaching, poisoning and deliberate electrocution.

The elephant herd mowed down during the weekend comprised one tusker, three female elephants and a calf. They were crossing the railway track at the time of the incident. The impact of the collision was so severe that a mature foetus was pushed out of the womb of a female elephant. Carcasses of the jumbos were found scattered over half a kilometre stretch from the accident site.

Incidentally, the elephant herd was traversing in its own corridor. The fatal accident was attributed to lack of coordination between forest department of Odisha and the East Coast Railway. Soon after the accident, both organisations tried to absolve themselves of the guilt.

It turns out that the train was moving at a speed of nearly 100 km per hour, although Indian Railways itself has put up at least 10 display boards, indicating it as elephant corridor.

The wildlife wing of forest department might claim to have informed railway authorities about 15 minutes before the accident, but the alert should have been sounded at least 24 hours before that; field level officials had been tracking elephant movements in the region for a couple of days prior to the accident.

A few months ago, the wildlife wing had convened meetings with energy department and East Coast Railway for forging proper coordination in bringing down rate of elephant casualties. A mutually agreed strategy in the light of guideline of the Union Ministry of Environment and Forests was finalised. However, the action plan was not implemented in the ground.

Since 2008-09, a high number of elephant deaths has been reported every year (see table). Poachers have become bolder by venturing into protected zones, which is a major cause of concern. Of the 310 elephant deaths reported, only 116 elephants died of natural causes or diseases.

The state government has admitted that 26 elephants had been poached by armed criminals, 16 jumbos were poisoned to death and 29 succumbed to deliberate electrocution. Altogether, 71 elephants had been targeted by hunters in Odisha in the past five years. It accounted more than 50 per cent of elephants poached in the country since 2008. According to a study of Wildlife Protection Society of India (WSPI), 120 elephants have been poached between 2008 and 2011.

Elephants are not even safe in national parks. More than 30 deaths have been recorded in Similipal National Park area since 2009. The forest department should have been more caution in managing the park after huge hue and cry was made over 12 elephant deaths in the park in 2010, say activists. However, no visible improvement has been noticed since then.

“There is an ongoing merciless slaughter of elephants all across the state by poachers, deliberate electrocution and irresponsible power companies. Sagging power lines left unattended have taken a heavy toll of elephants in the state. These deaths were entirely avoidable,” says Biswajit Mohanty, a wildlife activist.

“We are truly shocked to see the present status of the National Heritage Animal in our state since the forest department has miserably failed to provide it adequate protection,” says Mohanty who happens to be a member of National Board for Wildlife. “The government had issued a circular last year that accountability would be fixed on divisional forest officers and range officers for elephant killings in their areas which is yet to be implemented. An average of six to seven elephants die every month out of which three to four are killed by poachers or by electrocution,” he adds.

Besides, not a single high-ranking official in the power distribution company had been held responsible for accidental electrocution deaths. Since 2008, 32 elephants lost lives after bumping into sagging live electric wires.

During the past one decade, due to frenzied mineral extraction activities and infrastructure development, elephant population, which was confined to a few districts, has spread out. Elephant habitat depredation has been reported 26 out of 30 districts of the state. Keonjhar, one of the most intensely mined districts of the country, had a sizeable number of elephants. After mining activities and increased train movements, the elephant population has been dispersed. A train passes through critical forest area of Keonjhar, every 13 minutes.

According elephant census-2012, Odisha has a population of 1,930 elephants. However, the big mammals are under tremendous pressure to stay confined to their old habitats and migrate along in traditional corridors. Development projects and increase in human habitation have taken over the elephant corridor.

As many as 14 major corridors had been identified for linking elephants’ habitats. However, the plan to conserve them is a tough challenge. Several corridors have been irreparably damaged. The plan to bring together fragmented patches of corridors faced hurdles like land acquisition and convincing people to give space to the national heritage animal.

Besides, the state government is also accused of being negligent in taking strong measures to protect the animal. Mohanty, who was a member of probe team that investigated death of 12 elephants in Similipal National Park in 2010, says, “the team had put forward several recommendations to check elephant deaths in the highly protected area. Recommendations such as raising protection force, strengthening intelligence network and working in close coordination with local people were not implemented. Moreover, field director of the national park was suggested to spend at least seven nights in a month in the park. It was not followed.”