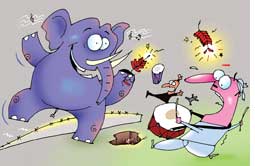 Maharashtra, Karnataka slug it out over six animals

SIX wild elephants in Maharashtra have braved it all--firecrackers, drums, burning torches and chilli powder. But they won't leave their home for anything in the world. The elephants belong to the Dandeli forest in Karnataka. They crossed borders in 2002 and have been living in Maharashtra ever since. The state's forest department has used every ploy possible to drive the elephants back to their home in Belgaum district in Karnataka, but to little avail.

Twenty elephants had migrated in 2002. Fourteen returned the following year, but the remaining six decided they liked their new environment better and chose to stay on. Now, after seven years, Maharashtra has come up with a new idea, which it implemented from January 10--to tranquillize the elephants and transport them to the border in large trucks.


"The elephants would be tranquillized and released about 150 metres from the Karnataka border," said N Zurmure, deputy conservator of forest (Sawantwadi), Sindhudurg in Maharashtra. He said deep trenches had been dug and a concrete wall, electric fences and iron gates had been erected along the border to ensure the released elephants stayed within limit.

The trouble started when a team of experts tranquilized a 35-year-old female elephant and she died the next day. There was a stir, but Zurmure dismissed allegations of drug overdose. "The post mortem report said she died of pneumonia and diarrhoea," said Zurmure.

On January 28, the team succeeded in hitting two more elephants with tranquillizer darts--an adult and a four-year-old calf. The baby was captured and released near Sada border in Belgaum district. The adult elephant managed to run away and is reported to be touring North Goa. The calf after roaming around Belgaum for a couple of days returned to Sawantwadi on February 2 in search of its parents.

"I went to see the baby elephant after I got to know that it was released in Belgaum. The villagers told me they saw the calf running back to Maharashtra," said Girish Hossur, deputy conservator of forest for Belgaum. "The calf had to negotiate a precipitous incline to get back to Maharashtra. This shows how desperate it was to rejoin its herd." The Maharashtra forest department officials should not try to create artificial barriers and ought to allow elephants to move freely through the Western Ghats, he added. But Zurmure maintained the calf was still in Karnataka.

The relocation project made some more headway on January 30 when a fourth elephant was tranquillized. But it got injured and has been left alone for the time being. The project is in its last phase as the team is trying to track down the two remaining trespassers.


To restrict elephant movement, Maharashtra forest department had earlier dug trenches along the Karnataka border little realizing they were blocking the re-entry of the herd into Karnataka (See Down To Earth, June 1-15, 2008). Hossur was happy about it. "The trenches have proved beneficial to us as the compensation paid against destruction caused by elephants has come down from Rs 20 lakh to one lakh per year," said Hossur.

The Maharashtra forest officials blamed the Karnataka government for not maintaining their forest cover. "Illegal mining and infrastructure have destroyed elephant habitat in Karnataka forcing the animals to move to south Maharashtra," an official said.

Wildlife experts don't see a solution in such practices. "The solution to the present conflict does not lie in tranquillizing the elephants and throwing them into no-man's land, but in creating a natural habitat so that they have enough food and water," said Mike Pandey of New Delhi based Earth Matters Foundation.

Maharashtra government's elephant village project that would have addressed this problem has not seen the light of day.