*CORRECTION: This story was published on January 5, 2021. The third, fourth and fifth paragraphs have been rephrased to give a more accurate version of how CSE conducted the analysis for the study.

Thermal power purchased by West Bengal was generated from the most polluting plants in India, the Centre for Science and Environment (CSE) has found.

Most coal-based thermal power plants (TPPs) supplying to the state had not taken measures to control sulphur dioxide (SO2) emissions, the Delhi-based non-profit found.

CSE researchers have considered the progress made by power stations to meet only the SO2 norms as a measuring scale to identify the dirtiest power. This is because limits on oxides of nitrogen have already been watered down and particulate matter norms do not demand much changes in the system.

It is the compliance with SO2 norms that has remained a daunting challenge which cannot be delayed. There is strong pressure to dilute SO2 norms already.

The Union Ministry of Environment, Forest and Climate Change (MoEF&CC) had stipulated norms to control particulate matter, SO2 and oxides of nitrogen in December 2015. However, the Union Ministry of Power is seeking further relaxation of the SO2 norms.

Additionally, the CSE study has benchmarked the electricity procurement by states from different power plants to see if cleaner power is being procured. This is important as bottom up pressure and demand for cleaner electricity from states can be an important catalyst to accelerate quicker transition to cleaner power without derailing time-bound implementation of the new norms. This is needed under the National Clean Air Programme.

Those that were in the stage of tendering were categorised as ‘orange’ while those with no plans as yet were labelled ‘red’. The ‘orange’ and ‘red’ category were together categorised as ‘unclean stations’.

“It takes two years to install equipment to control sulphur dioxide emissions after awarding tenders for it. Therefore, it is very unlikely for plants mentioned in the ‘orange’ category and almost impossible for plants in the ‘red’ category to meet the norms by 2022,” Sugandha Arora, programme officer, Industry Pollution Unit, CSE, said.

CSE, in its study, ranked states and Union territories (UTs) based on the percentage tie-up they had with unclean coal power capacity. Thirty-three states procured electricity from coal-based power plants in India.

These states had tie-ups with various coal-firing power generators. CSE accessed data for 162,091-megawatt (MW) capacity from the Union Ministry of Power’s website and made assessed as to how clean these power companies were.

The non-profit found that on average, tie-ups with cleaner coal power stations had only been 42 per cent. Nine states had tie-ups more than this average.

West Bengal was ranked at the bottom of this list, with just 16 per cent clean power procurement. Interestingly, West Bengal generates all the electricity it needs through power stations within its borders. Hence, the regulatory authority in the state has necessary powers to reduce pollution.

These states have tie-ups largely with unclean coal TPPs 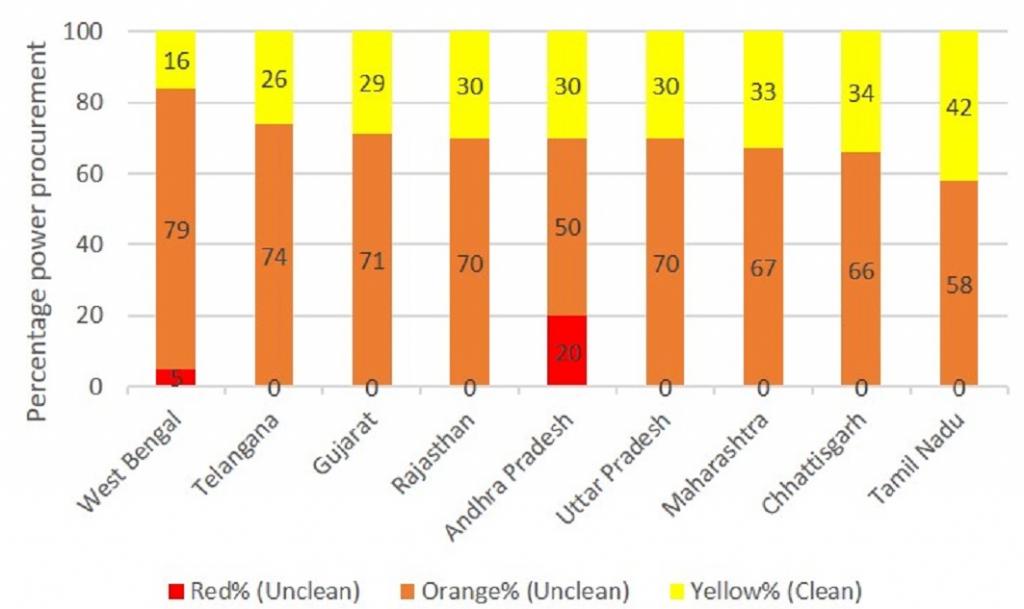 Power stations such as those at Budge Budge, Durgapur, Haldia, Sagardighi, Santaldih, Lal Bazar, Titagarh and Bakreshwar had not made adequate progress to comply with the emission norms, the study said.

Most stations located in and supplying power to Gujarat such as Mundra, Akrimkota, Ahmedabad, Pandara, Ukai, Surat and Wanakbori had done very less to meet the norms.

The Chelpur, Kothagudem, Ramagundam and Singareni stations located in Telangana, Marwa located in Chhattisgarh, the Neyveli located in Tamil Nadu as well as Nellore in Andhra Pradesh, both of which supply power to Telangana, had not complied with the norms.

Telangana had the dual accountability of cleaning up both its own stations and ensuring stations supplying it were clean while Gujarat needed to clean up the stations in its own boundary, like West Bengal, the study said.

Around 72 cities of the 122 non-attainment cities in India were in these nine states that cared less about implementing the emission norms in coal-based TPPs, the study noted.

Non-attainment cities have very high particulate matter levels in the ambient air than what is advised for a healthy environment. The impacts of coal-based thermal power stations are felt up to within 300 km of their radius according to scientific studies.

Coal is a polluting fuel. Power plants irrespective of whether they are in the limits of the non-attainment city or not, if they fall in the 300 km radius of non-attainment cities, must meet the norms on priority. Authorities must work in coherence and region-specific action plans need to be developed. It is a health emergency

The issue of non-compliance could hit Maharashtra, Chhattisgarh and Uttar Pradesh hard as the non-complying thermal power plants were located in clusters in these states, the study said.

All power stations in the Koradi belt supplying power to Maharashtra — Tiroda, Bhusawal, Chandrapur, EMCO, Khaperkheda, Koradi, Amaravati, Nashik, Nagpur except NTPC Mouda — had not taken adequate steps to comply with the norms.

Apart from this, Maharashtra was sourcing unclean power from CGPL Mundra, located in Gujarat.

Similarly, in UP, most of the state and private sector stations in the Singrauli belt — Lanco Anpara C, Obra — had not met the norms. In addition, other stations located in and supplying power to UP — Bara, Tanda, Shahjahanpur, Harduganj, Parichha, Lalitpur — were also in default.

UP was sourcing unclean power from Madhya Pradesh’s Anuppur, Maharashtra’s Dhariwal and Chhattisgarh’s Raigarh and Nawaparatenda.

Only thirteen states / UTs out of the 33 were procuring 100 per cent of their requirements from clean coal-based power stations. These included Arunachal Pradesh, Assam, Chandigarh, Damman and Diu, Himachal Pradesh, Jammu and Kashmir, Jharkhand, Manipur, Meghalaya, Mizoram, Nagaland, Sikkim and Tripura.

Delhi and Goa were also very close in terms of procuring the cleanest energy, with only 5-8 per cent of their power coming from unclean sources.

The rest of the states procured clean coal power in the range of 51-80 per cent. State-run and private-run stations were emerging as defaulters.