On April 5, 2020, India conducted yet another unprecedented collective behavioral experiment on the directions of Prime Minister Narendra Modi. All households across the city switched off domestic lights at 9 pm in solidarity towards nation’s fight against the novel coronavirus disease (COVID-19) pandemic.

The experiment managed to reduce the national power load on the grid — it fell by 31,089 megawatt (MW) , according to the preliminary report released by the Power System Operation Corp Ltd.

The medical, social, political, and societal implications of this latest exercise by the PM are up for debate, but here is a granular look at the energy and pollution impact of it on Delhi.

The demand went back to its normal cycle by 9:45 pm. This 751 MW drop may seem incredible in current lockdown and spring conditions, but is relatively small if compared to regular times. On March 31, 2019, the demand load on the city grid was about 3,000 MW.

The exercise has been useful to get a good understanding of domestic lighting and its impact on country’s electricity demand. It can help us better understand the operational energy efficiency impact of government schemes such as Bachat Lamp Yojana.

So far all the energy saving claims of the scheme is based on assumption that each new LED lamp is replacing an incandescent lamp, but there has not been any large scale survey as to how people are using these LED lamps in real life. Now we have some benchmark to
work with. 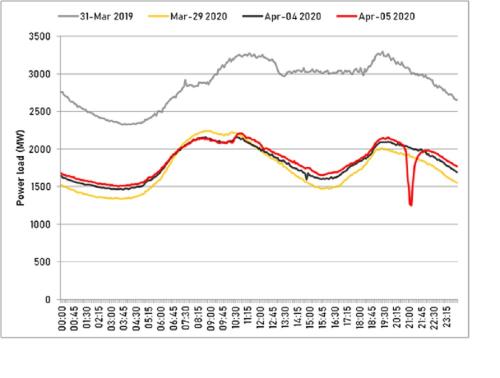 Another interesting thing to note is the city has not started using air conditioners yet, and relative contribution of ACs on the power demand is way higher.

This also shed light on the energy inequality among different domestic energy usage. While light bulbs, used by almost every household in the city, could reduce power demand by 750 MW, ACs could do so by almost three times (2,277 MW), even though only a fraction of Delhi households use them and not everyone switched it off during the 2018 thunderstorm.

The energy challenge posed by air conditioning to the power grid and energy security of the country is immense. There is a dire need to start working towards containing the AC pandemic that is expected to explode as it gets hotter.