2016 was a great year for renewable energy, especially for power generation: REN21

Out of the total capacity added in 2016, 62 per cent of it was from renewable sources 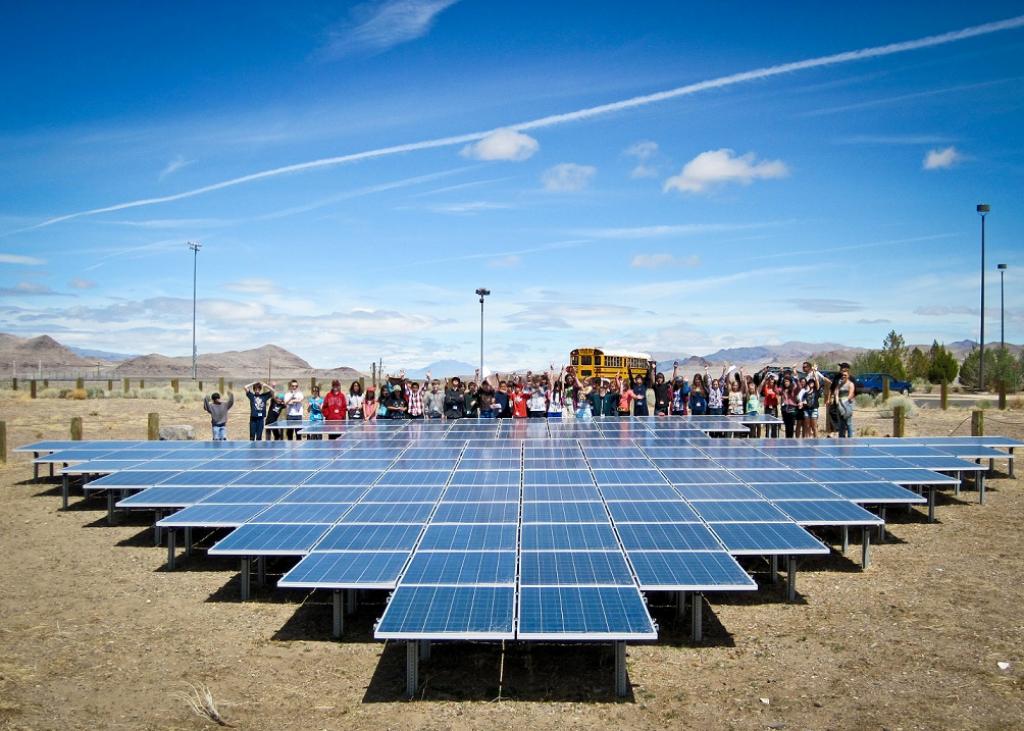 In 2016, most of the new RE capacity was installed in developing countries, mostly in China. Credit: BlackRockSolar / Flickr

RE contributed to an estimated 19.3 per cent of global energy consumption. Most of the new RE capacity was installed in developing countries, mostly in China. In fact, China has been the largest developer of RE in power and heat sector over the past eight years. However, the share of bio-energy in total primary energy consumption has remained more or less the same as 2005, despite a 21 per cent rise in overall energy demand over the last 10 years. 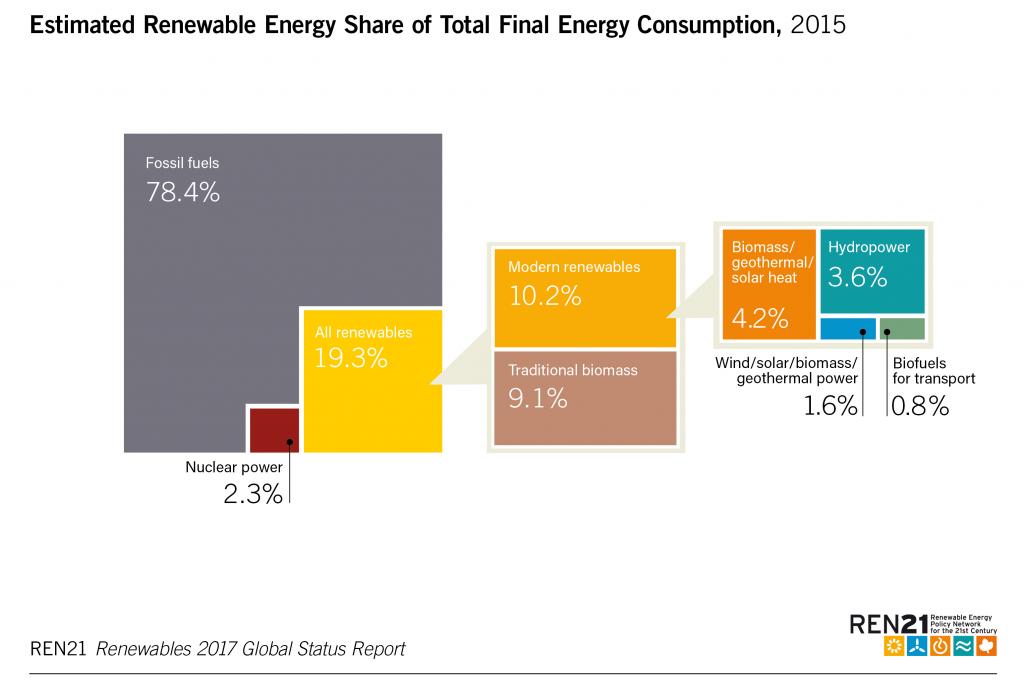 RE installed capacity saw its largest annual increase (161 gigawatts) in 2016 of. Compared to 2015, the global capacity increased by almost 9 per cent to almost 2,017 GW at the end of 2016 as compared to 1,849 GW in 2015. Investment in RE was almost double the investment in fossil fuels and added to US$ 249.8 billion in 2016. This means, world installed more RE power capacity annually than the combined capacities of all fossil fuels.–

Out of the total capacity added in 2016, 62 per cent of it was from renewable sources. Arthouros Zervos, Chair of REN21, said in their press release, “The world is adding more renewable power capacity each year than it adds in new capacity from all fossil fuels combined. As the share of renewables grows we will need investment in infrastructure as well as a comprehensive set of tools: integrated and interconnected transmission and distribution networks, measures to balance supply and demand, sector coupling (for example the integration of power and transport networks); and deployment of a wide range of enabling technologies.” 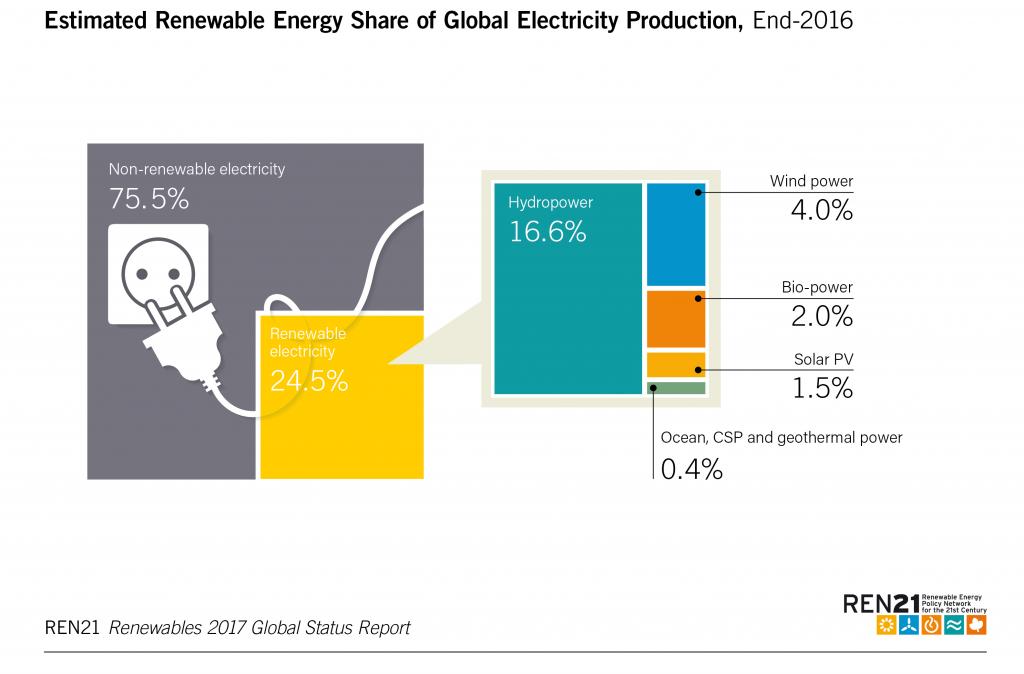 China is the leader in the world in terms of installed capacities of hydropower, wind power and solar PV. When compared with 2015, the installations of solar PV increased by 45 per cent, making a capacity addition of more than 34 GW. Outside China, most of the renewable power generated in Asia is from hydropower, but its share is relatively decreasing as compared to other renewable power technologies, especially solar PV. 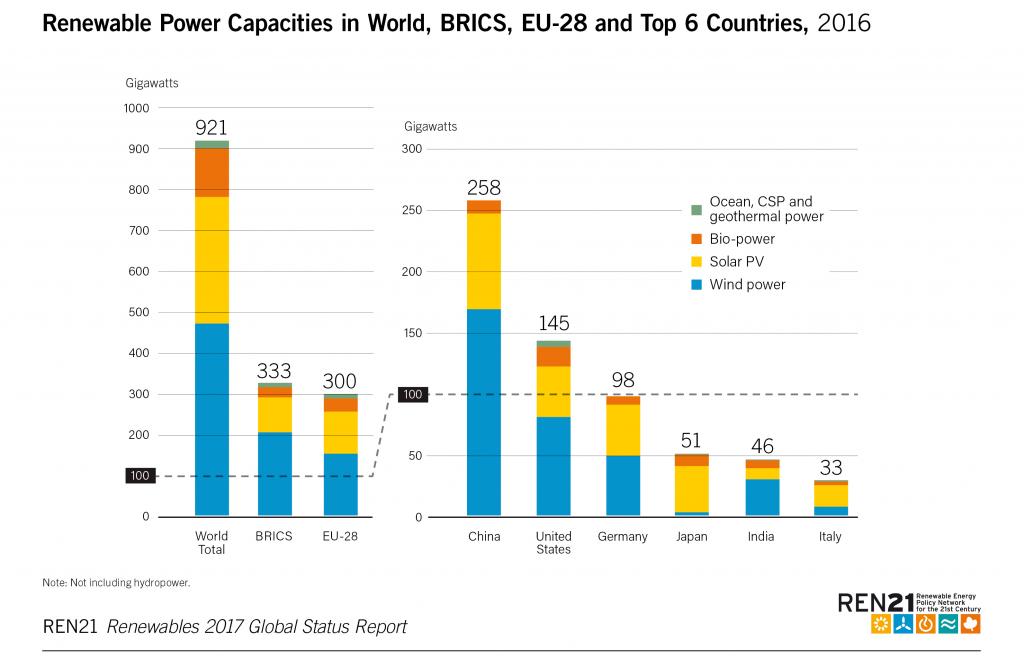 In 2016, total 75 GW of solar PV was added worldwide, taking the global solar PV capacity to 303 GW. This tremendous growth was brought forth because of record price reductions for modules, inverters and structures. There were unprecedented lower bids for wind in Chile, India, Mexico and Morocco. Off-shore wind also saw decline in costs in tenders in Denmark and Netherlands.

The decline in costs has made cost of solar PV competitive with conventional sources of power in some countries. It is a good sign for the renewable sector, however; the sector is still vulnerable to policy changes as some countries like the United States are still trying to protect fossil fuel industry. On the other hand, these low bids have raised questions whether these projects will be financially viable or will these projects ever reach completion.

Many cities, states, countries and other corporations have stated their commitment to meet 100 per cent renewable energy targets not just because of the climate and environmental requirements, but also because it makes more financial and business sense. At COP22 in Marrakesh, Morocco in November 2016, the leaders of 48 developing nations committed to work towards achieving 100 per cent renewable energy supply in their respective nations.

The process of providing electricity access through grid extension alone is taking back seat in countries across the globe as new business models have facilitated the development of off-grid and mini-grid markets. 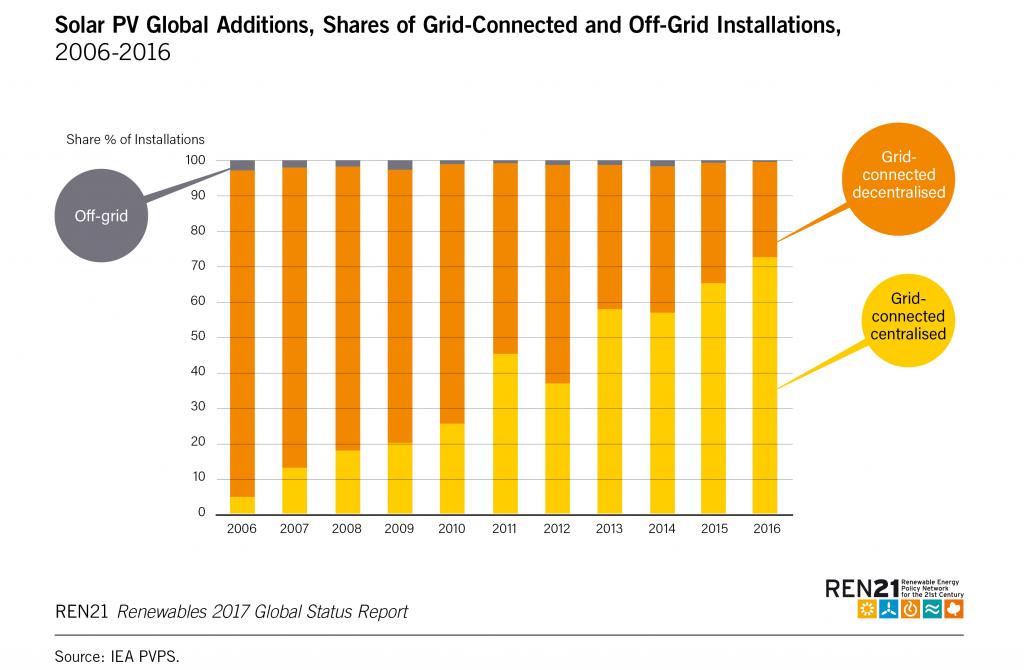 The renewable energy sector employed 9.8 million people in 2016, an increase of 1.1 per cent over 2015. In terms of technology, solar PV and bio-fuels provided the largest numbers of jobs. Employment shifted further towards Asia, which accounted for 62 per cent of all renewable energy jobs (not including large-scale hydropower), led by China. 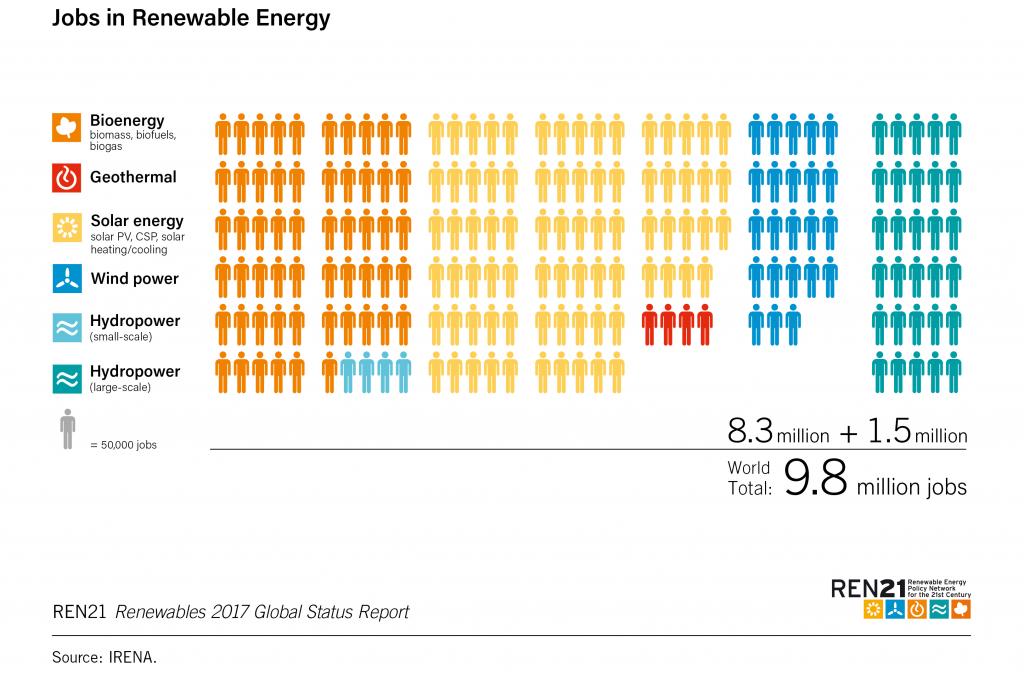 Renewable energy contributed only nine percent to the total global heat demand. In 2016, majority of renewable heat continued to be supplied by biomass, with smaller contributions from solar thermal and geothermal energy. Solar was used in process heating in beverage as well as mining industry. District heating systems started using solar thermal energy for larger installations since the heat also provided flexibility to electricity systems by storing thermal energy.

Liquid bio-fuels provided around four per cent of world road transport fuels. Electrification of the transport sector increased in 2016 but not at the pace of the power sector. This is primarily because policy support for the transport sector lags behind. There are no direct links between renewable energy and electric vehicles (EVs), but with increasing share of renewables in grid power.

Despite many positive trends in the renewable energy sector, it is not transitioning at a pace that is needed to meet the targets committed in the Paris Accord in December 2015 in COP21. The Nationally Determined Contributions (NDCs) of the 117 countries combined would increase the global temperature between 2.3 to 3.5 degrees Celsius. Even though the power sector is changing its ways and getting more and more renewable energy in the mix, the other energy-consuming sectors are not keeping up. The investment in renewables fell 30 per cent in developing and emerging countries and 14 per cent in developed world. 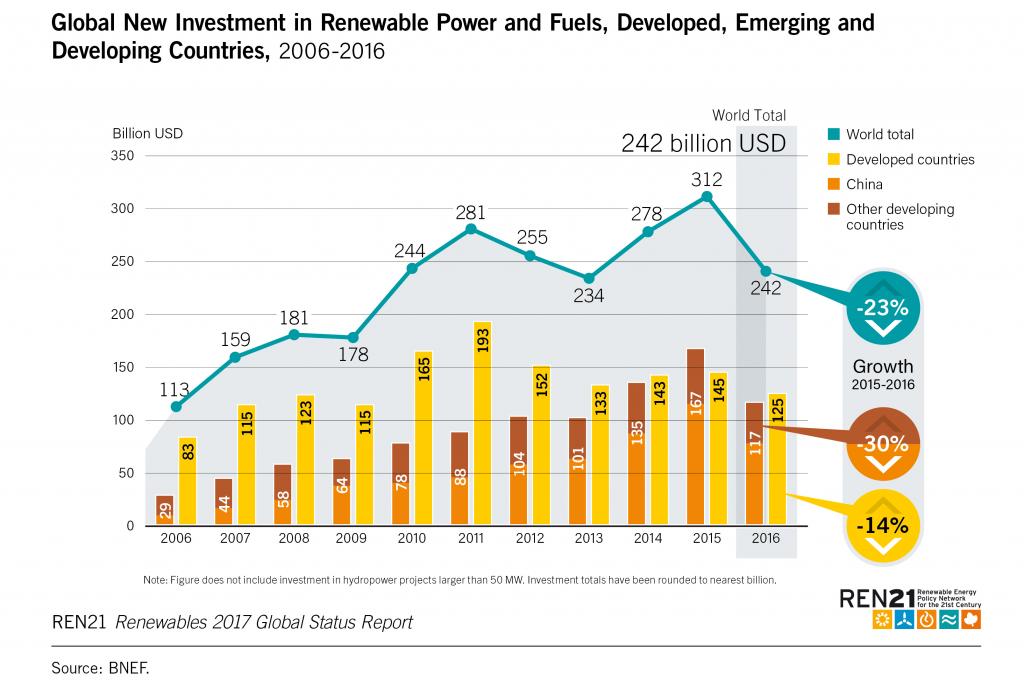 Policy support in countries has been mostly focussed on power sector and there is a need for more comprehensive energy policy focusing on low-carbon economy and not just electricity. There is often confusion about ‘energy’ and ‘electricity’ in an economy and it is important to transform the energy sector which includes fuel for cooking, heating, cooling and transport and not just electricity in the country. Christine Lins, executive secretary of REN21, explained in the release, “The world is in a race against time. The single most important thing we could do to reduce CO2 emissions quickly and cost-effectively, is phase out coal and speed up investments in energy efficiency and renewables. Trump’s withdrawal of the US from the Paris Agreement is unfortunate.  But the renewables train has already left the station and those who ignore renewables’ central role in climate mitigation risk being left behind.”