About half of the people in Africa have access to electricity, but the remaining half i.e, about 580 million Africans, still rely on inefficient and expensive energy sources. What’s even worrying is the large gaps and inequalities among income groups, varying across geographical locations, with more people in urban areas having access to electricity compared to those in rural areas.

The average urban electrification rates in Central, East, Southern and West Africa was about 71 per cent compared with the rural electrification rates of about 22 per cent in 2016, reveals the Africa Sustainable Development Report 2018. While 32 per cent of urban population in Africa, excluding North Africa, has access to cleaner fuels for cooking, around 90 per cent of the rural population cooks with charcoal.

This biennial report was released at the 2018 African Economic Conference (AEC) recently at Kigali, Rwanda. North Africa is the sub-region with the largest access to electricity (in absolute terms and by proportion)–around 297 million people (99 per cent of the population) have access. However, access rates decrease rapidly in the rest of Africa, where the majority of Africa’s population lives — 56 per cent and 48 per cent in West and Southern Africa respectively; 37 per cent in East Africa; and only 20 per cent in Central Africa—the lowest rate of access to electricity globally according to International Energy Agency. 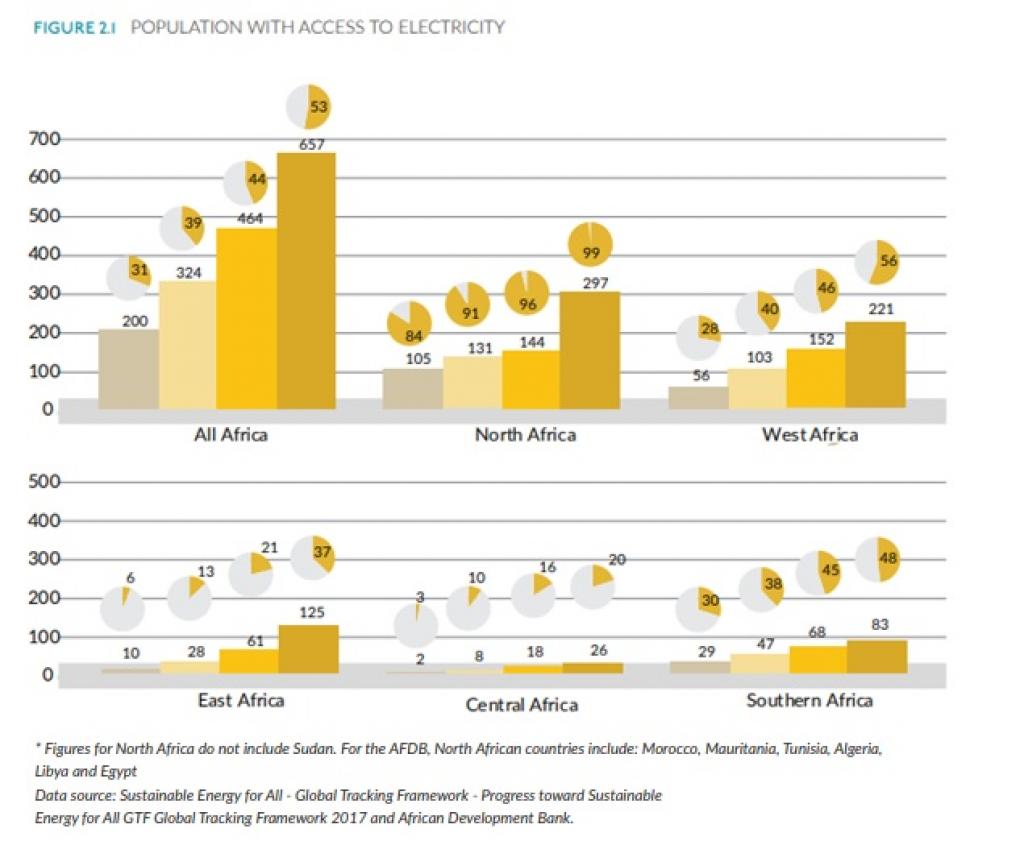 Lack of access to electricity will affect education, which is critical to overall social and economic growth, shows the report. It says that in Africa (excluding North Africa), only 35 per cent of schools have access to electricity. This translates to 90 million children attending school without electricity.  Lack of sufficient electricity limits utilisation of lifesaving equipment and services by African hospitals, thus putting several human lives at risk. In fact, high maternal mortality rates are common as a result of poor electrification, especially in rural areas.

The use of traditional biomass for cooking, lighting and heating has a negative influence on the health and quality of life for many Africans. Only around 25 per cent of the African population has access to clean cooking solutions and the rural-urban gap continues to exist. While 32 per cent of urban population in Africa, excluding North Africa, has access to cleaner fuels for cooking; around 90 per cent of the rural population cooks with charcoal. Approximately 600,000 Africans, mostly women and children, die every year from inhaling toxic fumes due to the use of wood or feedstock.

The absolute number of people without access to energy-efficient cooking stoves continues to rise in Africa, with around 780 million people cooking with solid biomass. Limited, unreliable and costly power supply is a major barrier to continued economic progress.  According to a recent study, a 10 per cent increase in generation capacity leads to 0.07 per cent increase in GDP and 0.4 per cent increase in employment. Electrification was also found to be associated with higher household incomes.

So, despite widespread progress, the global population living without electricity will become increasingly concentrated in this region, projects the report citing the International Energy Agency.

The cost of electricity in Africa is very high, in part due to reliance on thermal generation using heavy fuel oil and diesel fuel. The high cost is also attributed to higher generation and distribution inefficiencies and losses. Many African countries recorded losses of over US$0.25 per kWh sold—as well as high connection fees and tariffs, says the report (citing World Bank).

African nations have recognised the importance of affordable and reliable energy for the future of Africa — 34 countries have mentioned energy access as a key enabler for development in their climate action plans. The average annual investment required to achieve universal access by 2025, is between US$ 65 billion and US$ 90 billion.

A key energy investment initiative like the New Deal on Energy for Africa, developed by the African Development Bank Group (AfDB), aims to achieve universal access by 2025 by mobiliSing up to US$50 billion of additional funding in the sector.

Improving rural access to modern energy is essential while addressing the rural-urban disparities. Hence, the report asks the African governments, supported by partners, to provide incentives to drive investments in renewable energy. The role of governments is critical for growth of the off-grid sector, says the report, calling upon each country to develop tailored policies and technologies.